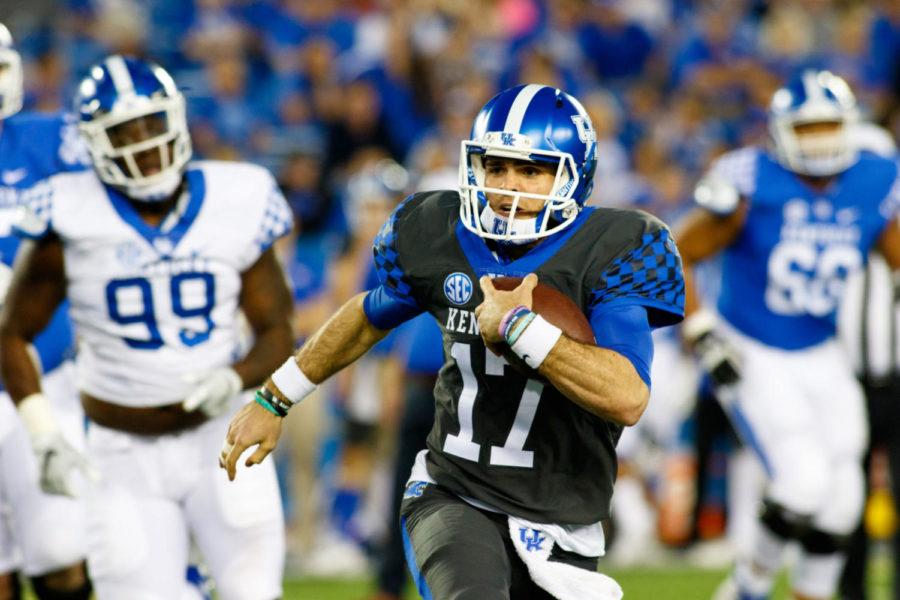 After the loss of senior Stephen Johnson, it’s up in the air who will be starting at quarterback next season for the UK football. Friday’s spring game, though, showed fans and coaches alike who’s battling for the quarterback spot.

Four quarterbacks earned reps in Friday’s scrimmage while the Blue (offense) squad defeated the White (defense) 45-29. None of the quarterbacks who played today have had any prior game experience at UK.

Sophomore Gunnar Hoak was the first quarterback to see the field under the Friday night lights. Hoak redshirted his freshman season and came to Kentucky in 2016 as the ESPN four-star prospect. The Dublin, Ohio, native went 14-25 on 121 yards overall. Hoak says his strong suit in Friday’s scrimmage and in spring practice was his ability to stay in the pocket and keeping his eyes down the field.

“One of my biggest goals was getting in the film room more often this spring and going through and seeing what I did so I can put it together on the field,” said Hoak.

The quarterbacks switched every offensive possession, and the second one to see the field was sophomore Terry Wilson, who went 10-24 on 131 yards total.

“We’ve been competing, every day,” said Hoak on the quarterback battle this offseason. “We’re not trying to force anything, we’re just going out there and playing football.”

Along with Hoak, Wilson also said one of his biggest strides this spring has been getting in the film room and working on his mistakes and correcting them on the practice field.

Redshirt-freshman quarterbacks Danny Clark and Walker Wood both saw playing time in the fourth quarter of the game. Wood went 3-4 and Clark went 8-13 with one touchdown.

Kentucky head coach Mark Stoops was pleased with the performance of his quarterbacks but says it’s “unfair” right now to make a judgment about who’ll see more playing time next season, and that there wasn’t anything that jumped out at him about the two quarterbacks that he hadn’t already seen this spring.

“You could tell we have some options there at quarterback, and we need all the reps we can get,” said Stoops. “They both (Wilson and Hoak) have done some good things, and both need improvement in certain areas.”

Stoops says most of it depends on the players surrounding the quarterback that can “give them some time, create space, and make tough catches.”

While the battle of the quarterbacks will continue throughout the remainder of the spring and summer, it’s something to keep an eye out for as the Cats head into their 2018 season.