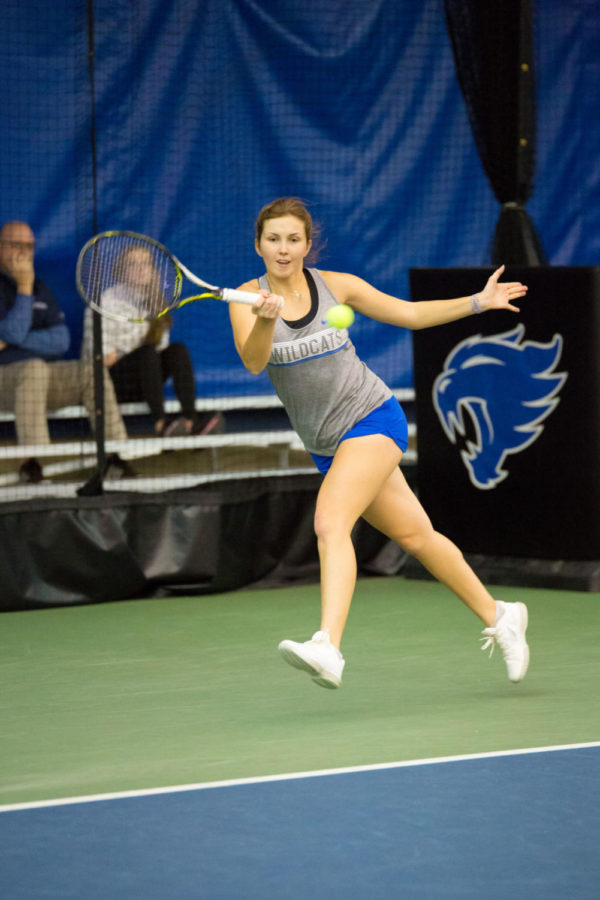 Entering the SEC Tournament, the No. 24 ranked Kentucky women’s tennis team looked to take down No. 36 Texas A&M, a team the Wildcats had defeated just 13 days prior.

After Thursday’s action, the Cats will instead be awaiting an invitation to the NCAA Tournament, as they fell to the Aggies 4-3 in a tightly contested second round match.

The Cats, who claimed the No. 8 seed in the SEC Tournament with a 14-9 overall record and a 6-7 conference record, captured the doubles point to start the day.

Riley McQuaid and Iulia Ivascu quickly dismissed Brianna Tulloch and Diana Tkachenko 6-1 to claim the first set of doubles for A&M. Mami Adachi and Justina Mikulskyte responded for the Cats, taking victory 6-4 over Tatiana Makarova and Macarena Olivares to make it one set apiece. Kentucky’s Emily Fanning and Lesedi Jacobs beat the No. 59 ranked duo of Eva Paalma and Domenica Gonzalez 7-5 to clinch the point.

McQuaid kept rolling in her singles match for A&M, winning 6-3, 6-3 over Tkachenko and knotting up the overall score at 1-1. Adachi did the same, going 6-4, 6-4 against Eva Paalma to put a second point on the board for Kentucky.

In the only matchup of ranked foes, No. 76 Olivares rebounded from her doubles loss to defeat No. 118 Mikulskyte 6-3, 6-4 to get the Aggies second point. Her teammate Gonzalez rebounded as well, claiming a 6-4, 6-4 win against Fanning to take a 3-2 lead for the No. 9 seed Aggies.

Needing a point to stay alive, Jacobs came through for the Cats with a 2-6, 6-2, 6-3 victory over Makarova. This brought the fate of both teams into the hands of A&M’s Ivascu and Kentucky’s Tulloch.

It was clear from the beginning of their battle that the players were evenly matched. Ivascu took the first set 7-5 for the Aggies. Tulloch had her back against the wall and answered, forcing a third set after a 7-6 (13-11) victory in the wildly entertaining second set.

With everything resting on their shoulders, both players fought valiantly throughout the finale. Ivascu would finally emerge with a 7-5 win, knocking both Tulloch and the rest of the Cats out in the process.

For Kentucky, the loss marked their third in a row since defeating Texas A&M back on April 7. They will now look forward to the announcement of the 64-team NCAA Tournament bracket, which will take place on May 1 at 5 p.m. on NCAA.com.

The team is expected to make their fifth straight appearance in the field.