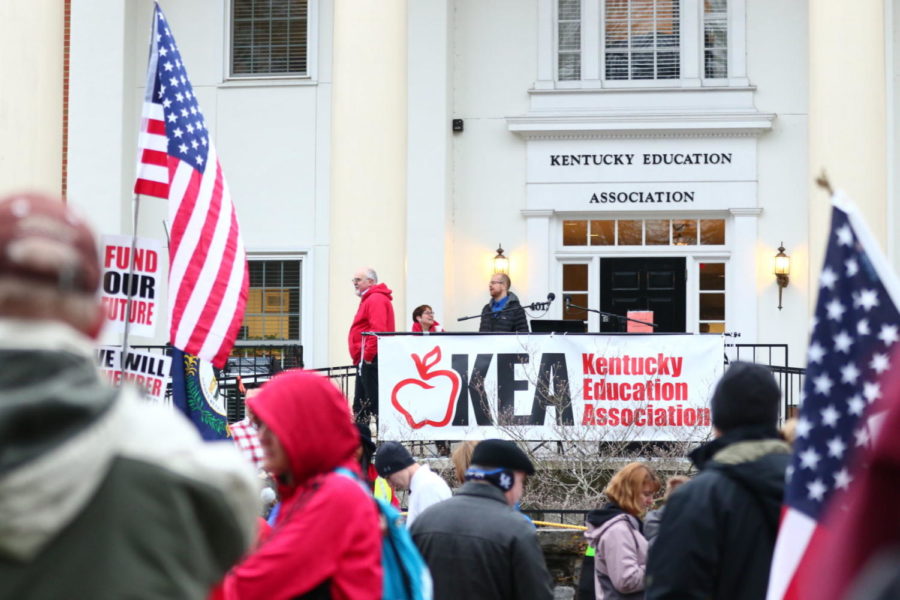 Teachers and other supporters met at the Kentucky Education Association building on Monday, April 2, 2018 in Frankfort, Kentucky to protest the surprise pension bill.

Bus loads of marchers filled Frankfort this morning to protest a surprise teacher pension bill that swept through the Kentucky legislature last week, as well as possible cuts to Kentucky’s education budget.

It was elbow-room-only as innumerable bus loads of educators and supporters packed into the Kentucky State Capitol building to await news on the state’s pending budget. According to the Lexington Herald-Leader, legislators plan to vote on the budget and revenue bills today.

According to language in the budget proposal, university leaders may reduce tenured faculty if universities are downsizing due to budget cuts, the Lexington Herald-Leader and Courier Journal reported.

At 11 a.m., two hours after the teachers’ rally was scheduled to begin, protesters were still cheering, shouting and booing inside the Capitol rotunda and on the flights of stone stairs that lead up to the House and Senate chambers.

Much of the area around the Kentucky State Capitol Building was at a standstill as thousands of teachers, students and supporters marched from the Kentucky Education Association to the capitol steps.

Capital Avenue, the main street leading up the Capitol building, will be closed Monday from 8 a.m. to about 3 p.m., Frankfort Police said via Facebook.

According to Kenny Colston, a former Kentucky Kernel editor, all 120 counties in Kentucky had school closings on Monday.