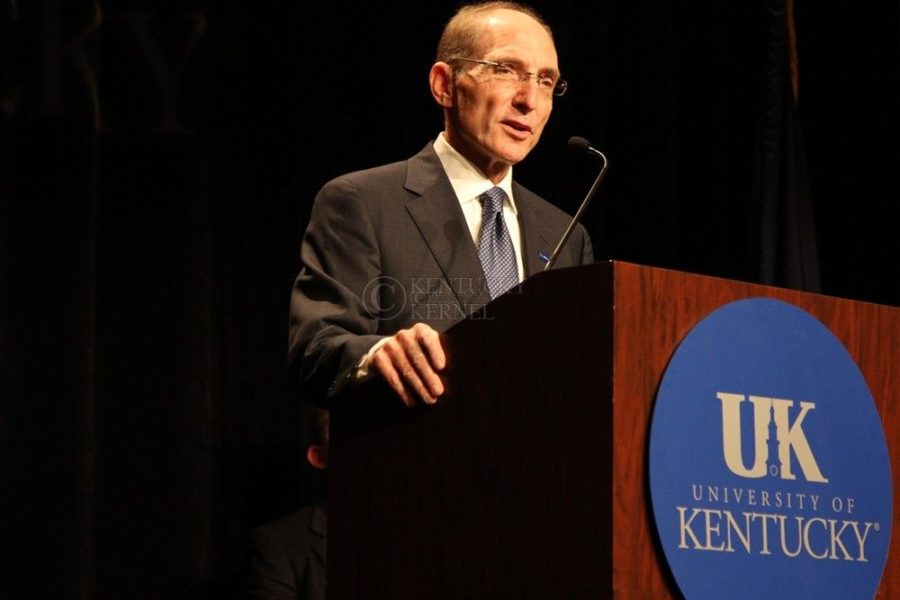 As millions of dollars are being cut from postsecondary schooling in the state of Kentucky, UK wants to continue the preservation of student and faculty wellbeing.

On Monday, April 23, UK President Eli Capilouto addressed the University Senate regarding details to budget changes for the fiscal year 2018-19 and years to come. This meeting was in accordance to the Kentucky General Assembly’s 2018 session that closed on April 14.

The Kentucky legislature was able to restore $31 million of Bevin’s proposed cuts. This $31 million will be incorporated into a previously agreed upon performance funding formula that was enacted last year. The formula requires that 1 percent of the postsecondary budget be distributed based on a performance-based system to the universities.

“Next year, 1 percent of that base will come out and go through that entire formula again,” Capilouto said. “I think we did well in that $31 million and we performed well.”

UK will be competing with other Kentucky universities for 1 percent of this $31 million through the proposed performance funding formula.

“I think now that the playing field has been leveled we need to know what we will be competing on,” Capilouto said. “Our graduation rates, more diversity, the higher weights for STEM fields, higher weights for low-income students and all the things we care about will draw this formula.”

UK Vice President Eric Monday and Provost David Blackwell introduced a five-year financial plan to generate new revenue through the university, rather than making cuts to UK’s budget and increasing tuition and fees for students.

The five-year financial plan was introduced by creating five concept teams that include more than 60 people from across campus, including instructors, students and other faculty. The concept teams were created under Provost Tim Tracy and have continued under Blackwell. Along with the concept teams, there is a 10-member work group that has supported the teams in the process since November.

“A lot of work there and countless hours since last November,” Blackwell said. “We really appreciate it. It has really sharpened our focus on how we can, not just replace the funds that we are losing from state appropriation, but fund our way towards fulfilling our strategic plan.”

The teams were focused on observing ways to improve enrollment growth, student success, university efficiency, money saving techniques and work that takes place on campus that could be used more efficiently.

“These teams were asked to identify various concepts,” Monday said. “Generated over 30 of them that would help us generate $8 to $10 million in net-recurring new university-wide revenues per team, per year.”

Capilouto also addressed changes passed by the Kentucky General Assembly in postsecondary education, expressing that university employees were no longer able to take higher education classes at other institutions without paying tuition. However, this change will have no effect on the Employee Education Program and the Family Education Program at UK.

“This is an important change because it is very difficult to bear the financial burden of our colleagues from other institutions attending UK classes without sharing in the cost,” Capilouto said in an email sent to campus on April 15.

According to Dr. Katherine McCormick, chair and member of the Senate’s Retroactive Withdrawal and Appeals Committee, programs should not be affected by the budget changes.

“It looks to me that we will not have any programs at UK that will be affected by budget changes,” McCormick said. “I think we are pretty solvent in terms of money that the university has and the ways in which we manage our dollars. I think we are going to be alright and I don’t think we will have any major program reductions.”

Among cuts to the budget, UK was presented $20 million in state bonds to complete more of the research building currently being constructed on Virginia Avenue, currently known as Research Building II.

“I am deeply appreciative of this consideration,” Capilouto said.

While some faculty were still concerned about tenure, Capilouto has ensured his duty to tenure and principles surrounding despite changes to budget.

“We have a deep commitment to tenure at this university,” he said.