A million-dollar opportunity is one screenplay away 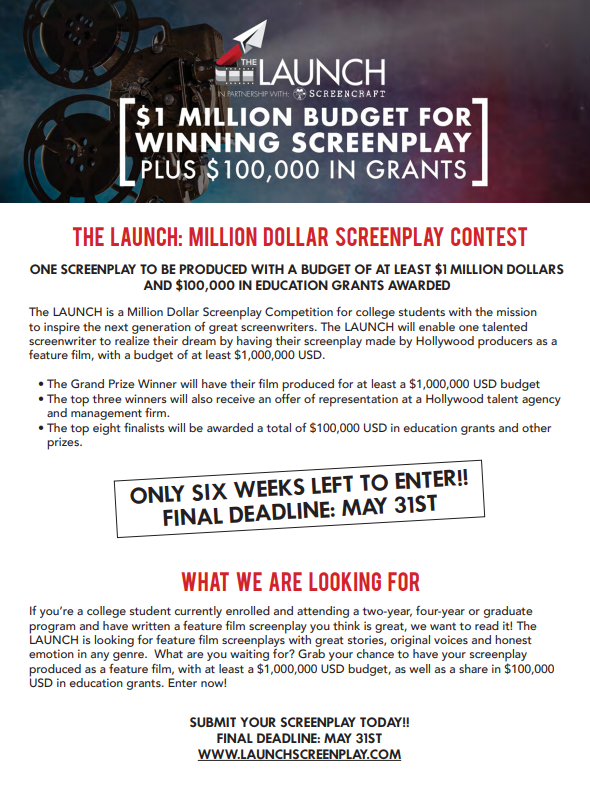 The LAUNCH will be taking submissions from college students for its a million-dollar screenplay competition until May 31.

For college students looking for a path into the film industry, The LAUNCH is the place to look.

Film producers Zachary Green and Jason Shuman co-founded The LAUNCH, a screenplay competition in which the first-place winner will have his or her screenplay made by Hollywood producers as a feature film with a budget of $1 million.

In addition to the first-place winner, the top three finalists will be granted an offer of literary representation at a Hollywood talent agency and management firm, and the top eight finalists will receive a total of $100,000 in education grants and other prizes. If a grant is awarded to a winner who is no longer in school by the time they announce the top screenplay, the grant will be given as a cash prize in the form of a check.

To submit a screenplay, an applicant must be at least 18 years of age and an enrolled college student at an accredited two-year university, four-year university or graduate program anywhere in the world. Each submission will be read by experienced industry screenplay readers that will give feedback on each submission.

A total of nine judges, some of whom are producers, directors, writers, actors and authors, will review and decide on the submissions. These judges will score the screenplays based on the story, creativity, character development, voice originality and honest emotion.

After the top 25 percent of the submissions are determined, the submissions will move to the next round of the competition and will once again be read with further evaluation and scoring. After the initial evaluation round, the top 25 scripts with the highest scores will then be evaluated by The LAUNCH’s judging panel, which will decide the top eight potential winners.

Each submission must be authentic and original work. All rights must be owned solely to the individual submitting the screenplay, or, if the work is a part of a writer’s team, it must also be credited to everyone on the team on the title page. If a writing team is chosen as a winner, prizes will be distributed according to the percentages provided by the team in the submission.

To enter a submission or for additional information, visit The Launch’s website.