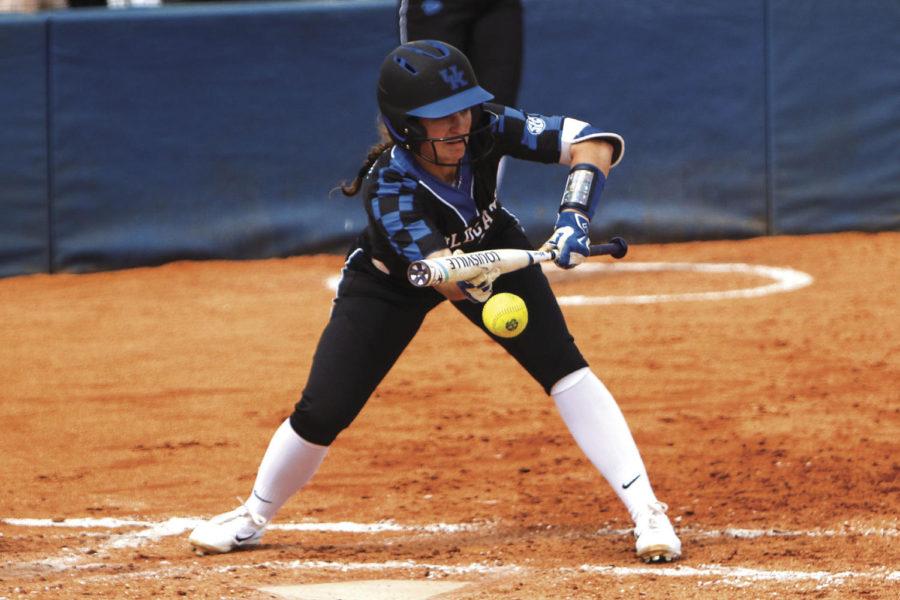 Kentucky Wildcats outfielder Sarah Rainwater lays down a sacrifice bunt during the second inning of the game against the Florida Gators at John Cropp Stadium on Saturday, April 15, 2017 in Lexington, KY. Photo by Addison Coffey | Staff.

UK softball’s Sarah Rainwater has been a defensive presence for the Cats over the last several years. Her position in center field has been rarely taken over by a teammate, and she’s been particularly know to catch difficult deep hits.

Unfortunately for Rainwater and UK’s defense, she suffered a torn ACL in a practice, sidelining her for the season. Cutting her junior season short was a major blow to the Cats, as she was in a tight competition with sophomore Bailey Vick as UK’s best defensive outfielder.

“Since the loss at Super Regionals in Oregon last spring, we have been working exceptionally hard towards our goal, which is nothing short of playing in Oklahoma City,” Rainwater said in a statement. “I will continue to work hard to that goal along with my teammates, but now just from a different perspective.”

Rainwater has been known to struggle at the plate, averaging a batting average under .250 for the last two seasons. She was hitting .182 before her ACL injury this season. Head coach Rachel Lawson, however, said that Rainwater was having “her best season yet at the plate.”

What does this mean for the Cats? As they sit at 3-8 in the brutal SEC, the lack of outfield defense for the Cats will be a problem. Vick is now the only starting outfielder from last season who will play out the rest of this year, as Breanne Ray graduated after last season.

Rainwater should be ready to go for next season, but UK will miss her defensive presence in the meantime. It hasn’t yet been announced who will regularly start in her place as the season carries on.