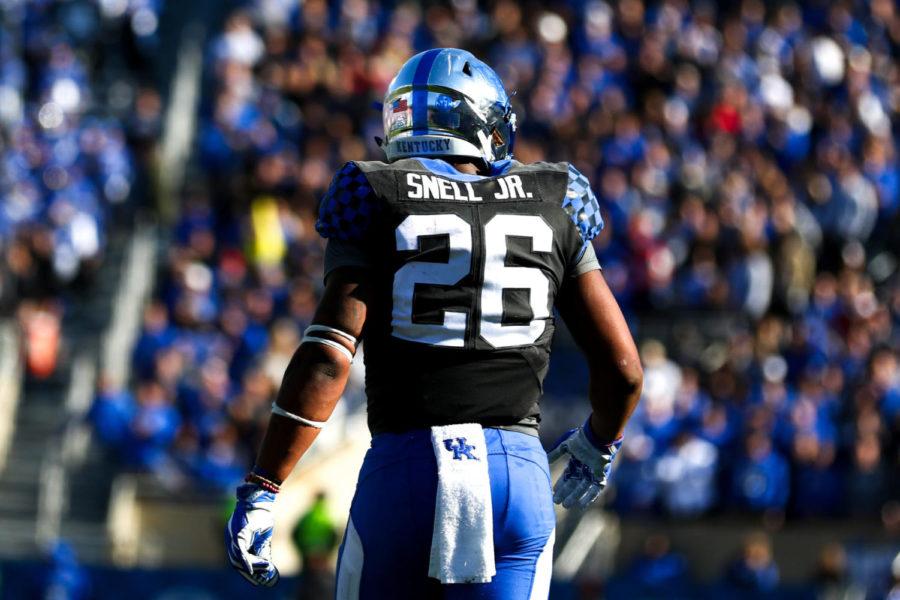 Kentucky Wildcats running back Benny Snell Jr. (26) walks off after a play during the Governor's Cup game against Louisville at Kroger Field on Saturday, November 25, 2017 in Lexington, Kentucky. Photo by Arden Barnes | Staff

​With one week remaining until the Blue-White game, the Cats spent another day out on the field scrimmaging against one another. While today’s practice wasn’t open to the media, we got an idea of what transpired through the eyes of Coach Mark Stoops and some of the players.

After impressing in Thursday’s open practice, the offense came back even stronger today. It was clear that they stepped up to the challenge after a rough week to end March and were looking to change the narrative as April arrived.

“They were physical, made competitive plays and just had an attitude about them,” Stoops said. “The defense didn’t match the intensity of the offense. Right, Benny?” he asked just as Benny Snell walked past the media.

“Yes sir… not at all,” he replied with a grin before heading inside the locker room.

Offensive players said they heard from the defense throughout the week, which motivated them to pick up their game.

“They came out and had a good day on Saturday and were talking trash… then we come out and we have a good day,” said quarterback Gunnar Hoak. “That’s what spring ball is for, it’s for it to go back and forth like that, just for our team to get better in general.”

“We scored almost every drive,” Snell said with another grin once he got to the podium. “The OL did a great job… we were just moving the ball. Gunnar was on point, so it was a good day.”

​What Snell adds to the offense is enormous. With his sitting out last week, there were some lackluster performances on that side of the ball. His return today coincided with the increased intensity and better execution.

​“He was huge today for them,” said linebacker Josh Allen. “He’s a heck of a player, he’s a hard player to play against.”

​“He makes a huge difference… it’s hard to quantify,” Stoops said. “He has a chip on his shoulder and that’s contagious.”

​With both Jordan Jones and Jamin Davis out for the spring due to injury, freshman DeAndre Square has been filling in at inside linebacker for the past few practices. The way he has played has been eye-popping to witness, and it motivates other players.

​“He’s a baller,” Allen said. “We were watching film… and he was just to the ball every play.”

“I came up to him and was like, ‘“You need to keep doing what you need to do,’” Allen said.

​Many players typically invest a lot of extra work throughout the offseason to improve their game. A few that did this year are seeing the results they have striven for so far.

​“I wanted to see my speed change, and… be a smarter runner,” Snell told the press. “I feel like I’ve definitely gotten faster.”

​“I’m trying to know different people’s positions… If I know everybody’s role, that means I can do my role even better,” he said.

​He wasn’t the only one who talked about the advantage of additional studying and workouts.

​“My biggest thing was working on my flexibility,” said tackle George Asafo-Adjei – known as “Big George.” “It makes you faster, it makes you stronger, it makes you last longer on the field, so… it helps a lot.”

​“I feel like I got bigger, I got stronger I got faster. So, I feel more comfortable…” Allen added. “I know what I need to do to set hard edges and be able to pass rush a little more.”

​UK fans will get their first chance to see these improvements on the field at the Blue-White game, which takes place at Kroger Field next Friday. Start time is 6:30 p.m.