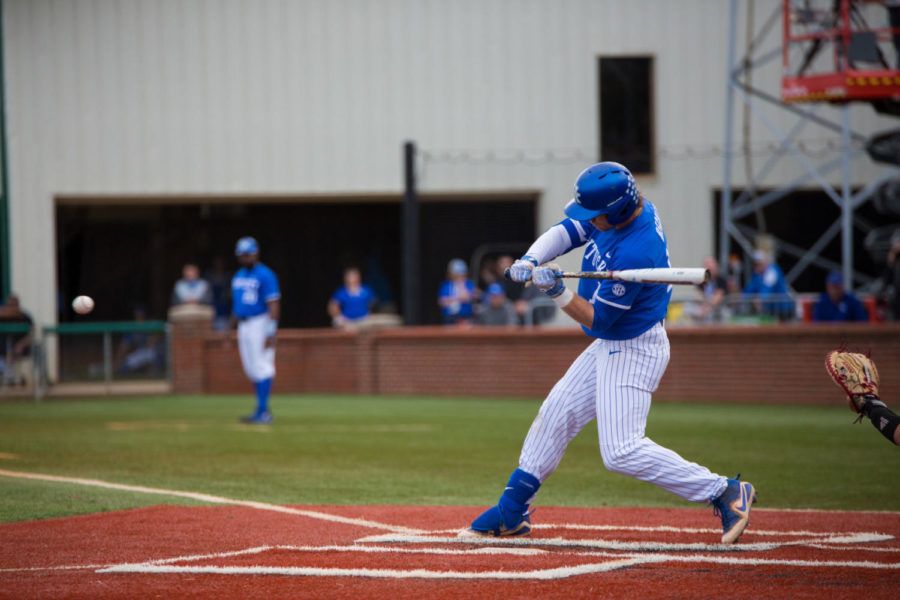 University of Kentucky senior Luke Becker gets a hit during the game against Louisville on Tuesday, April 3, 2018 in Lexington, Ky. Photo by Jordan Prather | Staff

The No. 8 UK baseball team battled the Western Carolina Catamounts on Wednesday for only the second time in program history and the hard-fought game came down to the last few innings with UK coming out on top, 7-5.

Before the game, it seemed it would be an easy win for the Cats on paper, but it was a hard-earned victory for the Cats. The Catamounts were 3-27 on the season and one of the first non-ranked opponents the Cats have come dangerously close to losing to.

Freshman Daniel Harper took the bump in his eighth performance of the year. Harper did not have his command for the second week in a row and the bullpen was utilized early.

The Cats took the lead in the third inning with a two-run RBI single from UK’s first baseman Troy Squires.

After a leadoff single and double in the fourth inning, the Cats put two more runs on the board with Alex Rodriguez’s double over the right fielder’s head that gave UK some insurance.

That was just one of three doubles Rodriguez had on the night, as he went 4-5 at the plate with three doubles, two runs and two RBI.

The Catamounts answered with their own two runs in the bottom of the inning, trimming UK’s lead to two. After four hits, Harper’s day was over and the Cats brought in veteran Brad Schaenzer to put out the flames.

Schaenzer escaped the threat but failed to do the same in the fifth inning when the Catamounts came within a run of tying it up.

UK took the lead for the last time in the seventh inning with Luke Becker’s blast to left field. The pitching also kept Western Carolina from committing any more damage.

Becker has reached base in every game this season.

Ryan Johnson made the game-winning catch and secured right-handed closer Chris Machamer’s fifth save of the year.

Despite the early pitching struggles, the offense thrived. All nine batters in the lineup reached base in the matchup and Rodriguez had his breakout game with the Cats. He was recently added to the lineup at third base and has already shown some prowess with his defensive abilities.

This was an important win for the Cats as the first game of their four-game road trip. They head to Athens, Georgia, this weekend to take on the No. 18 Georgia Bulldogs.

The Bulldogs are currently 8-4 in conference play and 24-9 overall.