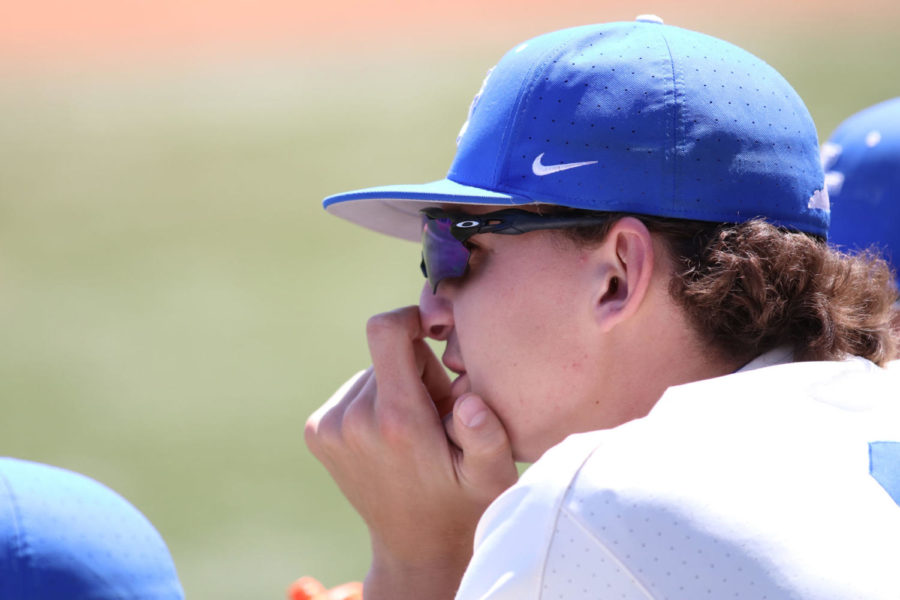 Junior Sean Hjelle watches from the dugout during the game against Florida on Saturday, April 21, 2018 in Lexington, Ky. Kentucky won 3-1. Photo by Chase Phillips | Staff

In the UK baseball team’s seventh consecutive SEC Tournament appearance on Tuesday, the Cats fell short to the Auburn Tigers by a final score of 4-3 in extra innings.

Coming into the game, the Tigers were 3-0 all-time in SEC Tournament games against the Cats.

The extra-inning finish promised to hurt either team as the tournament is about strategy every year. Each team’s pitching staff is expected and needed to go deep as the week plays on and both the Cats and Tigers were forced to use more than they would have liked to.

UK had to use three pitchers, including what would have been two potential starters for the week ahead.

The starting pitchers were chosen a bit late but it played out as a freshman matchup between UK’s Daniel Harper and Auburn’s Jack Owen, both of which had high ERA’s.

Harper only pitched 2.2 innings after giving up four hits, three earned runs and one walk. Sean Hjelle and Zack Thompson would close out the game for the Cats.

Owen also got off to a rough start by giving up Kole Cottam’s 19th home run of the season in the first inning, the league-leading. Owen pitched 2.2 innings like Harper and allowed two hits, one run and three walks.

It wouldn’t take long for Auburn to tie the game as Auburn’s Will Holland hit his own home run in the bottom of the inning. The shot was Holland’s third home run in the last two games and 11th of the season.

Auburn took the lead in the bottom after Daniel Harper got himself in a bit of a situation and put up two more runs.

With two outs in the third, the ball was passed to Hjelle, who pitched a total of 7.1 innings in the relief effort. Hjelle was solid with no walks and nine strikeouts in 7.1 innings and kept the Tigers offense at bay.

In the top of the fifth, the Cats closed the gap to one run with Luke Becker’s RBI groundout.

UK would tie the game late off Cottam’s two-out double to right-center field that brought home Alex Rodriguez to tie the game. The Tigers did not tie anything together with Hjelle on the mound in the bottom of the inning and sent it to extras.

However, it didn’t take long for the game to end as the Tigers eventually walked-off in the 11th inning to send the Cats packing for Lexington.

The first round, single elimination loss knocked the club out of the tournament and the team will head home to prepare for a potential regional appearance. As of right now, that is considered to be a large question mark.

The strong start to the season was promising but the 13-17 record put up in conference play was not what anyone expected. Depending on what the committee focuses the most on, the record could keep the Cats from playing in the NCAA Tournament.

The RPI and strength of schedule may be overshadowed by the 13 losses.