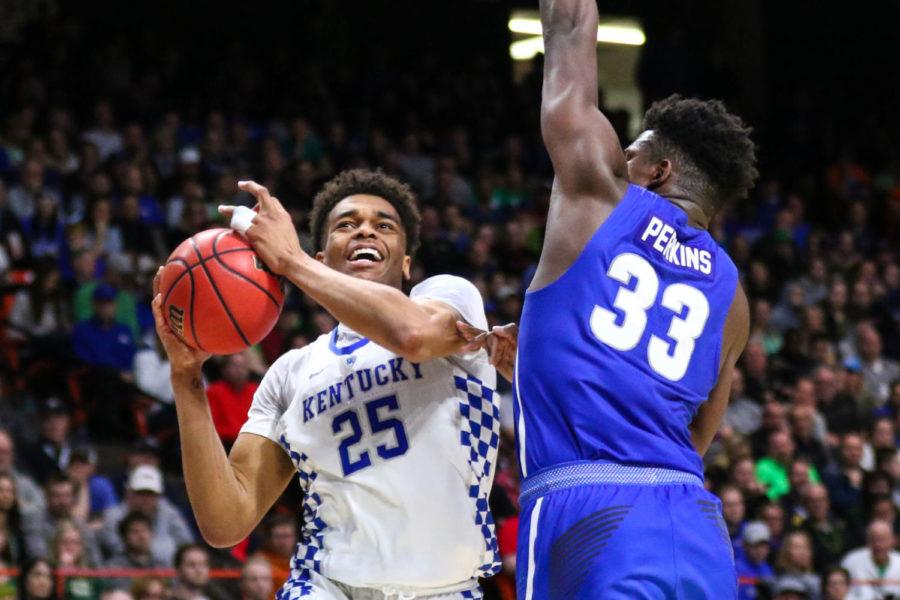 Kentucky freshman forward PJ Washington drives towards the basket during the game against Buffalo in the second round of the NCAA tournament on Saturday, March 17, 2018, in Boise, Idaho. Kentucky defeated Buffalo 95-75. Photo by Arden Barnes | Staff

UK basketball forward P.J. Washington has announced over Twitter that he’ll be returning to UK to play basketball as a sophomore next season.

The Texas native averaged 10.5 points and 5.7 rebounds for the Cats last season and was a key part of their Sweet 16 run. In the final game of the season, a loss to Kansas State, Washington finished with 18 points and 15 rebounds, but missed 12 free throws while playing all 40 minutes of the game.

Washington is added to the list of elite UK forwards for next season, including E.J. Montgomery, Nick Richards and Keldon Johnson.

Teammates Wenyen Gabriel and Jarred Vanderbilt are still deciding whether to return to UK or stay in the NBA Draft for next season.

UPDATE: Gabriel and Vanderbilt have both opted to remain in the NBA Draft.