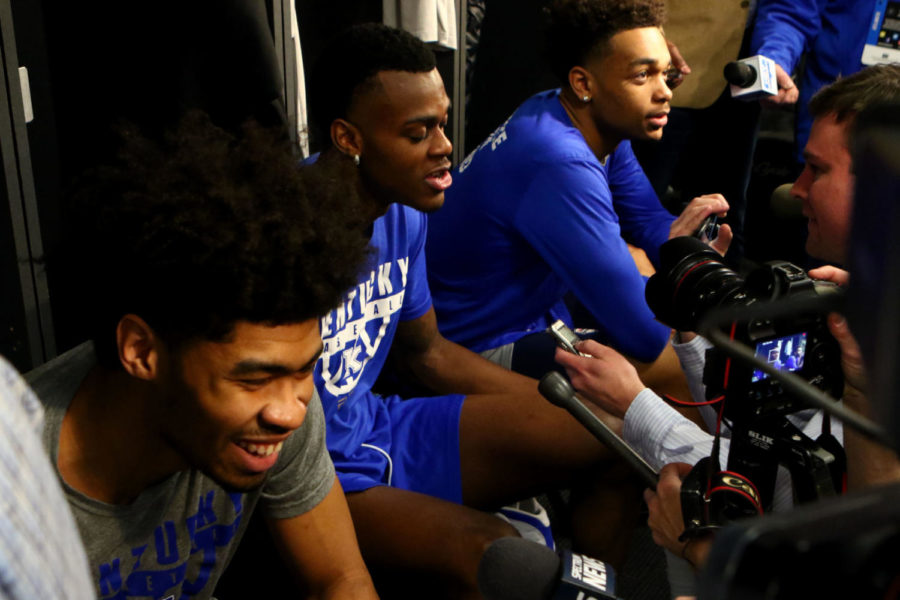 Kentucky freshmen Nick Richards, Jarred Vanderbilt, and PJ Washington talk to the media in the locker room before the open practice on Wednesday, March 21, 2018, in Atlanta, Georgia. Kentucky will play Kansas State in the Sweet 16 game in the NCAA tournament on Thursday, March 22, 2018. Photo by Arden Barnes | Staff

After a freshman season riddled with injury, Jarred Vanderbilt was the final UK basketball player from last year’s team to decide his intent to enter the NBA Draft. The forward averaged 5.9 points, 7.9 rebounds and an assist in 14 games with the Cats, including an 11-point, 15-rebound performance against Missouri in February.

Vanderbilt had to sit out the entire postseason for the Cats due to an injury suffered in practice, and was not part of UK’s run to the Sweet 16.

Vanderbilt’s game is similar to that of Charlotte’s Mangok Mathiang. Mathiang is fourth in the NBA in loose balls recovered per 48 minutes, and averages more rebounds than points. Vanderbilt’s ballhandling is better than that of Mathiang’s, but the hustle is there.

So far, Vanderbilt has been secretive about teams currently looking for him. He’s not listed on any pre-draft workout rosters, and declined to participate in the NBA Combine. The running rumor around sports media members was that a team promised him a pick, convincing him to stay in the draft. It’s unclear which team the rumor is associated with, however.

Vanderbilt did not participate in the NBA Draft Combine. He declined his invitation.

The most favorable mock draft for Vanderbilt is from CBS Sports, projecting him to go 25th overall to the San Antonio Spurs. The Spurs finished third in adjusted rebound percentage in 2017-18, so Vanderbilt would fit in with that ideology.

Most other mock drafts have Vanderbilt going in the first half of the second round, while some place him as low as 52nd. There seems to be a general consensus, however, that Vanderbilt will get selected on draft night.

“I don’t think Jarred would be late second round but I will tell you that his analytics, all those teams that are really looking at the analytics stuff, from those 12 games, were off the charts,” Kentucky head coach John Calipari said.  “NBA motor, goes after balls, a feel for the game, quick twitch, can pass it, can bounce it. Got to get better shooting but my guess is he’ll be gone before the late second. There’s some teams in the late first round and then into the early-middle second.”