‘So excited’ for UK’s new Alumni Gym? Here’s what you need to know. 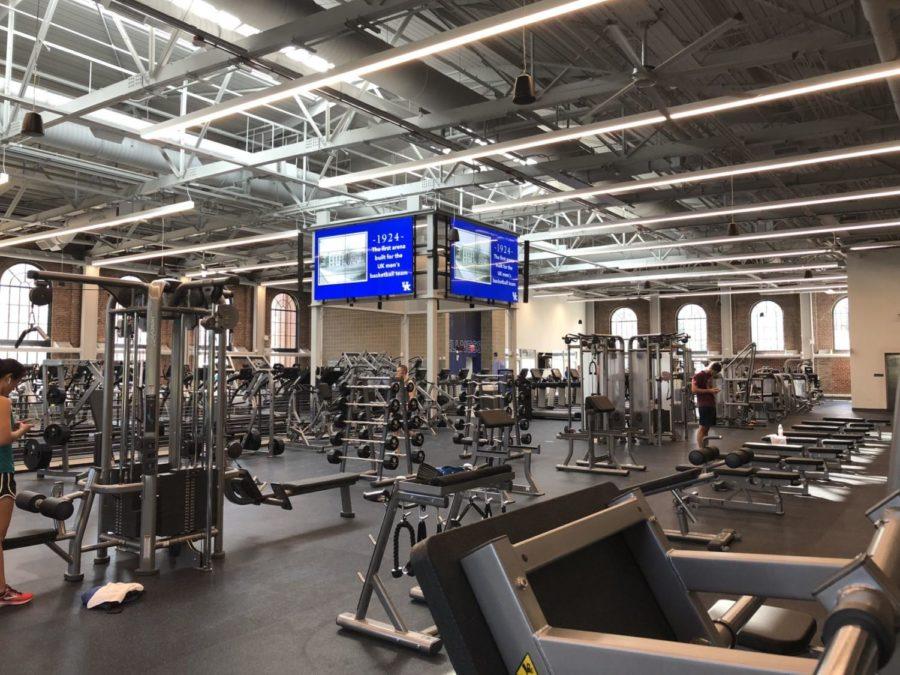 Alumni Gym opened to the public on Wednesday, July 18, 2018. Photo by Jacob Eads

The once familiar clinks and clangs of weights have found their way back to north campus.

The behemoth of a building, coated in historic brick and modern metal features, is a portion of UK’s shiny, new $201 million Bill Gatton Student Center.

The facility comes as part of a response to the calls of students clamoring for an accessible and advertently less crowded place to exercise. The newest addition was designed to take some strain from the campus’s standing Johnson Center which currently serves as UK’s home for all things protein and sweat related, campus officials said.

For the duration of the summer, any student previously enrolled in the spring semester, or in the upcoming fall semester can visit the Alumni Gym with a student ID. Faculty and staff are also welcome free of charge, until August 1.

During the fall, enrolled UK students and BCTC students who pay the recreation fee will get free admission. Employees of UK and BCTC will need a membership—which grants access to both the Alumni Gym and Johnson Center.

The Alumni Gym’s hours will be identical to the Johnson Center.

The Alumni Gym Fitness Center is essentially an homage to the famed 3,500-seat Alumni Gymnasium, that felt the footsteps of legends like Adolph Rupp, when it served as the home of UK basketball.

The facility was originally built in 1924, and was witness to over 200 UK basketball games, before the teamed packed up and moved to Memorial Coliseum in 1950.

Within their first few steps into the Alumni Gym, visitors can draw similarities to the Johnson Center, but the building is full of surprises.

After swiping their ID’s and hitting the turnstiles, students will immediately be blindsided by the building’s new “mat room” built to accommodate UK’s martial arts clubs, and capable of housing UKPD’s self defense training programs.

Before they embark on the main staircase to the second-story, visitors can crane views of the 40-bike group cycling studio, dwarfing the Johnson Center’s bike studio.

The bottom floor of the building also isn’t complete without the group fitness studio, designed to host multiple exercise classes at once.

A trip upstairs will leave students spinning circles as the building’s aged windows shine light on an army of workout equipment.

“I think we have about anything you’d want,” Campus Recreation and Wellness Director Ron Lee said. “We’re still learning how everything things work in here.”

The Alumni Gym houses roughly the same amount of cardio machines as the Johnson Center, but these are just a little more hi-tech, Lee said. Treadmills throughout the gym are fitted with internet access, cable and small screens enabling students to browse Netflix or catch the big game while they burn off a few calories.

The facility’s designers didn’t stop there. Guests can goggle over the four massive television screens that hang in the center of the gym. Just wait until they have UK games playing up there, Lee said.

No matter your fitness experience, gym staff say they can find equipment among the many rows suited to you.

“There’s multiple different options for any type of student. There’s really anything from somebody who’s athletic, to somebody who’s brand new,” Fitness Coordinator Lindsay Thomayer said.

After maneuvering through the mountains of weights housed on the building’s second-story, students might be eager to take a look at the center’s new, and unique, fitness wellness lab. The space is tailored to those working with personal trainers, and will often host special events like the Wonder Woman Strength Program geared towards women, according to Thomayer.

One detail frequent visitors the Johnson Center might notice is missing from the new facility is mirrors surrounding the workout areas. Thomayer said this might upset those who tend to focus on those “mirror muscles.”

Lee expects the Alumni Gym to see around 1,500 visitors a day once the school year is in full force. This is expected to detract from the roughly 1,800 who normally visit the Johnson Center.

“Ever since I’ve been here, we’ve only taken rec space away from North campus. So this is the first time, probably, in the 30 plus years that I’ve been here that we’ve added a new facility to North Campus for fitness and recreation,” Lee said. “These are amenities they should have, and should have close by.”

Lee expects north and south campus residents to stick to what’s closest to them, but says the wildcard will be off-campus students. He says their attendance will be dictated by how easy it is to park at the facility.

Within hours of the building’s launch, students had already taken over the space hoping to be the first to test out the newest equipment. Those who took the early bird’s advice seemed pleasantly surprised by the magnitude of the facility’s resources.

“I just wanted to use everything first, and feel around,” said UK student Hannah Underwood. “I was just so excited.”

Other students praised the administration’s efforts to build an accessible place for them to workout.

“Because this is like the students’ home, I think it’s good to have everything basically in a one-stop-shop,” UK student Christina Walker said.

With kind words from the student body in hand, Lee said there was just one thing left to decide before the campus comes alive in the fall. The building’s name.

“I don’t know what students will end up calling it, and how it will be labeled,” said Lee, referring to the campus’s affectionate names for its buildings like the “JC”, “Willy T”, “JSB” and “Chem-Phys”.

He assured “we don’t try to make up the names.”

Related: Curious about other parts of the new Gatton Student Center? Here’s the need to know on the new bookstore and the new Worsham Cinema.