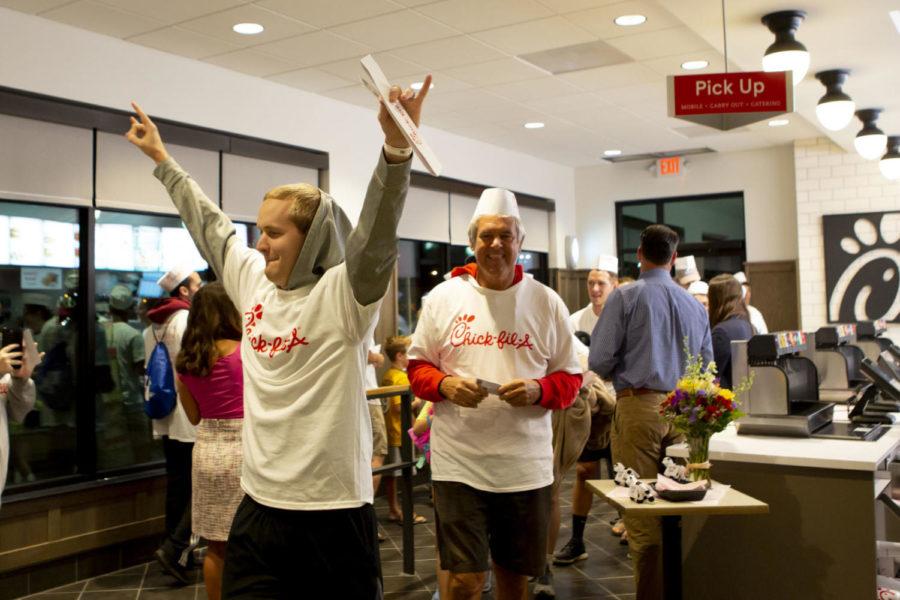 Approximately 100 chicken-lovers camped outside the new Chick-fil-a restaurant on Richmond road on Thursday, August 23, 2018 in Lexington, Kentucky. The campout began at 6am on Wednesday and ended at 6am on Thursday. Photo by Arden Barnes | Staff

Approximately 100 Lexington-area chicken lovers camped out for 24 hours prior to the grand opening of the new Chick-fil-A restaurant on Richmond Road in Lexington, Kentucky. Campers that stayed on the Chick-fil-A premises from 6 a.m. on Wednesday through 6 a.m. Thursday were rewarded with 52 free meals, one for each week of the year.

The campout was only offered to visitors in certain zip codes surrounding the area, which were checked by providing state-issued IDs. However, University of Kentucky students could participate by showing their student ID.

Jacelyn Nesmith and Brett Wasden, both graduate students studying agricultural education in the UK Community Leadership and Development program, along with their professor Dr. Rebekah Epps, participated in the campout.

“We didn’t realize you had to camp out,” said Epps, “I luckily had a few tailgating chairs in my car.”

Wasden and Epps took the risk of being disqualified and went to campus to teach their classes for the day, but upon returning, they were still part of the First 100 participants. Nesmith stayed at Chick-fil-A.

“I actually excused her on the first day of class because by God someone was getting chicken,” said Epps.