Jackson, O-line is now “SEC size” heading into this season 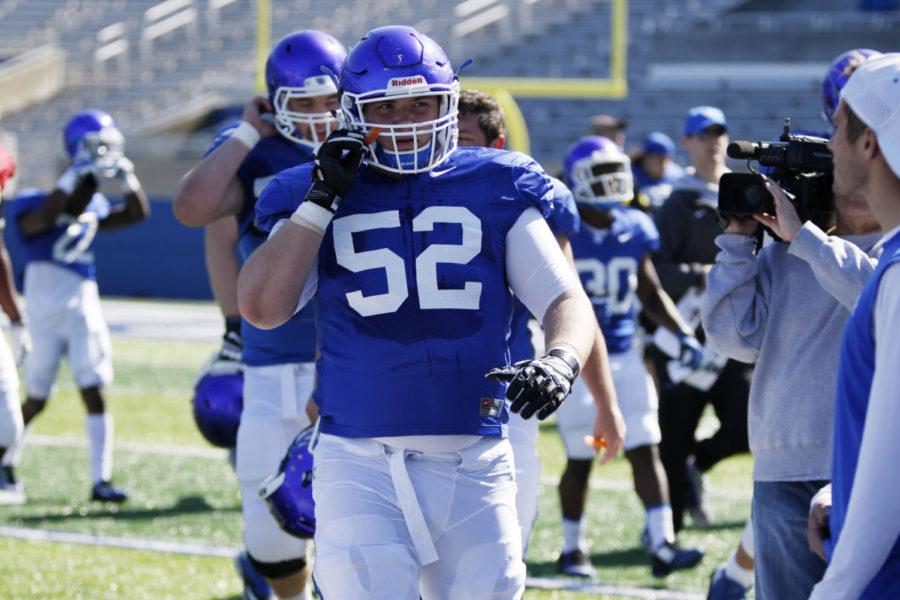 Drake Jackson, center, hustles off of the field during the first open practice at Commonwealth Stadium in Lexington, Ky. on Saturday, March 26, 2016. Photo by Josh Mott | Staff.

As another UK football season rolls around, the team does its annual “We’re way better now” talk to the media and fans. Players and coaches rave about improved techniques and higher skill levels and better footwork, but for the offensive line, they don’t have to do much talking.

The improvement is entirely apparent, and those that meet the players can see the difference.

“SEC size is a real thing,” sophomore center Drake Jackson told media at UK’s Media Day in August. “You get to college, and everybody’s massive, everybody has a low amount of body fat, and everybody’s just fast and big.”

Jackson acknowledged that the team has previously “struggled with” weight, being too small and overwhelmed by teams with much larger players at the line of scrimmage. Jackson and the rest of the Cats made an explicit commitment to getting larger this summer, and it shows.

At the beginning of last season, Jackson weighed 290 pounds. The average size for a college football offensive lineman is 297 pounds, and the SEC specifically is even higher than that. This season, Jackson is listed at 303 pounds, but he said he ranges “from 305 to 310.” He said it was a slow process because he wanted to gain all 20 pounds in muscle and gain all his weight while lifting.

Jackson isn’t the only one who has put weight on, either. Jackson pointed out every position group on Media Day, complimenting their growth and strength in those areas.

He also isn’t the only one raving about the team’s ascent into “SEC size”. Head coach Mark Stoops had plenty to say about all his players, calling his cornerbacks “freaky big”, which drew a chuckle from media in attendance.

“If you’re getting pushed around, then really you’ve got no chance. It’s definitely still at the line of scrimmage. I mean, the statistics prove it. I’ve told you guys this before, but if you outrush your opponent by one yard, it’s a high percentage of winning in conference games,” Stoops said.

Size is a huge plus for the team this year, and they made it a focus in their recruitment efforts as well, pulling in several line-of-scrimmage recruits who weigh over 300 pounds.

While the team is bigger in the trenches, they’re also more relaxed and in sync. Last season, the line sought to replace four-year letter winner Jon Toth, as well as handle the erratic season for Nick Haynes, both on and off the field. Bunchy Stallings’ struggled at center before Jackson moved up to stabilize the group, and it wasn’t until a blowout loss against Mississippi State when the line found the five players they’d be sticking with for the rest of the season.

“There’s so much communication going on with us, and last year we’d argue over some calls,” Jackson said. “Now, we almost don’t even have to talk to each other, we just know what’s going on.”

The increased stability has Jackson, and his teammates, thrilled about their run blocking and pass protection in the coming season.

Now that the line is of SEC size, they have the SEC-sized task ahead of them: winning enough games to be satisfied.