There’s no place like home: Kappa Kappa Gamma moves back into renovated house 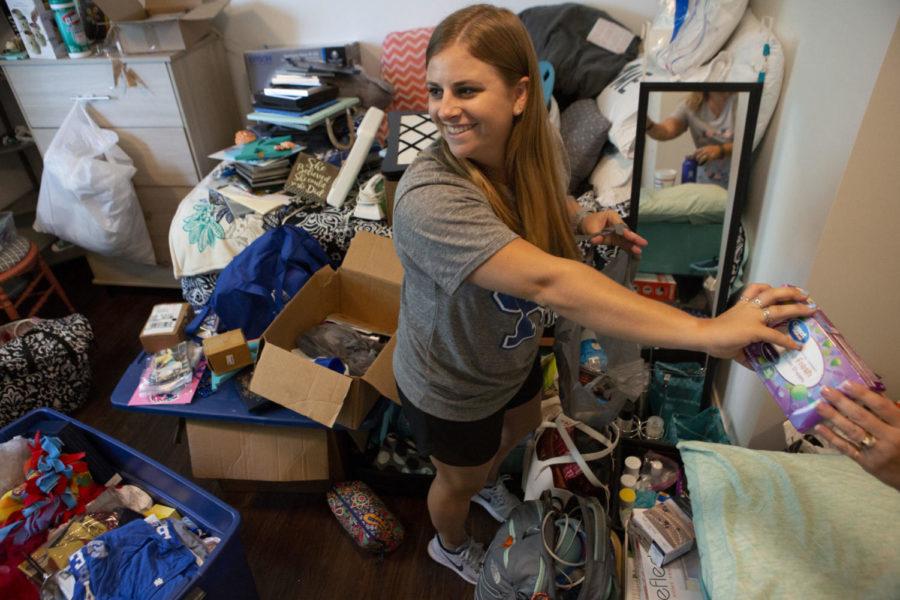 Kasey Considine, a senior ISC and business double major and Kappa member, unpacks her boxes and suitcases in her new room in the new Kappa Kappa Gamma house on Tuesday, Aug. 15, 2018 on UK’s campus in Lexington, Kentucky. Photo by Arden Barnes | Staff

After more than a year, the women of Kappa Kappa Gamma were able to move into their newly renovated house.

The Kappa house, located at 238 East Maxwell St., was a staple of the Kappa Chapter and had been for over 100 years, according to House Chairman Hannah B. Howard. It was home to 42 girls before the decision to expand was made.

“We were in need of larger meeting, study and living spaces to accommodate the over 250 women currently in our chapter,” Howard said. Howard, a senior political science and business major, lived in the original house before renovations began.

Two years of development and 14 months of construction later, and the Kappa house is a mansion compared to the original. Howard can now, as House Chairman, help up to 68 women move in as opposed to the former 42 capacity. The Chapter Room and dining room can accommodate up to 300 women. Howard also said there are new educational spaces, a larger house director suite and a professional kitchen. The Kappa House is now ADA compliant with an elevator and other facilities.

As to be expected, these new changes were much anticipated by the Kappa women.

“I’m sure I can say on behalf of all the members we are over the moon excited,” Howard said.

Howard said the house played a “pivotal role” in her chapter membership.

“I moved into the house at the beginning of the spring semester of my freshman year, with roommates I did not know well,” she said. “I left the house at the end of that semester with new friends, and a love for Kappa that I could never have imagined.”

She said her passion for the house, which gave her “a sense of home while away at school,” only grew from there. Now, she said she can’t wait for Kappa members to create new memories under the new roof.

The move is not only a thrilling moment for members returning to the house but for those new to the Kappa house as well.

Junior Spanish and psychology double major Lauren Zahrn is “so pumped” about getting the chance to live in the Kappa house. Many sorority women are able to move into the house during their sophomore year, but Zahrn couldn’t due to the construction. Now that she has the opportunity, she couldn’t be more excited.

“I am the Philanthropy Chairman and it will make my job easier,” Zahrn said about the decision to move from the apartment complex Kappas stayed in last year to the Kappa house. “Plus I get to grow closer with my sisters, especially my big sister who is my roommate.”

On Aug. 13 and 14, the Kappa women were able to move in and see their new home for the first time. The house was full of natural light and features from the old house, like the original staircase. Howard said many of the girls appreciate the sentimentality of preserving pieces of the old house. Zahrn described the new house as “everything I could’ve imagined and more.”

“The house may look a little different but our fundamentals have not changed,” Howard said. “We are fortunate to be able to say at Kappa that we have a family within family at UK.”

Howard said that Kappas are excited to be part of the growing Greek community at UK and can’t wait to see what the future brings.