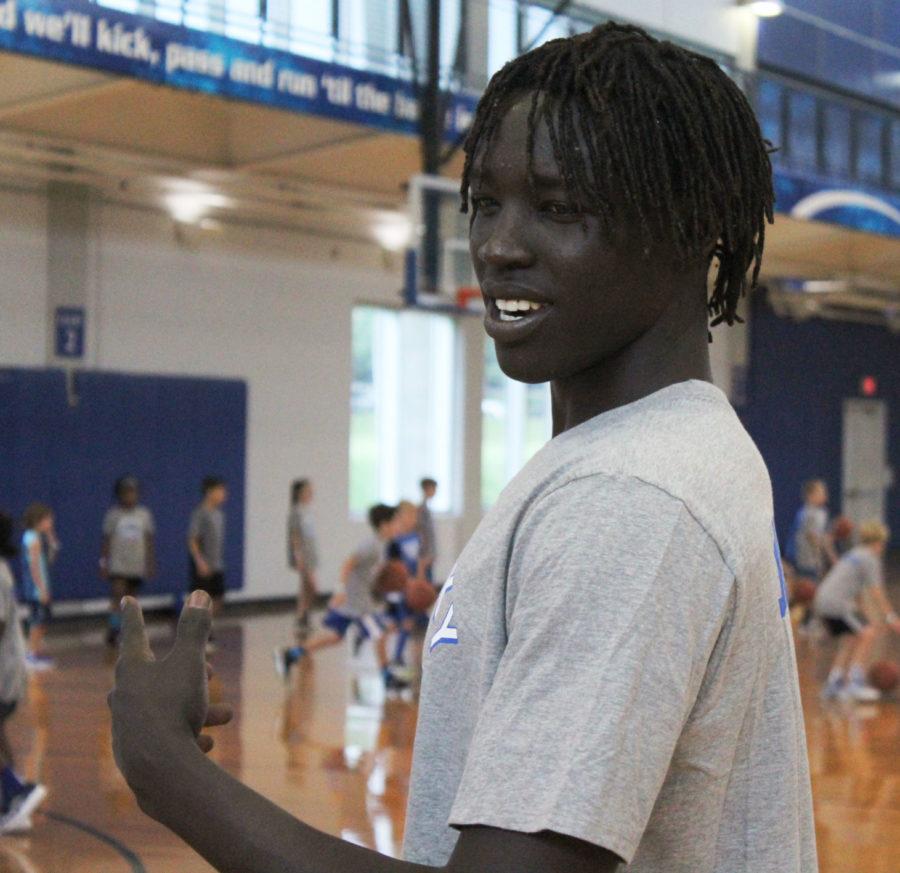 NBA player and former Cat Wenyen Gabriel of the Sacramento Kings laughs as campers at the annual Draft Day camp practice their dribbling at the Johnson Center on August 2nd, 2018.

When talented players or college standouts go to the NBA, one path usually sticks out in people’s minds. The player signs with an agent, goes to pre-draft workouts to show off their skills to a team, attends the NBA Draft Combine before getting drafted with one of the 60 picks, changing their life forever in a single moment.

For Wenyen Gabriel, this path was appealing, but not the way he found his way to professional basketball.

“It’s just proof that you can make it, there’s different ways to make it into the league, you saw [Isaiah Briscoe], he went overseas for a year, and now he came into the league,” Gabriel said. “It’s a long race going down, it’s not just one day you get drafted and you’re in the league forever.”

Gabriel signed a two-way contract with the Sacramento Kings, after a good Summer League tournament performance that saw him average 6.8 points and 5.6 rebounds over five games, while shooting 39% from the field.

A two-way contract is just that – it’s a contract with two professional basketball teams. In the NBA, that means a contract with an NBA team and its G League (formerly D League) affiliate. This allows the organization to move the player back and forth between the two teams as their level of play fluctuates. Players spend a majority of their time with the G League affiliate, and no more than 45 days with the upper level NBA team.

For Gabriel, this means he will share time between the Sacramento Kings with former teammate De’Aaron Fox, and the Stockton Kings, less than an hour drive (depending on California traffic, of course) down the I-5.

The two-way contract was introduced during the offseason before the 2017-18 season. The rule change expanded team rosters from 15 to 17 players per NBA team to allow for the two new contracts. A two-way can be for either one or two seasons.

“It’s not that everything is live or die by the draft,” Gabriel said. “You can still make it in your career going on forward, so the draft, the contract only lasts so many years.”

Gabriel isn’t the first undrafted player hoping to use the G League to leverage himself to a strong role in the NBA. Hassan Whiteside of the Miami Heat started out with the Iowa Energy before being called up to the Miami Heat, where he almost immediately led the NBA in blocks before leading it in rebounds.

Danny Green of the Toronto Raptors also earned a “call-up” from the Reno Bighorns to the San Antonio Spurs before winning a championship in 2014 alongside Kawhi Leonard and Tim Duncan.

Gabriel isn’t even the first Kentucky player to look for a permanent “call-up” from the G League. Former Cats to go through this process are Alex Poythress, Archie Goodwin, DeAndre Liggins and Daniel Orton.

As Gabriel continues to pursue his NBA dream, he’ll have the NBA rules to thank for an increased opportunity to play on the biggest stage while he does it.