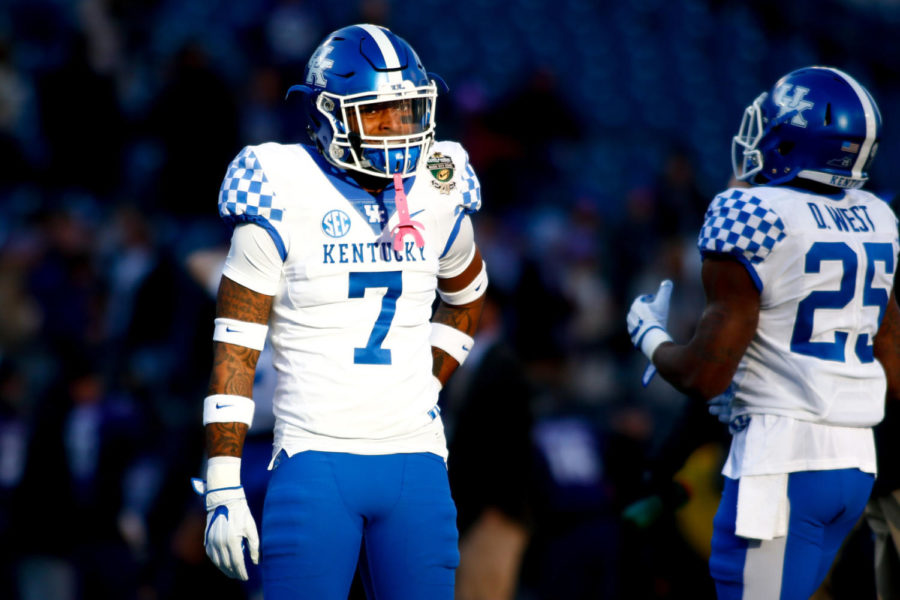 Kentucky Wildcats safety Mike Edwards warms up with the team prior to the Music City Bowl game against Northwestern on Friday, December 29, 2017 in Nashville, Tennessee. Kentucky was defeated 24-23. Photo by Arden Barnes | Staff

Six games through the 2017 season, UK defensive end Josh Allen looked like a surefire first-round NFL draft pick. He had recorded a sack in every game he played and had forced two fumbles. He continuously hurried opposing quarterbacks, and had racked up 35 tackles on the year, a large amount for a pass-rusher.

Unfortunately for Allen, the second half of his season was much less productive. He only recorded half a sack in six more games, hurried a quarterback only once and only completed six more solo tackles for the rest of the regular season. His first-round ability was questioned as he did battle with SEC offenses while Jordan Jones was injured, allowing offensive lines to focus on Allen.

Allen chose not to enter the 2018 NFL Draft and is looking to make this next year, his senior year, one that eliminates all doubt for his professional future. Instead of focusing entirely on his craft, though, he’s taking this year to make his teammates better along with him and senior plug-and-play safety Mike Edwards.

Edwards was in the same boat as Allen last year, except the timeline was reversed. Early in the season, he had on-and-off struggles with consistently being a defensive terror and imposing his will. In the latter half of the season, Edwards took off as the team’s leading tackler and finished well above his teammates in that department.

Instead of entering the draft, however, he chose to return to school with Allen and complete what is set up to be their best defensive year yet.

They’ve both taken on complete leadership roles, and since Joshua Paschal was diagnosed with malignant melanoma in his foot, their jobs as leaders have already started.

For Edwards, his leadership is his knowledge of positions. His ability to play every defensive back and either cornerback position lets young players learn from how he plays them. Head coach Mark Stoops calls Edwards “interchangeable,” but said he’ll primarily put Edwards in the nickel position. As Edwards rotates around positions based on the defensive needs for the Cats, younger players will have the opportunity to see UK’s leading tackler playing their position.

The record will show if their leadership tactics are effective.