They’re not in Kansas anymore: The journey from Kansas JUCOs to the Kentucky football team 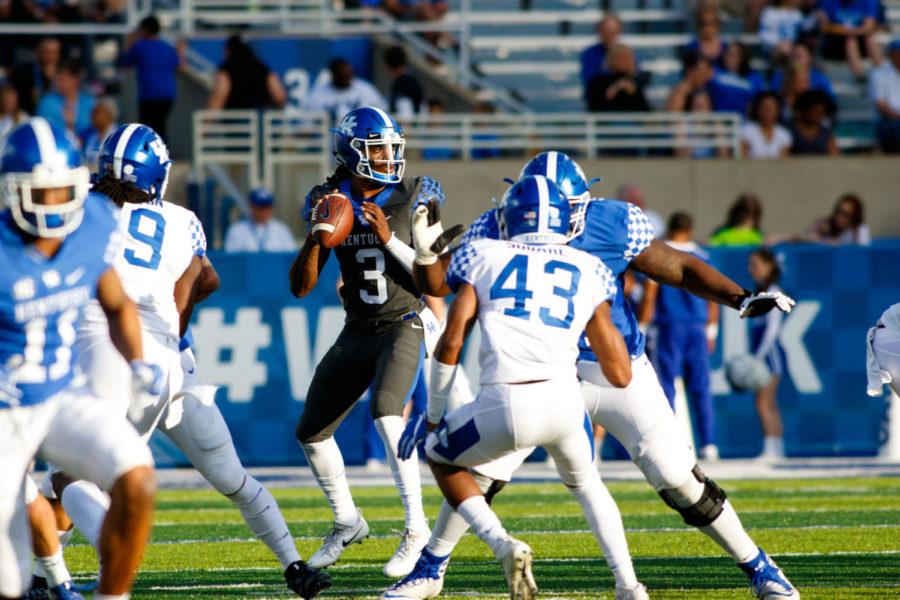 Not every player on Kentucky’s roster was a desired high school recruit that was destined for division one football at a young age; instead, some players took a longer road.

That alternate road that many players try to avoid is junior college, a place where football careers can be made or broken. Some of the NFL’s most talented players began their career in junior college, such as Aaron Rodgers, O.J. Simpson and Keyshawn Johnson, while other potential superstars never made it out.

Three Kentucky football players got to experience the challenges of junior college firsthand, and fortunately for them, they worked hard until their goal of playing at a division one school was achieved.

All had different experiences at their junior college, but in the end, they have said they are appreciative of the lessons they now use at UK.

Kentucky has had success the last two seasons in starting a junior college transfer quarterback, and newcomer Terry Wilson is hoping he can continue that going into this season.

Wilson’s stop in Lexington is his third during his college career. Wilson was originally an Oregon Duck before deciding to transfer to Garden City Community College in Garden City, Kansas.

Wilson spent only one year at a junior college, where he lit up the stat sheet to become FBS-relevant again. However, that one year was enough for Wilson.

“It’s a tough experience,” Wilson said at UK’s Media Day. “You can get down on yourself sometimes but you just got to keep pushing, you got to keep going, do it.”

One of the things that made being at Garden City tough was the practices, but it wasn’t the screaming coaches or early practices that made it tough; it was the odors surrounding the field.

“We were in the middle of nowhere, it smelled like cow poop, it was bad,” Wilson said. “Every practice, especially when that wind was blowing, you would get a whiff of it.”

Another thing that highlighted Wilson’s year at Garden City was his appearance on the popular Netflix show “Last Chance U.”

Wilson and the Broncbusters were the opponents of Independence Community College on episode three of the show, and Garden City would go on to lose the game in a close battle.

UK fans and teammates enjoyed watching one of their future players throw deep passes and juke out defenders in the episode, but Wilson never watched it himself and still gets made fun of by his teammates for the loss.

Between smelly practices and a loss that will never go away, Wilson is happy his junior college time is over, but happy of the lessons he learned in Kansas.

“I’ve learned a lot and once I’ve gotten here, I’ve been – things I’ve learned back then, I try to imply here,” Wilson said.

Wilson was not the only current Cat to attend Garden City Community College, as Lonnie Johnson Jr. spent two seasons playing for the Broncbusters and head coach Jeff Sims also.

Just like Wilson, Johnson Jr. also remembers the practices that smelled like cow poop, which made the tough days even tougher for the defensive back.

Johnson Jr.’s toughest year might have been in 2016, his sophomore season at Garden City, when he sat out the whole season to focus on academics. In 2015, Johnson Jr. showed major promised and earned a spot on the All-Kansas Jayhawk Community College Conference Second Team.

Not playing football in 2016 made it difficult for Johnson Jr. to stay focused on his goals, so one of the things he started doing was find the ‘quote of the day’ to inspire him to stay focused.

“It was something to just motivate you everyday to go class,” Johnson Jr. said. “That helped me get through it when I wasn’t playing.”

The quote of the day worked, as Johnson Jr. was able to raise his grades and earn a spot on Kentucky’s roster for the 2017 season. He no longer does the quote of the day at Kentucky, but he stills finds other ways to motivate himself in the classroom and on the field.

Similar to Wilson, Johnson Jr. is happy to be at UK and not in Kansas anymore, but he knows he would not be at UK if it weren’t for his experience at Garden City.

“Without that opportunity, I wouldn’t have the chance to be here where I’m at today,” Johnson said. “I just thank coach Jeff Sims for that.”

Not all of Kentucky’s junior college players came from Garden City, but they did all come from Kansas, where Phil Hoskins spent two years at Highland Community College.

Both Hoskins and Johnson Jr. registered four tackles in the game while Hoskins added three sacks in the losing effort.

Playing football was about all that Hoskins did during his two years at Highland, as the town has a population of about 1,000 people.

Hoskins’ version of fun included football, all day, every day.

“Sat in the dorms and played the game, we either played the game or we went to the little facility we had and did some extra working out just to pass the time by,” Hoskins said.

Because the town had few options for entertainment, Hoskins was able to improve himself constantly and remain focused on his goal, of playing at a division one school.

Sometimes, players who go to community colleges in an urbanized area get distracted and lose sight of their goals, which is why Hoskins would recommend a place like Highland for community college.

“If I were to recommend a junior college, I would say go to a more rural area like Mississippi or Kansas, somewhere like that,” Hoskins said. “There’s not too many distractions, more focus and work out there.”

Hoskins also believes that junior college is the right route for a lot of high school prospects. Sure, he is happy it is over with and to be at UK like his teammates, but Hoskins believes he is a completely different player than he was first out of high school, and he is unsure he could have handled the pressures of division one athletics as a freshman.

“The junior college experience, it matures you, it makes you grow up,” Hoskins said. “Being so far away from home, mom is not there, dad is not there, your family is not there, so you really have to be in tune with yourself and whatever your goal is, that’s what you have to work towards to get where you’re trying to be.”