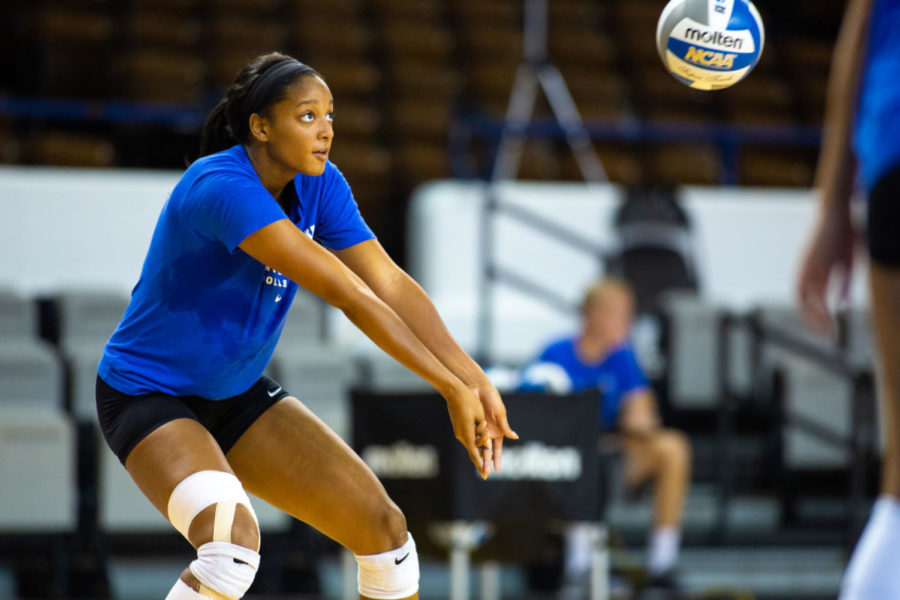 UK volleyball returned to Memorial Coliseum for the first game in nearly eight months Friday afternoon, as the No. 16 Wildcats hosted the College of Charleston Cougars in the second match of the Bluegrass Battle.

After a three-game stint in Los Angeles for the Trojan Invitational where the Cats lost each of their games, Kentucky was more than happy to be home.

“It’s a great feeling, especially after being so far away,” Leah Edmond told reporters. “Seeing my family, just knowing that I’m home just adds a whole level of confidence for me.”

Those feelings appeared to be echoed by the rest of the team, as Kentucky picked up its first win of the season by defeating Charleston 3-1.

The Cats came out firing, opening up a lead by scoring six of the game’s first eight points. But the Cougars would close the gap, making it 20-19 late in the first set. Sophomore Avery Skinner had a massive kill for the next point and Kentucky would claim four of the next five to take set one 25-20.

The second set was a back-and-forth affair throughout, with neither team wanting to give ground. Seemingly every other point knotted the score up, and you could feel the fans anxiously waiting for one side to make a big run.

That run never came, but the Cougars eventually scored back-to-back points to take the set 27-25.

Set three followed the same script as the first, with the Cats getting a big lead and watching Charleston slowly close in. Edmond would get the kill for a 25-21 set win, putting Kentucky up 2-1 in the game.

Edmond finished the match with a whopping 25 kills, one shy of her career high. Despite the impressive individual effort, she deflected praise onto others, specifically Madison Lilley.

“I have to give kudos to my teammates, and my setter, she’s unbelievable,” Edmond said after the match, in which Lilley had a season-high 57 assists.

The momentum garnered from the third set allowed the Wildcats to race out of the gate in set four and not look back. Charleston tried to make one last run, but ultimately fell short. The 25-19 set victory clinched Kentucky’s first win of the year and knocked Charleston from the ranks of the undefeated.

With the loss, the Cougars record stands at 3-1 on the season. Kentucky improved their record to 1-3.

Kansas and Dayton– the other two teams in the Bluegrass Battle– played the opening game, with the Jayhawks dealing the Flyers their first loss of the year 3-2.

All four teams return to the court Friday evening. College of Charleston takes on 2-1 Kansas at 6:30 ET, while the Cats match up with 3-1 Dayton approximately a half-hour after the conclusion of the Cougars/Jayhawks game. All of Kentucky’s matches can be seen on SEC Network+ and the WatchESPN app.