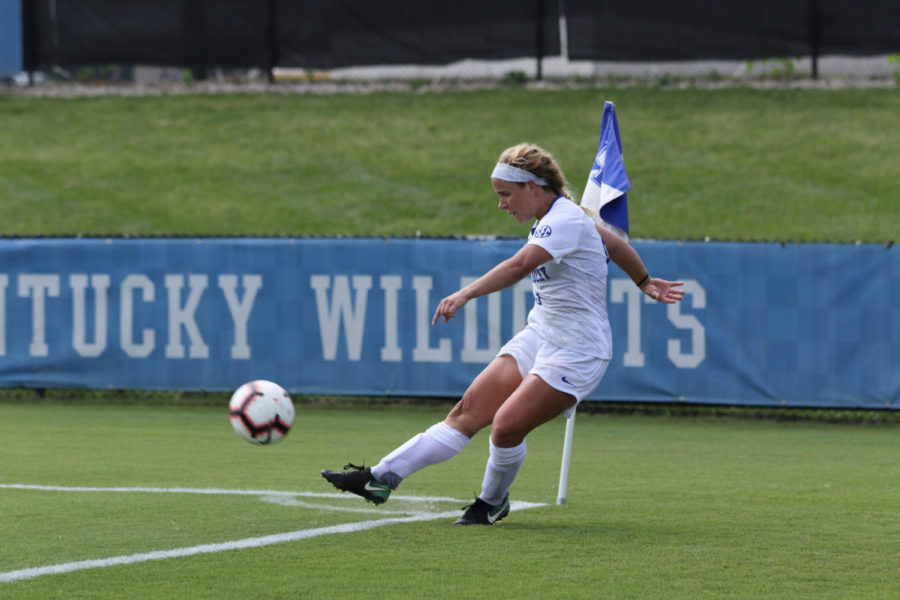 Redshirt Sophomore Marissa Bosco (9) crossing the ball in from a corner kick. University of Kentucky women's soccer received their first loss of the season against University of Wisconsin on Sunday, August 26th, 2018. Photo by Michael Clubb | Staff

UK women’s soccer traveled to Bloomington, Indiana, on Friday for an early evening showdown with the Hoosiers. After the three Hoosier goals that came in the first half, UK couldn’t overcome the deficit, falling to Indiana for the first time since 2000, 5-1.

This was the first time IU and UK had met since 2010 and the all-time series had been tied at 4-4-1 prior to this evening’s game.

The Hoosiers jumped on the Cats relatively early. Senior defender Caroline Dreher scored the first Indiana goal of the match in the 17th minute, her first goal of the season.

Just 10 minutes after the first score, senior forward Abby Allen scored her fifth goal of the season off an assist from junior midfielder, Chandra Davidson, making the score 2-0.

With five minutes left in the first half the Hoosier’s struck for the third time, entering halftime with a strong 3-0 lead.

The Cats, however, wouldn’t stay scoreless for long.

Jimenez’s goal and UK’s defense wouldn’t be enough to lift the Cats over the threshold that the Hoosier’s controlled for the entirety of the game. Two more goals came for the Hoosier’s in the 54th minute and in the 79th minute.

Next up for the Cats is trip back home to the Bell Soccer Complex for a Sunday afternoon match against Furman University at 2 p.m., where UK will be looking to snap the four-game losing streak.