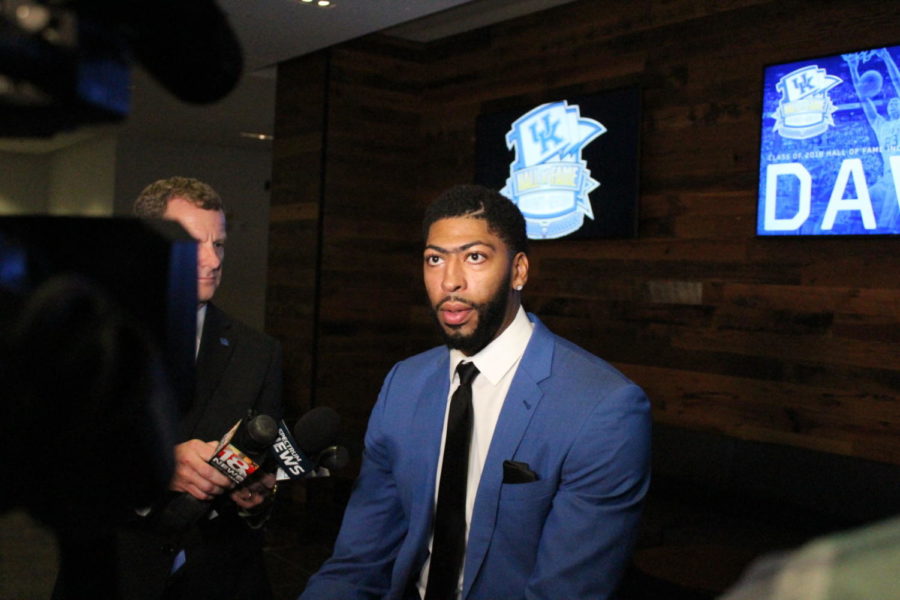 Anthony Davis answers questions at his induction to the University of Kentucky's Hall Of Fame. The event took place on Sept. 21, 2018 in Kroger Field's Woodford Reserve Room.

Here’s what each inductee talked about in their final interview before taking their rightful place in Wildcat lore:

One of the most dominant defensive players Kentucky fans have ever seen grace the hardwood of Rupp Arena, Davis set the UK record for blocks with 186 in his only season with the blue and white. That total, good for fourth all-time in the NCAA, and his double-double average helped the Cats to a 38-2 record and the eighth NCAA Men’s Basketball Championship for the school.

“It’s such an honor,” the 2012 NBA number one draft pick replied when asked about his induction. “Being here for a short period of time… it’s something I never thought would be possible.”

“This is where it all started for me, anytime I get a chance to I try to make sure that I come back and show support,” he added. “For me, it was a fun time. Time for us to grow up, time to play the game we love with no business side of it, and just have fun with each other and enjoy college.”

The former first-team All-American played four years in a Wildcat uniform, leading the team to an Elite Eight appearance in her junior season. She ranks in the top ten of many UK women’s basketball statistical categories, including second in both rebounding in blocks.

“I went into school here just wanting to play hard and do what I could to help the program,” the three-year All-SEC selection told reporters. ‘“People just said I did a lot of great things… they were like “oh you should be in the Hall of Fame… I’m blessed and honored.”

The two-time SEC Player of the Year now coaches high school basketball in Cincinnati, Ohio while trying to keep up with the program she left such a major imprint on.

Emery was the head man for the Kentucky men’s tennis team for thirty years, not allowing the team to lose a single match to an in-state opponent in that time. Including his time at Austin Peay, he had 655 victories as a head coach.

“I’ve worked basically my whole professional life at the University of Kentucky,” the three-time SEC Coach of the Year said. “That’s what makes this really special for me… this is the highlight of my career.”

Emery still lives in Lexington and works in the UK athletics department. He coached 19 players to All-America honors and three players to the NCAA singles championship finals, including the next inductee…

His 172 victories are the most in school history, and he is tied for the most singles wins in NCAA history. The ITA/Rafael Osuna Sportsmanship Award winner gave insight on what it’s like to be inducted with a man who played such an integral part in his career.

“[With] everything we’ve been through, after coaching me even after my time here… being there for all of my moments… it’s really cool that I’m in the same time as him.”

Quigley stopped playing professionally a little over a year ago, and recently celebrated his first wedding anniversary.

Tamme racked up 133 receptions for 1,417 yards and 11 touchdowns in his collegiate career, with his yardage mark standing as the record for a UK tight end. The two-time consensus All-SEC first-teamer admitted that this accomplishment stacks up with the best he has ever received.

“This probably means as much to me or more than any accolade I’ve ever been given… this is really, really special to get thought of in such a way by UK and this community… it means a whole lot to me for sure.”

The nine-year NFL veteran couldn’t escape without being asked for his prediction on the big game tomorrow:

Each of Tamme’s teams appeared in the Super Bowl with him on the roster, but none of them could muster a win.

Cochran was first-team All-SEC his senior season in 1978, when he would finish as the SEC runner-up. He led Kentucky to three consecutive top-five finishes at the SEC Championships to end his collegiate career, and the first outright tournament victory in program history. He has been playing golf professionally since 1979 and has tallied ten professional wins in that time. Cochran was not in attendance of the media portion of the induction ceremony.

Each of the new Hall of Fame members will be recognized and celebrated during halftime of the Mississippi State-Kentucky football game Saturday night at Kroger Field. Kickoff is set for 7 p.m.