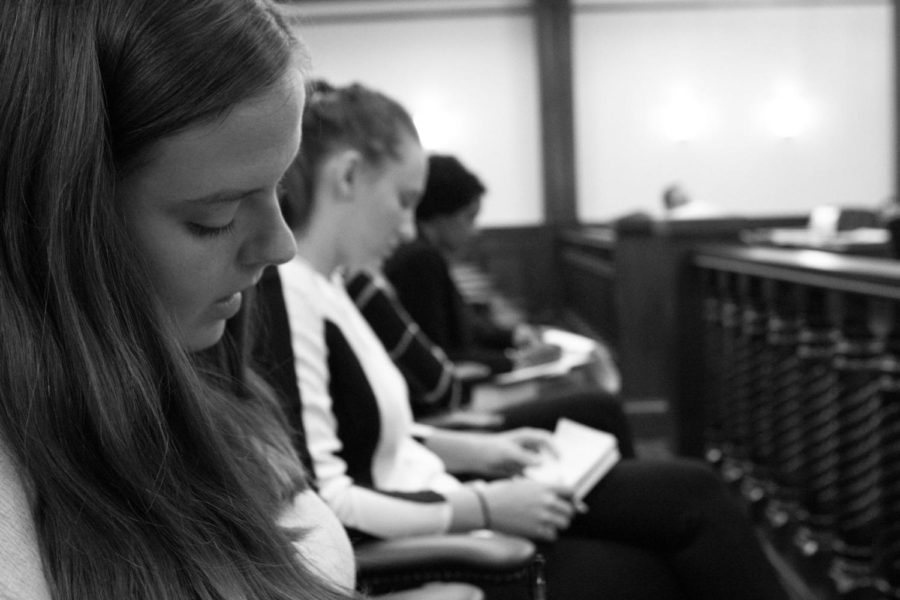 Several UK students requested excused absences from their classes and carpooled to Frankfort to listen to oral arguments in the Court of Appeals, the latest episode in UK’s lawsuit against the Kentucky Kernel, on Tuesday.

The appellate side of the courtroom was packed, but one significant person was missing from the appellee side: UK President Eli Capilouto.

Capilouto, the man who in 2016 accused Marjorie Kirk, the Kernel’s former editor-in-chief who was on staff when the lawsuit began, of printing the story of the UK professor who sexually abused his students merely to get readership growth.

The man who refused to apologize to her even after a group of journalism faculty drafted a letter informing him that his insult to Kirk was uncalled for and suggested unethical behavior from their tutee.

The man, who in a January 24, 2017, campus-wide email entitled “Ruling in the Kentucky Kernel Case,” refused to even mention the Kernel by name in the body of the email and instead triumphed over winning the “case.” He referred vaguely to the ruling and celebrated what he said was a “a victory for victim survivors and their rights and their privacy.” In this email, he did not update UK students on the cause of the lawsuit or any of the relevant details. He did not recognize in his address that the audience he was writing to included the people his administration sued.

This “case” and “ruling” he referred to in the email was when Fayette County Circuit Court Judge Thomas Clark ruled in favor of UK in the initial lawsuit, before the appeal process began. By refusing to respect and acknowledge Kernel personnel in these examples, Capilouto showed a disregard for students who make waves.

UK spokesperson Jay Blanton said that it’s “not unusual” for Capilouto not to attend a hearing for litigation involving the university. However, to those of us who made the trip to hear the oral arguments, Capilouto proved once again that he only values the students who do not challenge him and his administration.

You didn’t face us— the students you are suing— in the courtroom today, President Capilouto. Here’s what you missed.

UK’s attorney, Josh Salsburey, referred repeatedly to “the Kernel” as an inanimate object. For example, he said, “We believe the Kernel knows who at least one of the victims are…” and “If [victims] choose to disclose something to the Kernel, that’s one thing but the university doesn’t have the luxury of deciding for the students what’s to be disclosed.”

We’re not inanimate objects. We represent “the Kernel,” but there are people involved. We’re students and we’re human beings. The Kernel is not a mindless printing press that runs itself and seeks to defy UK. We are a group of young people who believe that we can make a difference, set a necessary precedent for future democracy and protect the students rather than the predators.

Part of UK’s defense was based on skepticism that Kernel personnel could report in a professional way on the sexual misconduct of former UK professor James Harwood. This challenges our professionalism and ethical morals as journalists and students. In a way, you question the validity of your own administration by challenging our ethics: Your faculty trained us.

But to humor you, we would like to remind you that the only entity that has ever leaked identifiable information about Harwood’s victims was not the Kernel; it was UK personnel.

In a Sept. 9, 2016, Board of Trustees meeting at UK, letters from the victims were presented to the board. One of the letters was not properly redacted, the Kernel reported, and it revealed the name of one of the victims. The letters were collected after the insufficient redaction was revealed, but the damage was done. Board members saw one of the names thanks to UK’s carelessness. On the other hand, the Kernel has been nothing but discreet in its handling of this case.

Miller was referring to seven of the Kernel staffers he knew were in the courtroom. Many more students work for the Kernel. Many more students believe in protecting victims of abuse by challenging the predators who universities let go untarnished. Those other staffers could not get out of class to come to court today. They were taking exams and doing “student things.” What were you doing, President Capilouto?

We are not just “The Kernel”; we are more than the words you read in our weekly printed paper that tell of the latest campus news. We go to class. We laugh. We complain when our backpacks are too heavy. We eat Twizzlers. We are a group of young people who believe in free press. But we’re also ordinary students who live off coffee and count down the days until Christmas break.

Bailey Vandiver is our editor-in-chief. She likes typewriters and “The Princess Bride” and the color yellow. Our managing editor McKenna Horsley likes video games and writing and her favorite denim skirt. Hannah Woosley is our assistant opinions editor. She loves yoga and writing and politics. Rick Childress, our news editor, is a native Lexingtonian, but his mother is from the Philippines. He likes to go back and visit. Arden Barnes, our art director, loves music and the way the setting sun throws photogenic light rays on the concrete while she walks home from school. Sarah Ladd, our opinions editor, likes to cook and hike and travel. Jacob Eads, our assistant news editor, likes golf and tennis. Sydney Momeyer, another assistant news editor, works at a local restaurant between her time at the Kernel and her classes, and she has a fantastic sense of humor.

And that’s just a few of the people on our staff.

We’re students. Ordinary students who believe in the free press and keeping powerful figures in check. We will continue in this fight with the assurance that even college students can change things for the better. We know we are in the right, and we rest our case.