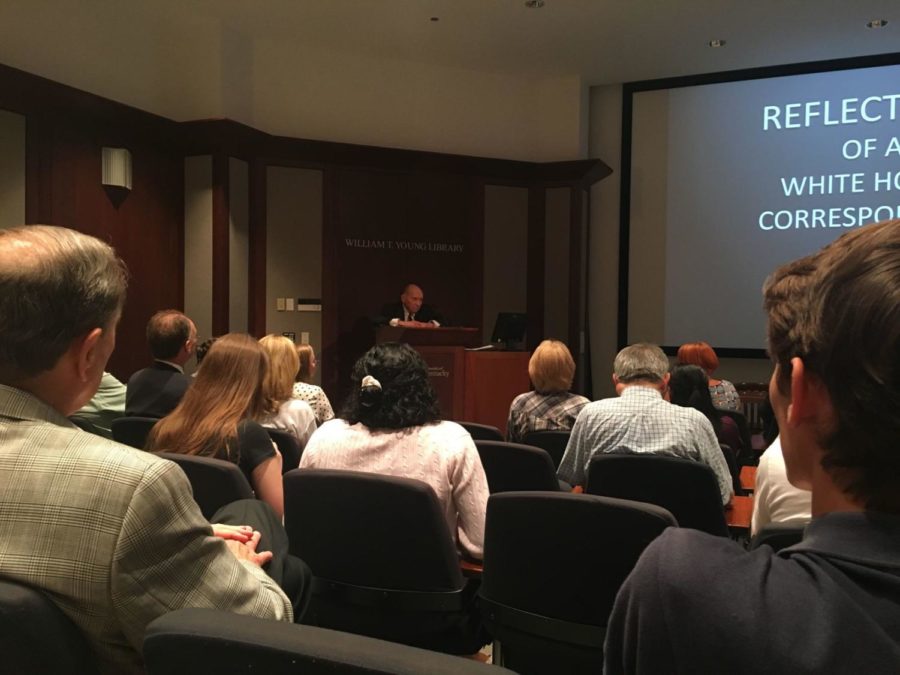 “I looked at her two-piece suit; there was pieces of flesh and skull on her suit…there was blood on both wrists. Her stockings saturated with blood.”

This shocking scene describing Jackie Kennedy on board Air Force One for the inauguration of Lyndon B. Johnson following the assassination of her husband was just one of the many anecdotes that Sid Davis, a former White House correspondent who covered the Kennedy assassination and LBJ’s presidency throughout the Vietnam War, told the people packed into the UK Athletics Auditorium in the William T. Young Library on Tuesday.

Davis, whose career spanned nine presidents and about 40 years, choked up several times throughout the night as he shared that he was 80 feet behind the presidential motorcade when Kennedy was shot, being on the plane as Johnson was sworn into office and reporting to a grieving nation on the loss of a president. He said he wouldn’t wish such a tragic story on anyone, but the memories of the “tyranny” stay with him.

Davis shared humorous tidbits with his audience as well, such as Kennedy’s pronunciation of Cuba as “Cuber”, sharing fresh figs with LBJ, LBJ carrying a pocket knife and Eisenhower’s refusal to read his press briefing notes before press conferences. Such detailed behind-the scenes information fascinated Jansen Hammock, a freshmen political science student at UK, who attended the lecture and said it was “absolutely amazing” and “unique.”

“Anytime you can hear someone document a story in this way, especially the first-hand experience of it, is completely unique and I’m glad the university is doing this,” said Hammock. “What Sid Davis kinda brought to us was this unique perspective on actually seeing these accounts first hand. I think it inspires us to kinda feel that we are bigger than just ourselves.”

He said that hearing and seeing the moments that Davis shared about was a “larger than life thing.”

“Hopefully everybody that came here tonight is gonna come away from this like I did, from the perspective of documenting these things is so important to our history and also to our longevity and how we go forward from here,” Hammock said. “I think it’s just really important for all of us to remember.”

Davis said after his lecture that journalism students can prepare themselves to handle traumatic reporting by being sensitive and refusing to report without all the facts.

“Journalism is just being careful, using common sense,” he said.