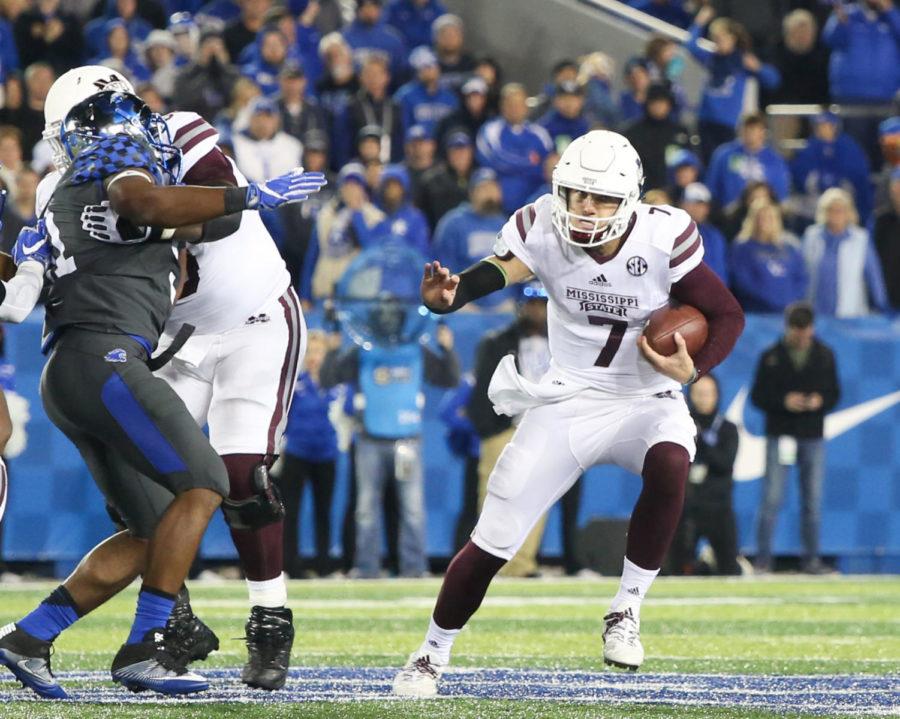 In Kentucky’s five games against Mississippi State with Mark Stoops as the head coach, Kentucky has gone 1-4 in those games, mostly thanks to the Bulldogs’ dynamic offense and smothering defense.

As Stoops scouts the Bulldogs and creates a game plan, he sees a lot of similarities in this year’s Mississippi State team compared to previous teams, even with a new head coach at the helm.

“There are some things that carry over and then you see his [Joe Moorhead] wrinkle, his nuances with the offense and what he’s doing,” Stoops said. “They’re still very very good and still very physical.”

“They have I want to say three seniors on their front, who’s very big and athletic, and one junior,” Stoops said. “Then across the rest of their defense a bunch of juniors, seniors, they sprinkle in a couple of sophomores but they’re an experienced group and a big physical group, very active.”

As for the offense, the Bulldogs are led by dual-threat quarterback Nick Fitzgerald, who has shredded the Cats in previous games.

Fitzgerald leads an offense that has scored over 56 points in two of its three games, and ranks seventh nationally in terms of yards per game.

“You put together a physical offensive line, a dynamic back and a big beast at quarterback, that’s a lot of good things,” Stoops said. “Their tight ends, they’re big, they’re strong and they’re explosive. They put a lot of pressure on you.”

Fitzgerald dislocated his ankle near the end of last season, but he still has accounted for eight touchdowns in two games, four of which were done with his legs.

Stoops said what makes Fitzgerald so difficult to plan for is his ability to gain positive yardage on a play that seemingly has fallen apart. Kentucky’s quarterback Terry Wilson has shown the ability to do the same thing, which has helped the Cats’ defense in practice.

“You have to be disciplined in your rush lanes, therefore you just can’t be just running up the field all the time because they can pull it down, it can be a draw, designed quarterback draw or they just can just pull it down when they see a gap and you saw that with Terry this last week,” Stoops said. “That’s what makes it difficult for defensive coordinators at times to stop because they can have everything matched up very good, and a guy just pulls it down and runs for 54 yards or whatever it was for a touchdown.”

Even with as big of a challenge Mississippi State will be, Stoops is excited for the opportunity to play in front of the home crowd in a big game.

“We’re going to have to do the same thing this week, we’re going to kick it up a notch in a big game with Mississippi State,” Stoops said. “We’re excited and guys are ready to get to work on that.”