Kentucky football looks to break streak in game against Florida 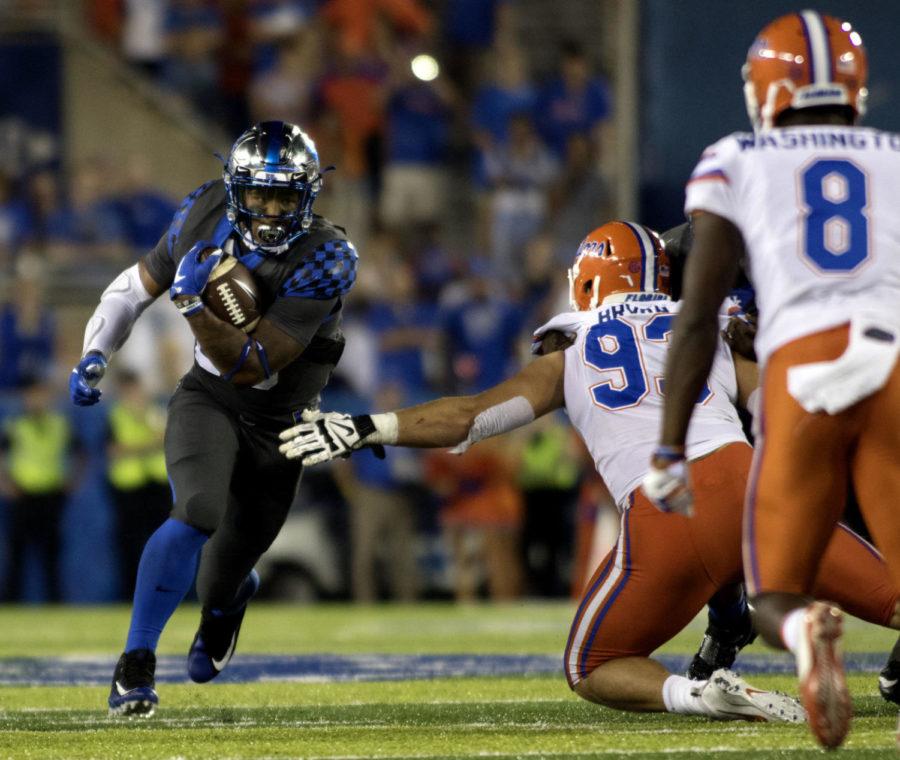 Kentucky running back Benny Snell Jr. dodges a tackler during the game against the Florida Gators on Saturday, September 23, 2017 in Lexington, Ky. Kentucky was defeated 28-27. Photo by Carter Gossett | Staff

The Kentucky Wildcats (1-0) will visit the Ben Hill Griffin Stadium in Gainesville, Florida, to face off against the No. 25 ranked Florida Gators (1-0) for the second game of their season.

To give some perspective, Top Gun was the highest grossing movie the last time the Wildcats won facing the Gators in 1986. The Wildcats won 10-3, and the Gators have been on a 31-game win streak since then— becoming the third longest losing streak to one opponent in FBS history. Only three uninterrupted series have had longer streaks than Florida’s over Kentucky. Notre Dame’s 43 in a row against Navy (1964-2006), Nebraska’s 36 straight against Kansas (1969-2004), and Oklahoma’s 32 straight against Kansas State (1937-68).

The Wildcats had a chance to snap the 30-year win streak last season as they held a 10-point lead over the Gators at the end of the third quarter; however, the Gators made a comeback, leaving the Wildcats with 43 seconds and a one-point deficit.

The game ended with a holding call moving the Wildcats back, and the kicker Austin McGinnis missing a 57-yard field goal that would have won the game.

The since-graduated quarterback Stephen Johnson threw for three touchdowns against the Gators’ defense; however, Benny Snell was held to 60 yards.

The last time UK and Florida played in Gainesville, the Gators blew out the Wildcats, defeating them 45-7. The Wildcats at that time were 0-2, while the Gators were 2-0.

Quarterback Luke Del Rio in 2016 threw for four touchdowns against the Wildcats defense, with running back Lamical Perine adding 105 yards on the ground.

The Gators, led by sophomore quarterback Feleipe Franks, threw for 219 yards and five touchdowns in his first game of the season against Charleston Southern, while freshman running back Dameon Pierce racked up 78 yards on nine carries, averaging almost nine yards a carry.

The Wildcats defeated the Central Michigan Chippewas 35-20 in their season opener led by their two-headed backfield. Junior running back Benny Snell rushed for 125 yards and two touchdowns on the ground. Sophomore running back Asim Rose added another 100 yards and two more touchdowns. Florida allowed more than 200 yards rushing to Charleston Southern, including a 70-yard gain.

Starter Terry Wilson threw for 78 yards but had two interceptions and a fumble before leaving the game with a bruised shoulder. Gunnar Hoak came in for Wilson went four for nine, throwing for a touchdown.

ESPN’s Football Power Index gives the Gators an 87.1 percent chance to win. The line on the game is Florida by 13.5. The game will be broadcast at 7:30 p.m. ET on SEC Network.