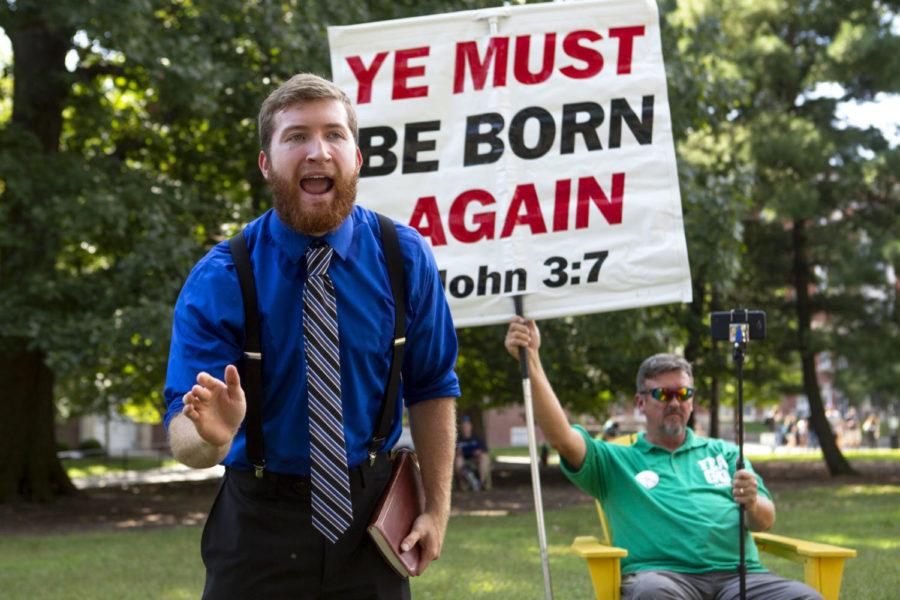 Once again, the Whitehall Classroom Building courtyard becomes the grounds for religious protest.

On Tuesday, campus preacher Zachary Humphrey returned to UK to share his organization’s views on Christianity. It is not the first time Humphrey has come to UK or other campuses to share the views.

Humphrey told the Kernel in February, the last time he was at UK, that he was with an organization known as Public Proclaimer Ministries. His website said he is  called to “open air evangelism.”

Students gathered in the courtyard outside Whitehall to interact and argue with Humphrey and his interpretations of the religion. Students shouted while asking questions about his views, while Humphrey claimed to be helping those within earshot, to save them from “eternal damnation.”

“I’ve come back for the second year in a row to beg you to change,” Humphrey said to the crowd. “That’s love.”

Surrounding students disagreed with Humphrey’s idea that he is showing them love, claiming that he is discriminatory and judgmental.

One freshman, Zachary Spangler, became passionate in his rebuttal against Humphrey’s ideas, and climbed atop the hill that Humphrey was standing on to debate his claims.

“I feel like there was a line,” Spangler said. “A separation between us and [the preachers]. I believe that we are all equal under God.”

Spangler said he climbed on the hill because he doesn’t feel any person should be talking down to another.

“There is no reason why they should be up on the hill and we should be beneath them while they talk down to us,” Spangler said.

While on the hill, Spangler engaged in conversation with the second preacher, referred to only as John, as Humphrey continued in his interactions with the crowd.

“He told me to look up a Bible verse,” Spangler said. “It was James 2:10 or 12. So I said ‘If you have committed one sin, you have committed all.’ At first he was saying that wasn’t true, but when I read that, he just ignored me.”

When asked if he is a Christian, Spangler noted that he is “trying to be.”

“I didn’t pose any type of threat,” Spangler said. “I was just doing what I thought was right.”