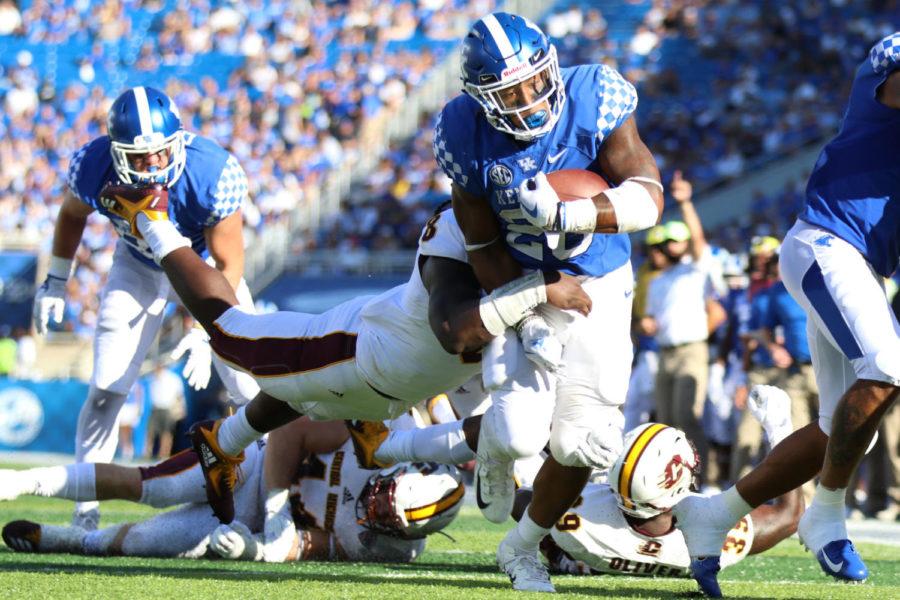 Benny Snell breaks a tackle and scores a touchdown during the game against Central Michigan on Saturday, September 1, 2018 in Lexington, Ky. Photo by Chase Phillips | Staff

UK is coming off a 2-0 start, including a win 31 years in the making, and Murray State is struggling at 0-2. The Wildcats are the heavy favorite in this weekend’s game at Kroger Field, and that’s before taking into consideration that Murray State has lost its last eight FBS meetings.

The Murray State football team has had a rough year so far. The Racers started off their season with a 49-10 blowout loss to the Southern Illinois Salukis at home. University of Buffalo transfer quarterback Drew Anderson threw two interceptions to pair with the Racers’ four fumbles.

Week two didn’t see much improvement for the Racers. The team traveled to Central Arkansas for a 26-13 loss. The Murray State defense struggled in the air, giving up more than 300 yards. However, Drew Anderson looked more comfortable, passing for 209 yards for Murray State.

Offensively, the Racers are in for a hard matchup with UK, due to size and athleticism.

Defensive end Josh Allen and linebacker Kash Daniel are coming off good weeks and will be the toughest battle the Racers have faced so far this season.

On the defensive end, Benny Snell is going to be a nightmare for the Racers. After losing two of their best rush defenders (Zachary Wade and Dylan Boone) to a suspension related to performance enhancing drugs last year, a talent like Snell is the last thing the Racers want to see. Marquez Sanford and Kenny Wooten make up a solid pair of defensive ends, but the defense is still giving up more than 200 yards per game.

The Racers have lost six of their last seven games, with their last win coming at home against Tennessee Tech on Nov. 11, 2017. ESPN gives the Cats a 99.3 percent chance to protect their home field.