Murray State ‘mascot’ at Kentucky football game has been unmasked 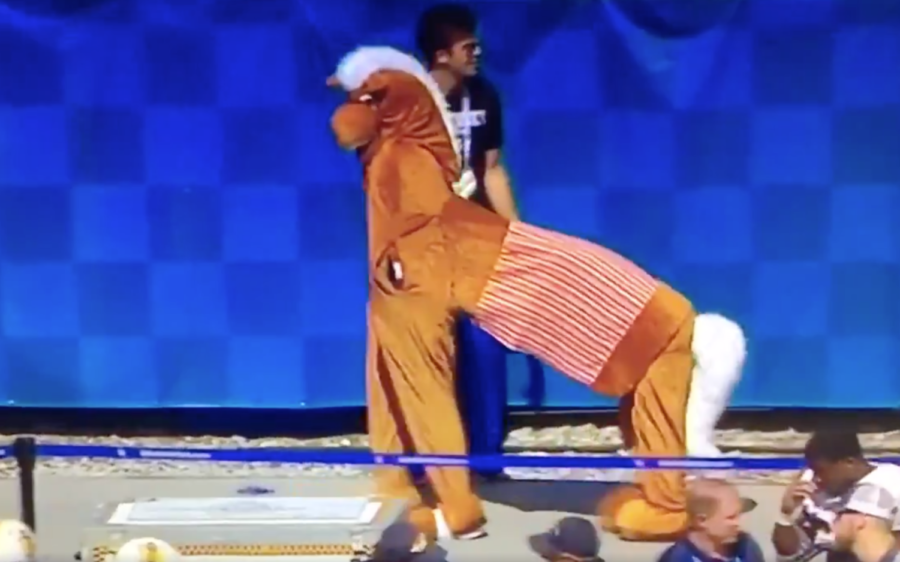 Two members of the UK Cheerleading team dressed up as Murray State's mascot during the game on Saturday, Sept. 15, 2018, in Lexington, Kentucky.

On Saturday, Sept. 15, UK football beat Murray State 48-10. The game not only featured a great win for UK, but also an apparent new mascot for Murray State. Caught running around the field was a horse mascot that Murray State refused to claim.

A video of the horse first surfaced in a tweet from Scott Charlton (@Scott_Charlton). He captioned the video “Murray St’s mascot. In 2018. For real.”

Murray State Sports’ page then replied to the tweet, making clear the mascot was not their doing.

Fans then took to Twitter to make jokes about the poorly made horse, with one fan comparing it to an episode of Scooby-Doo.

While some thought it was funny, Murray State alumni and fans were in disbelief that this could be a real Murray State mascot.

However, the mystery of where this outlandish horse mascot came from has been solved, and no, it is not Shaggy and Scooby.

“Our mascots, who are part of our cheerleading program, had the idea to dress up as what was supposed to be a plainly fake horse mascot for our game vs. Murray State,” UK Athletics’ Director of Strategic Communications Guy Ramsey said. “They came up with the concept and executed it on their own, all in good-natured effort to have fun and engage our fans.”

Was this the start of UK Athletics’ newest tradition? Perhaps.