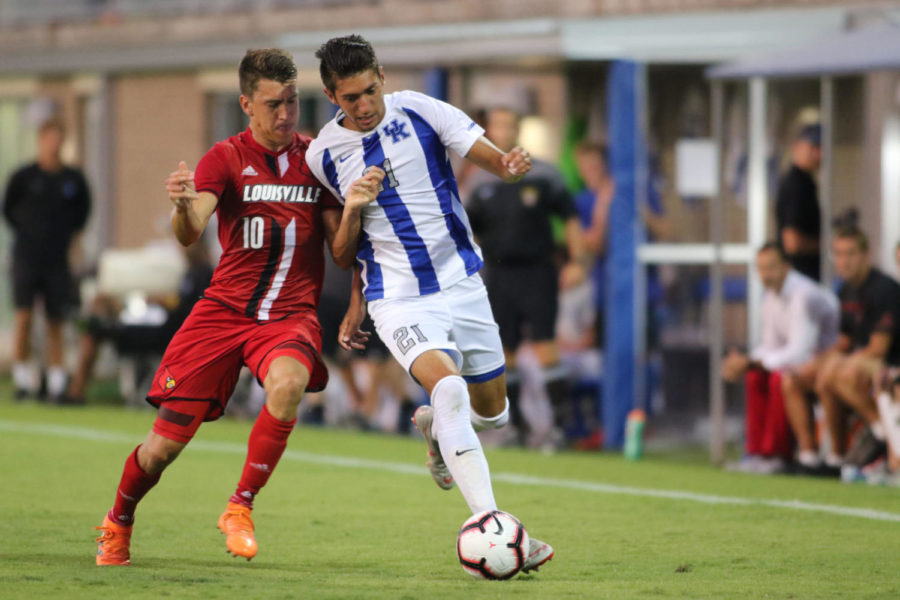 Williams scored in the 45th and 65th minutes, respectively. He continues to lead the team in goals with seven. Elmedkhar scored his third goal of the season in the 77th minute. The duo helped each other out: Elmedkhar assisted Williams’ goals for his first two assists this season, while Williams assisted Elmedkhar’s goal.

Seconds into the second half, Elmedkhar took the ball from ETSU at midfield. He progressed into ETSU’s middle-outer box, and Williams soon got the ball on a quick switch from Elmedkhar. He curled the ball into the upper-left corner of the goal past Buccaneers’ goalkeeper Josh Perryman.

“I’ve gotten those kinds of balls in the same exact position before, but we looked over a lot of film this week,” Elmedkhar said. “We focused on driving through defenders and to keep going until they gave us something.”

That goal wasn’t enough for UK. Twenty minutes later, after Elmedkhar kicked a corner kick from the left, Williams received it and flicked it in from ETSU’s inner box.

“This year whenever we [Williams and Elmedkhar] got more playing time, that’s when the chemistry clicked,” Williams said. “The scary part is we haven’t hit full potential yet.”

Elmedkhar further showcased his skills 10 minutes later. Williams got a touch and swung the ball over to Elmedkhar, who shot the ball from the central-outer box and scored with ease.

“Kalil is a points player. Us coaches have asked him to be a little more direct, and that coaching came out today, especially in the second half,” UK head coach Johan Cedergren said.

UK had only five shots in the first half. However, the Cats doubled that production in the second half with 10 shots. UK outshot ETSU in the game, 15-8. The Cats’ offense has had 10 or more shots in seven of its eight games this season. Williams carried a heavy workload with six shots.

The back four of Leon Jones, Aimé Mabika, Tanner Hummel and Cole Guindon helped limit ETSU to three shots on goal. The Cats’ keeper Enrique Facusse’s seventh clean sheet in eight games this season added to that defensive effort. Facusse, the reigning C-USA Golden Glove Award Winner, had three saves– two in the second half– and has 14 clean sheets in 25 career starts.

ETSU drops to 4-5-0 after winning four out of its five last games coming into Lexington.

UK will hit the road to take on conference rival South Carolina this Saturday, Sept. 29 at 7 p.m.