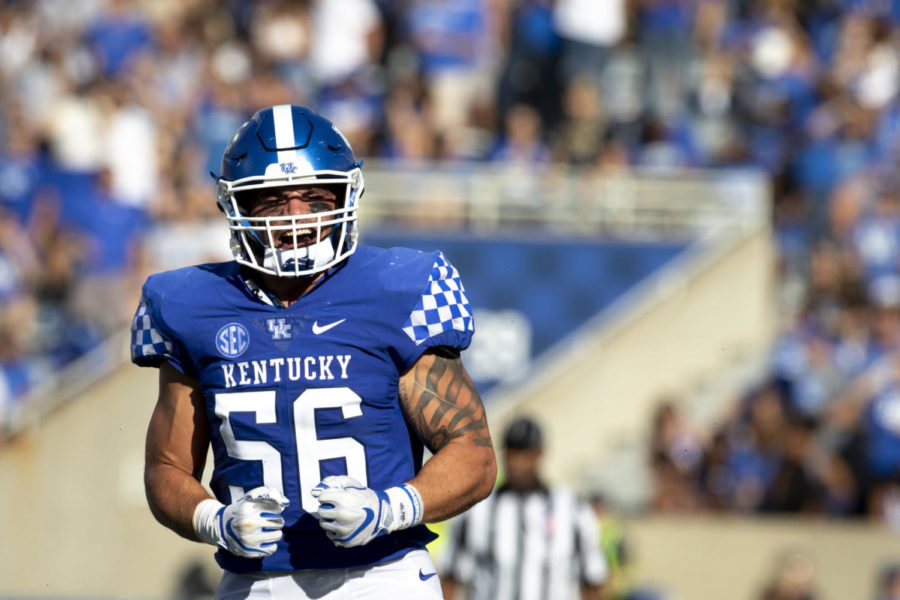 In the midst of preparations for their trip to Gainesville this weekend, the defensive side of the Kentucky football team met with the media Wednesday to discuss their upcoming SEC rival game and a few matters concerning their season opener against Central Michigan.

The Gators’ sophomore quarterback Feleipe Franks was an asset to Florida last weekend in their season opener against Charleston Southern, as he completed 66.7 percent of his passes for 219 yards and five touchdowns.

“He’s got a strong arm, he can make all the throws. I think if there’s any indication of the first game, he’s improved from last year,” Kentucky defensive quarterback Matt House said.

“There was definitely some of the concepts that we’ve seen coach Mullen have before,” House said. “You can definitely tell it’s the same type of system.

House says that he was pleased with his defense’s tackling abilities on Saturday against CMU, but that there’s always room for improvement.

“I was pleased for the most part with our tackling, but it’s also a big point of emphasis. It’s something we practice every day. Certainly in order to have success in this game we’re going to have to play well in the space and tackle,” House said.

In regards to Chris Westry being thrown out of the game Saturday for targeting, House says it was an obvious target and that it would get called “100 times out of 100 times.”

“Chris has just got to understand not only the situation, but where the hitting zone is. That hitting zone changes, and then situational awareness,” House said.

House says junior linebacker Kash Daniel was as productive on Saturday as the box score showed (Daniel tallied his career-high 11 tackles), but that “it was just game one, and there’s a ton of things he can do better to play more productive.”

“I did alright, you know, for my first start. But obviously there’s a lot of things I can get better at,” Daniel said.