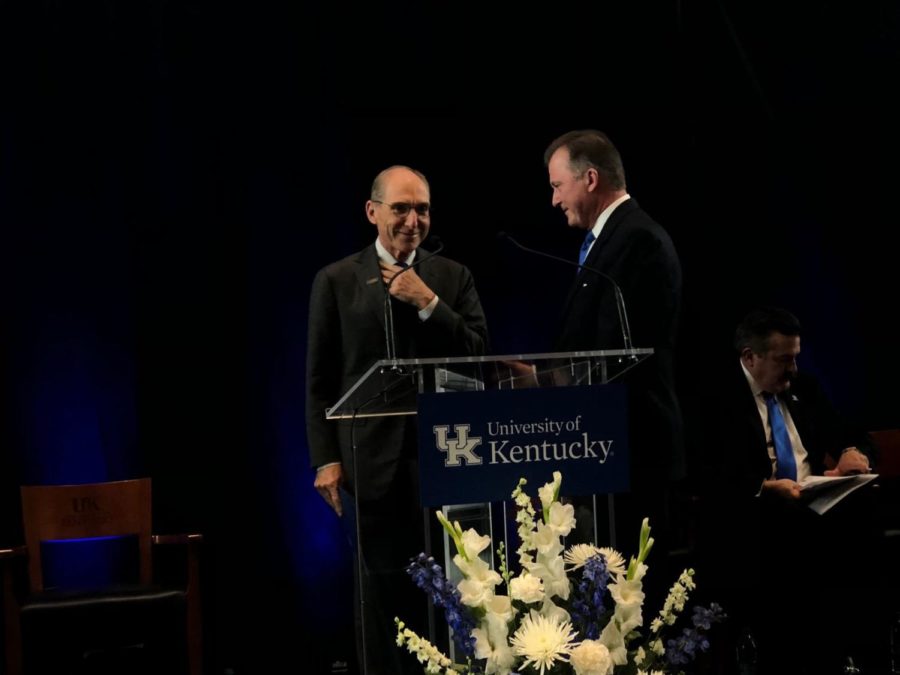 President Eli Capilouto talks with UK Board of Trustees Chairman Britt Brockman during the unveiling of UK's $265 million research building on Sept. 21, 2018. Photo by Jacob Eads

UK has officially unveiled its newest weapon in its fight against curbing health disparities in the commonwealth.

“What’s important about this building today, is that it’s a testimony to the future,” said Capilotuo. “We stand in the manifestation of UK’s promise: this new multidisciplinary research building. A $265 million promise of a better and brighter future for Kentucky.”

Kentucky is firmly planted among the nation’s leaders in deaths from cancer, opioid overdoses and addiction, and diabetes, leading some state leaders to view this new building as a vital addition to the state.

“We need it. We need it because we’re number one in cancer. We’re number two in heart attacks. We’re number five in drug overdoses. We’re number six in strokes. And it’s really great to see that UK is leading the way in pioneering the potential for cures,” Barr said.

The new six-floor, 300,000 square foot facility comes as the product of increased partnership between UK and the state government.

The state of Kentucky invested over $130 million towards the completion of the building in 2015, leaving the university to come up with the remainder of the funds. The state also appropriated another $40 million in bonds towards the space during the 2018 legislative session.

UK’s leaders say the building will play host to hundreds of scientists, researchers and students, in hopes of bringing together experts across multiple disciplines. The building was designed very intentionally with fewer walls to break down barriers between disciplines and spur collaboration, according to UK Vice President for Research Dr. Lisa Cassis.

While UK only unveiled phase one of the expansive building today, officials are still eager to see how the early stages of the building can be utilized to thwart cancer, cardiovascular diseases, diabetes and substance abuse.

“We’re going to show the world what Kentucky can do,” Capilouto said.

The new research facility has been a dream long in the making for some of UK’s academic faculty. They view the investment as an important step in UK’s contribution to health.

“In my 30 years here as a faculty member at UK, I’ve really never been so excited,” said Cassis. “The facility will allow us to think outside the box, which is what it’ll take as we set our sights on reducing the burden of these disease.”

Members of UK’s administration also see the addition of the building as a positive for students.

“To be able to work in this kind of facility with world class scientists, you’re going to learn a lot. You’re going to contribute to the science that’ll make life better, and you’re going to be prepared to be competitive in the work force,” said Capilouto.

While all in attendance at today’s unveiling ceremony championed the potential of the new research facility, most were adamant about celebrating Kentucky’s commitment to changing its public health.

With the doors open, and the floors shined, all that’s left for UK is to begin their crusade against preventable diseases.