‘Celebrating a life’: Vigil honors UK student who passed away while studying abroad 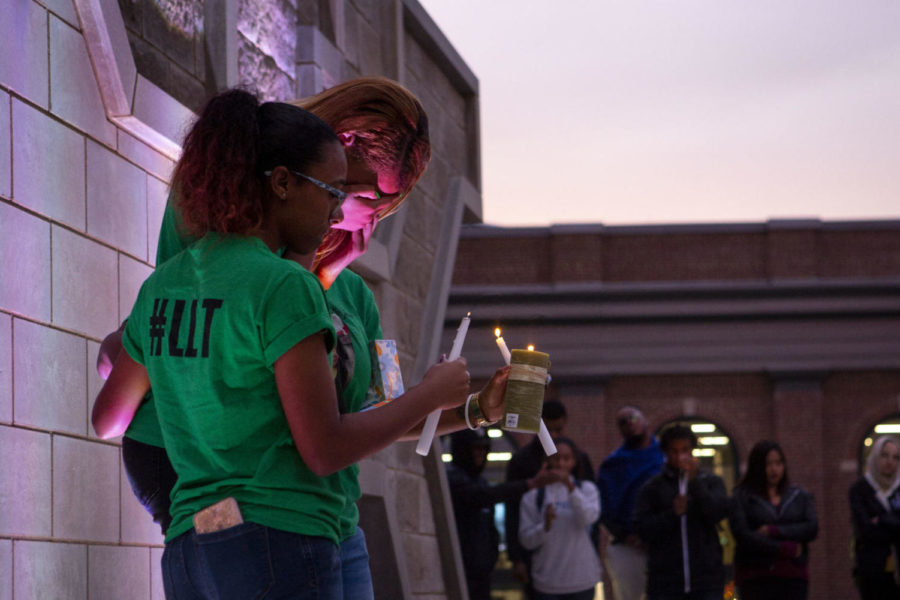 Nia Taylor, Te'Niya Jones' roommate, covers her face embraced during the candle lighting outside the Gatton Student Center on Thursday, Sept. 27, 2018, in Lexington, Kentucky. A vigil and candle lighting ceremony was held in honor of Jones, who was a UK student who died in a swimming accident while studying abroad in Israel this summer. Photo by Arden Barnes | Staff

Friends, loved ones and acquaintances gathered inside the student center Thursday to celebrate the life of Te’Niya Jones at a vigil hosted by the Black Student Union.

Jones was a UK sophomore who passed away in a swimming accident while studying abroad in Tel a Viv, Israel, this past summer.

UK’s Black Student Union organized the vigil, and the UK Black Voices Gospel Choir was in attendance and began the vigil with a song.

After the song concluded, Royal Todd, a friend of Jones’ and an RA in her dorm, made an emotional speech to begin the celebration of her life.

Friends of Jones described her as determined, driven and caring.

“If she wanted it, she was going to get it,” Jones’ roommate Nia Taylor said tearfully. “If you were her friend, there wasn’t anything that she wouldn’t do for you. I mean, that being said, she was always honest with you, whether you wanted to hear it or not.”

According to Taylor, Jones had been studying biology and wanted to be a surgeon. She had torn her ACL in high school, and though she hadn’t specified what kind of surgeon she wanted to be, she leaned toward orthopedic surgery.

“She knew that [she wanted to be a surgeon] from the moment she stepped on campus,” Taylor said.

Friends also described her as being extremely put-together on top of being ambitious.

“She was about her business,” said Jahqethea Johnson, a friend Jones had met in class. “She did all of her schoolwork, you could always catch her doing her homework or something like that. Or if she broke a nail you knew she was going to the nail shop.”

They saw her as a person of strength and comfort, and a person they could always go to for help.

“She was a vibrant person all-around,” friend Alexis Longstreet said. “If you were around her, she made you feel comfortable, no matter what. I feel like if you think of her, whatever you’re going through, you’ll be like, ‘that is my example of strength,’ and feel better.”

Jones was a member of the Black Voices Gospel Choir, and among the crowd were acquaintances who knew her through the Christian group.

“I didn’t know Te’Niya very well,” Black Voices Gospel Choir member Merissa Joseph said. “But I had the pleasure to kind of represent what she believed in, and that is the Christian faith. We got to sing together as a part of Black Voices. I feel really privileged and honored to be a part of this beautiful and moving moment.”

After one of Jones’ professors and a friend from class presented poems that they felt best suited Jones, the ceremony was moved to the Courtyard of Champions outside the student center for the candlelight vigil. While loved ones lit their candles, a rainbow presided over the ceremony.

“This means a lot,” Taylor said through her tears. “It just shows the type of person she was and how everyone loved her.”