Stoops cements his legacy with win over Florida 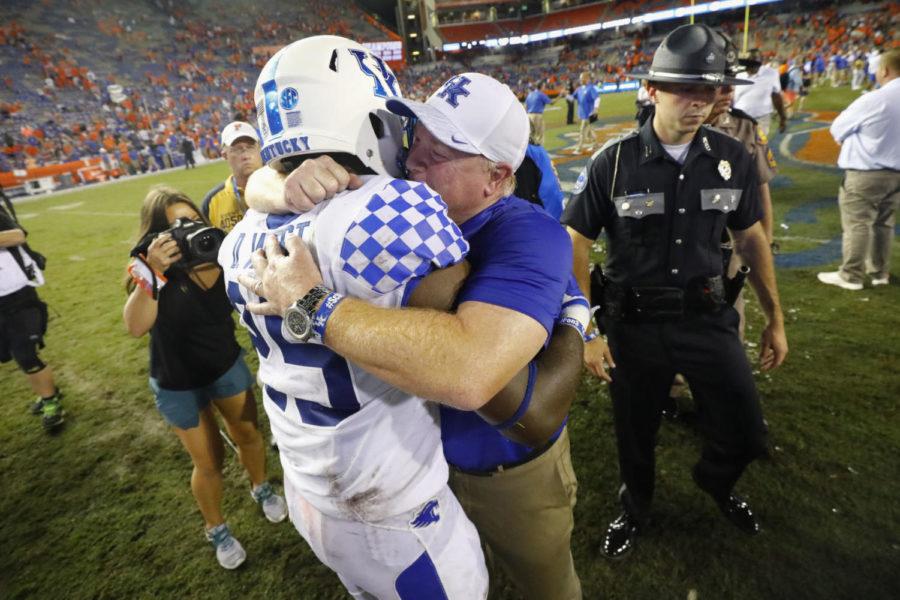 Here are some of the names that come to mind when you think of Kentucky football’s greatest coaches: Paul Bryant, Rich Brooks, Jerry Claiborne and Blanton Collier.

After Kentucky’s program changing win over Florida, add one more name to the list.

Stoops did something that five coaches before him, including Brooks, could not do in the last 31 years, and that’s defeat the Florida Gators. The win is one of the biggest if not the biggest in Kentucky history and will likely be the biggest win of Stoops’ career.

Of course, one win does not define a coach or a team. This win alone does not cement Stoops’ legacy amongst Kentucky’s great, even a win of this magnitude.

What catapults Stoops near the top of Kentucky football’s greatest coaches is the journey that he went through to get to this pinnacle.

In Stoops’ first three years at the helm of Kentucky football, he led the Cats to a 12-24 record, with a total of four SEC wins and no bowl game bids. Many were wondering if Stoops was the coach for the future.

In the next two seasons, Stoops would take the program to new heights with wins over rivals Louisville and Tennessee. Stoops also led Kentucky to back-to-back winning seasons, the first since 2008-2009, and bowl games in consecutive seasons.

The success brought contract extensions for Stoops, who will be the head coach through the 2022 season. Even after being declared UK’s coach for the future, one thing still held Stoops back from climbing the top of the mountain: beating Florida.

UK came close to ending the streak in 2014 and 2017 under Stoops, but the Cats weren’t able to get the job done. However, all the past failures were erased with Stoops’ most prized win as Kentucky’s head coach.

Of course, a lot of credit is due to the players that Stoops coaches. Terry Wilson had an unbelievable game in only his second start in an FBS football game.

Benny Snell again put the Cats on his back and rushed for 175 yards on 27 carries.

The defense held the Gators to 360 yards on their home field, 94 fewer yards than UK’s total. Big performances from Josh Allen, Darius West and Kash Daniel helped fuel what was an overall team victory.

However, one man united that team and convinced them they were capable of pulling off a massive upset. One man, with the help of his staff, came up with a game plan to beat the Gators and executed it to near perfection. One man always believed his team was loaded with talent when others were saying it’s not Kentucky’s time.

That man is Mark Stoops.

His efforts have led to what is a defining moment in Kentucky football history. No more can football fans say Kentucky can’t compete in the SEC, or Florida has beaten Kentucky the last 31 years.

All of that has been erased with one massive win that will elevate Stoops toward the top of the list of Kentucky’s top coaches and cause him to be remembered for quite some time.