Austin MacGinnis investing into his future 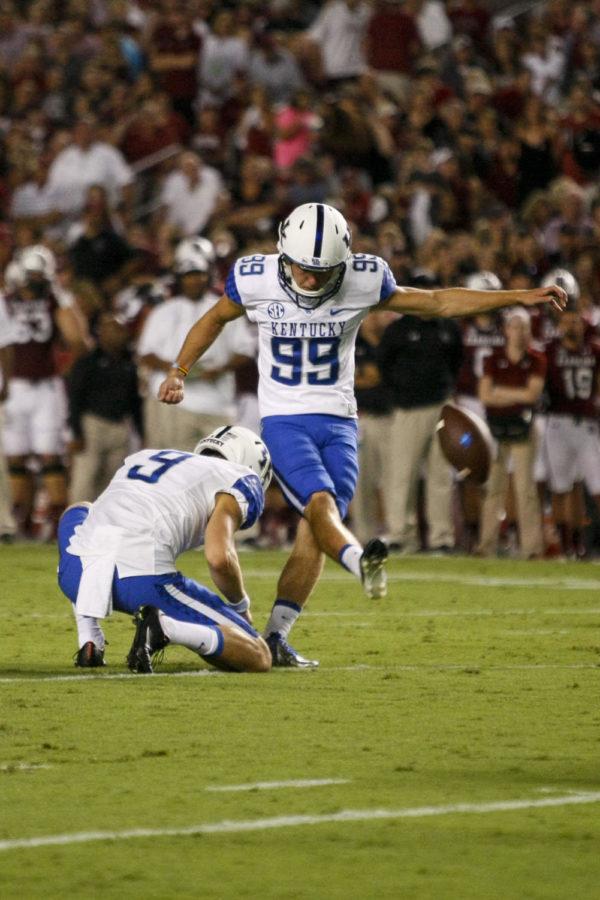 Kentucky kicker Austin MacGinnis kicks a field goal during the first half of the game against the South Carolina Gamecocks at Williams-Brice Stadium on Saturday, September 12, 2015 in Columbia, SC. Kentucky defeated USC 26-22. Photo by Taylor Pence | Staff

Since a young age, Austin MacGinnis was associated with money.

During his animated career at Kentucky, MacGinnis was “money” on several kicks, such as his game-winning 51-yard field goal against Mississippi State in 2016. Fans also can’t forget MacGinnis’ game winning field goal against Louisville just over a month later.

Before all his “money” kicks at UK, MacGinnis had an early interest in money, picking up extra chores to get his hands on all the money he could get.

“My grandpa used to always call me ‘moon-yah,’ money, because I used to always go around asking for money and doing anything I could for money, whether that was laying brick in front of his house or mowing lawns or selling livestrong bracelets,” MacGinnis said. “I’ve just always had an affection for money so that led me into learning about investing.”

Now, MacGinnis is interested in putting money in other people’s hands through his career in financial advising. MacGinnis graduated from Kentucky in May of 2018 with a degree in finance and is currently working as a producer for Salomon & Company, a family owned wealth-planning firm in Lexington.

“I like to help people out too and I feel that people stress about money, people break up about money, get divorced over money,” MacGinnis said. “People say money is not everything, it’s not, but it’s also a very important factor in our lives.”

Despite getting his career in financial advising started, MacGinnis still has hopes of starting his professional kicking career as well.

After going undrafted and spending three days at the Chicago Bears’ Rookie Minicamp, MacGinnis spent the whole summer training in the weight room and getting stronger, in hopes of getting noticed by a professional team.

“I’ve just switched my focus back to what I was kind of doing in my younger days in high school with more explosiveness,” MacGinnis said. “Box jumps, hill sprints, just getting after it again.”

In the middle of August, MacGinnis attended a kicking combine in San Diego, and the teams in attendance told MacGinnis that he did really well. MacGinnis also said there will be plenty more combines and opportunities to work out in front of NFL teams in January, and he plans to attend as many as he can.

On top of the NFL, MacGinnis is also open to the idea of signing with an alternative professional team, such as in the Alliance of American Football (AAF).

The AAF is an alternative professional football league that was created in March 2018, with plans of kickoff in February 2019. One of the teams in the league is Alliance Memphis, which already includes former Kentucky players Blake McClain, Ryan Timmons and Cole Mosier.

However, the kicking job is still open for Alliance Memphis, and MacGinnis plans to attend the team’s tryout.

“We had a bunch of Kentucky teammates sign with them, so I ended up just calling the GM myself and said, ‘Hey, take a look at me,’” MacGinnis said. “They said they were going to have a competition for the kickers that they’re looking to tryout, hopefully he’ll follow through with his word and I’m going to show up for that.”

Whether it’s the NFL, AAF or who knows what, MacGinnis will continue chasing his pro football dreams for the next couple of years and believes he will eventually find himself on a roster.

“I know I’m good enough, you just got to get a little bit lucky along with being good,” MacGinnis said. “I just keep getting better everyday.”

If MacGinnis were to get picked up by a pro team, he and his boss already have a plan in place on how to manage MacGinnis’ financial clients.

“In the offseason, of course I’ll be back managing that [clients],” MacGinnis said. “Having that relationship, someone that will work with me and help me out is great.”

MacGinnis did not initially start working as a financial advisor straight out of college. When he graduated, MacGinnis started as a credit analyst for Central Bank. However, MacGinnis only stayed with Central Bank for a month and a half, as he did not feel that it was the right fit.

“My heart was in financial advising, and so I took some things that I learned at Central Bank just in the way of how loans work, how money is distributed and started working with Salomon & Company,” MacGinnis said.

Since joining Salomon & Company, MacGinnis feels that he has landed in the right spot. He enjoys the work he does, and plans to do it till “the day I die.”

On top of helping the people of Lexington with their financial questions, MacGinnis is also hoping to get the chance to speak to this year’s Kentucky football team about the importance of financial planning.

When MacGinnis first came to Kentucky, he invested $20,000 and saw that investment gain 50 percent during his career at UK. With several players on the roster that could make a living playing football, MacGinnis wants the chance to speak with them before their careers take off.

“I’ve been in their shoes, you can bring in other people but I just feel like I can relate to them so much better,” MacGinnis said. “I’ve been there, done that, our personalities aren’t that much different so I know they can invest as well and see the dividends that it pays off.”

Even if MacGinnis can’t get that meeting with the players, he will still be in the facilities training for his ultimate goal of being a professional kicker.

MacGinnis knows he has to be patient and wait for his opportunity since kicking jobs are hard to get on the professional level, but he knows that if he continues down the path he’s going down, he’s giving himself the best shot.

“It’s tough to get in but if you can stick with it and keep getting better and just be the best guy at these camps, just make it to where they can’t miss you, you’ll eventually get picked up,” MacGinnis said.