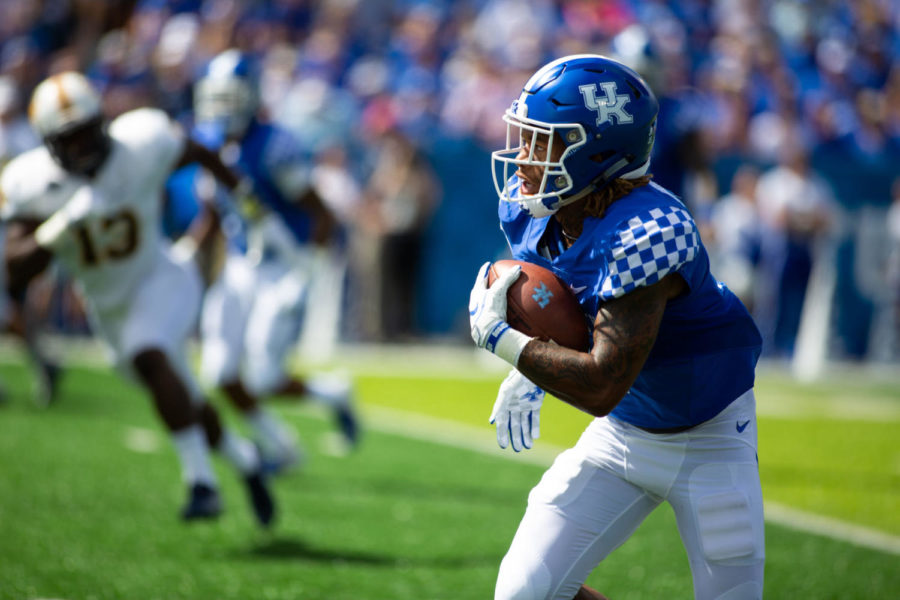 The Kentucky Wildcats traveled to Columbia, Missouri Saturday looking to grab their seventh win of the season—and they did just that. The Cats slowly made a comeback and defeated the Tigers last-second 15-14.

Kentucky scored early in the opening drive of the game, showing promise, after driving down field and bringing out Chance Poore to kick a field goal. Lynn Bowden was a big help for the Cats in that drive, catching a 45-yard pass from Wilson to put them in field goal position. After the made field goal, though, the Cats wouldn’t go on to score again until the fourth quarter.

The Cats began to struggle offensively as the Tiger defense contained star running back Benny Snell. Kentucky used two quarterbacks in the first half, utilizing Danny Clark on third down for a power run in the first quarter. He fumbled the ball, but after review the rush was called a first down. The Cats would go on to go for a fourth down, but Missouri forced a turnover on downs.

The rest of the first quarter would remain 3-0, but the Tigers came into the second quarter and scored a touchdown thanks to running back Damarea Crockett. A Kash Daniel penalty hurt the Cats late in the drive, as he was called for pass interference on third and goal, giving the Tigers a new set of downs. An extra point following the touchdown would put Missouri up 7-3 in the second.

Things remained quiet for the Cats, but Missouri would go on to score again at the end of the second quarter on a 51-yard drive to go up 14-3.

Coming out of the half, neither team was productive on offense as no points were scored in the third quarter. The Kentucky defense was lock-down while its offense continued to struggle. In efforts to be more efficient, the coaching staff put in backup quarterback Gunnar Hoak, but his performance didn’t help the Cats as much as they’d hoped.

A glimmer of hope came for the Cats in the fourth quarter by their arguable best player of the game, Bowden. The sophomore ran back a touchdown with around six minutes left in the game to put six points on the board for the Cats. After a failed two-point conversion, Kentucky still trailed the Tigers 14-9.

Leave it to none other than Kentucky’s reliable defense to force a Missouri three-and-out to give the Cats the ball back with four minutes left in the game. However, Wilson was picked off on a deep pass to Tavin Richardson, which gave the ball back to Missouri.

The Tigers went three-and-out yet again after Lock’s third down pass was incomplete, which brought out their punting unit with 1:36 left.

Wilson would then go on to shock the country, leading the Cats down the field in an 81-yard drive resulting in a touchdown to win the game.

After several passes down the field, the Cats found themselves in the red zone with hardly any time left on the clock. Wilson threw a pass to the left corner of the end zone to Ahmad Wagner, which wasn’t caught, but a pass interference call on the defense gave Kentucky first and goal. After a Missouri timeout, a Wilson two-yard pass to C.J. Conrad into the end zone won the game, moving the Cats’ record to 7-1.

Kentucky will return to the field for its biggest test of the season next Saturday against the University of Georgia.