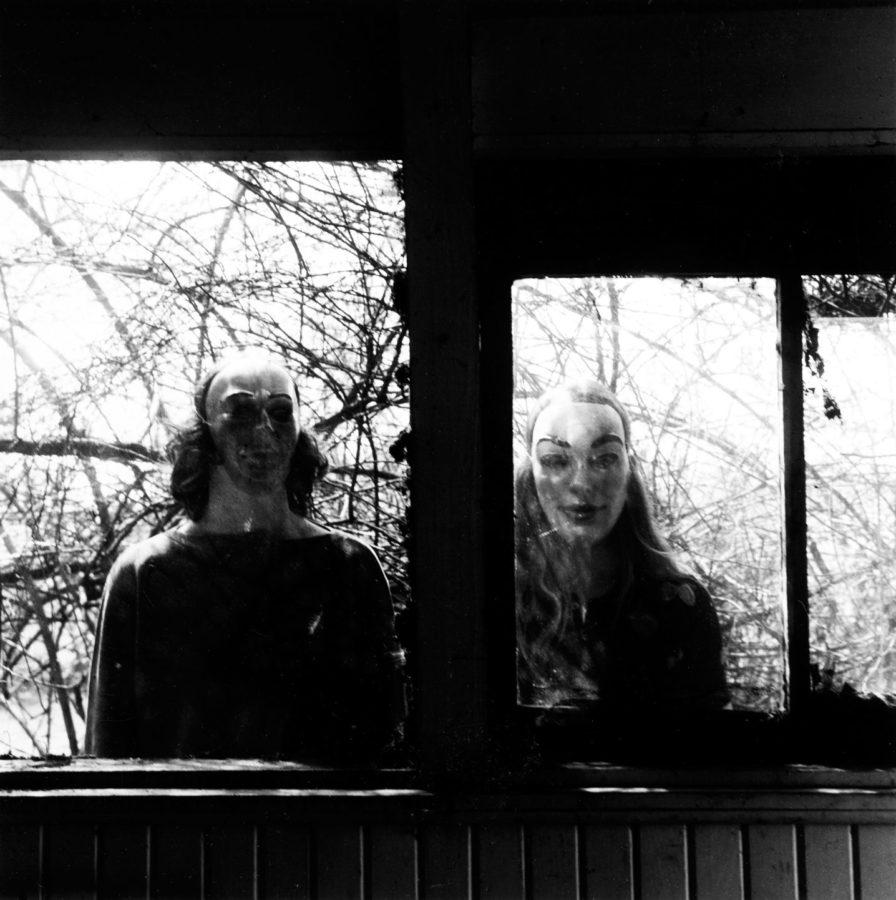 Meatyard currently has 99 photographs, including this, on display at the UK Art Museum.

Meatyard, who died in 1972, worked out of Lexington but hailed from Normal, Illinois. The irony of his hometown was not lost on Janie Welker, curator of the UK Art Museum.

“It’s kind of funny,” she said, “because he’s kind of extraordinary.”

The exhibit is a set of Meatyard’s photographs that have rarely been seen before.

“It’s a unique opportunity to see some of his unseen work,” said Welker. “It’s not all of his greatest hits.”

Welker claims this show to be one of the biggest exhibitions of her career, and something “long overdue.”

Welker worked with Stuart Horodner, the director of the UK Art Museum, to sift through hundreds of photographs, cutting it down to an original 200 and then cutting that in half for the final edit of 99 photographs.

“To work with this ‘trove’ of this photographer, of his work, of this place– is amazing,” Welker said.

Welker had to ask herself how to prevent the 99 photographs from overwhelming viewers. Christopher Meatyard, Ralph Eugene Meatyard’s son, suggested that the photos would work best upstairs in the museum with its smaller area and lower ceilings. Welker and Horodner agreed.

Welker worked thematically, grouping photographs together by connections she saw in her mind.

Meatyard worked with found places and found objects— creating and staging scenes for his photos and using his friends and family as models.

“Now, no one thinks anything of staging photographs,” said Welker, “but he was one of the first.”

Guy Mendes, a longtime friend of Meatyard’s and an instructor in UK’s School of Art and Visual Studies, said that he would send objects of interest to Meatyard, which often appeared in photos months or years later.

Mendes himself made multiple appearances in his photographs. Mendes said that he’d visit Meatyard, be offered a beer then end up in a mask within the hour.

“The major thing I learned from hanging out with him was the sense of play and exploration and experimentation,” Mendes said.

Meatyard would often have his children, wife and friends pose in masks as a way to represent “every man” or “every child.”

Meatyard was a voracious reader. The exhibit features a list of some of the books in his collection, including books full of poetry, books about history, eastern philosophy and Zen Buddhism.

“He got ideas from so many different sources,” said Welker. “They were never translated literally but everything he read informed his work.”

Meatyard’s interest in Zen is directly related to his use of anonymity in photographs.

“His emphasis on Zen was how we are all the same, what connects us on a deeper, spiritual level,” said Welker.

“If you were a doll in the Meatyard household, it was kind of a tough gig,” said Welker. “You witnessed all kinds of things, clutched by small boys that did not look very happy about it.”

“I thought it was really wonderful because it was another aspect of him confounding expectations, taking you out of what you are expected to see,” said Welker.

Meatyard was also a businessman who owned a local optical practice called Eyeglasses of Kentucky, located on Waller Avenue in the Imperial Plaza.

“He wasn’t an academic. He made eyeglasses for a living, which is sort of prophetic,” Mendes said.

Meatyard became a photographer through the influence of the Lexington Camera Club via Van Deren Coke, another internationally known photographer hailing from Kentucky.

Coke took Meatyard under his wing, who then took Mendes under his own. “[The Lexington Camera Club] changed his life, and he in turn, changed mine,” Mendes said.

The 19-year-old Mendes was on assignment for the Kentucky Kernel, interviewing now-Kentucky poet laureate Wendell Berry, when he met Meatyard for the first time.

“There was a man with knickers and an Irish woolen hat, a strange camera with two lenses that he looked down into. He pointed it at places that made you wonder what the hell he was looking at,” Mendes said. “And that was Ralph Eugene Meatyard.”

Mendes said Meatyard was the one who changed how he thought about photography, who made him realize photography “could sing like a song or a rhyme like a poem.”

Meatyard’s impact on Mendes is obvious in his work, some of which is displayed in a secondary exhibit called “Downstage from Meatyard,” located on the first floor of the museum. The artwork in this exhibit was inspired by Meatyard.

Mendes said that having his work displayed with Meatyard’s is an honor, but it also feels normal.

“Camera Club photographers, we’re used to showing together and seeing how our work bounces off of each other,” said Mendes. “So on the one hand it seems regular. On the other hand, it’s a thrill and a privilege.”

The work Medes chose to show included some photographs of his family and others of locations and subjects inspired by Meatyard.

Mendes said he’d occasionally photograph his children who had created Meatyard-esque masks on their own.

“I would turn around; they’ve got three goggles on. They’d have swim goggles or a knit hat pulled over the face. Suddenly I had a little mini Meatyard photograph on my back steps,” Mendes said.

House’s play, “False Face,” was inspired by the mystery of Meatyard’s photographs, which show the complexity of humanity.

Kentucky was home to both House and Meatyard. Kentucky’s impact on Meatyard is concrete in his use of the landscape and architecture of the area.

“I think anytime you’re a writer from here or living here you can’t help but to be shaped by the place and its people,” House said. “Kentucky is a powerful and… very complicated place and that makes for great art.”

“So far people have been going nuts over this show,” Welker said. “I challenge anyone to come here and not find a single photo they aren’t completely fascinated by.”