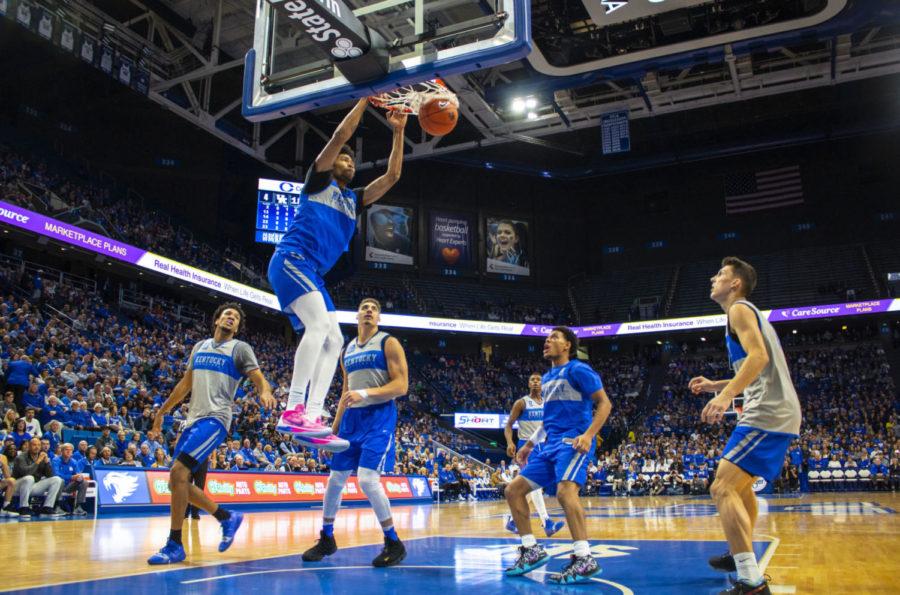 The blue team scores a point during the Blue-White game at Rupp Arena on Sunday 10 21, 2018 in Lexington, Kentucky. Photo by Olivia Beach | Staff

The Kentucky Wildcats’ 2018-2019 team showed fans a preview of what’s to come this season on Sunday night in their annual blue and white scrimmage. The blue team came out on top with a 104-96 win.

The first points of the scrimmage came from Montgomery, who blocked Quade Green and consequently drained a mid-range jumper on the other end of the floor. The freshman started out strong, having 11 points, three rebounds and a block in the first half.

The score teetered back and forth throughout most of the first period, the biggest lead being the blue team’s 27-20 lead mid-first half. The white team responded and scored seven points to tie it up with the help of Travis and Herro. Travis scored a layup to start the run and had a block which resulted in a Herro three-pointer, and then hit a jumper a few plays later to even out the score.

At the half the blue team led the white team 52-51. Travis led the team in scoring with 16 and tied Richards in rebounds with seven.

The lineups for each team changed in the second half as they switched to freshman vs. veterans, making the blue team consist of Green, Baker, Washington, Travis, Richards, and Calipari, which left Quickley, Hagans, Herro, Johnson, Montgomery and David on the white team.

The veterans came out of the half and took over, Travis reaching 20 points early and the blue squad outscoring the white 23-6 in just the first approximate five and a half minutes.

Herro shone through for the white team in the second half and in the game in general, scoring a total 34 points on 12-16 field goal shooting, five rebounds and three assists. Montgomery also added 17 total points and seven rebounds.

The blue team pulled away for the 104-96 win, their biggest lead being 18 points.

The Cats face an opponents of the regular season next Friday, October 26th in an exhibition game against Transylvania University.