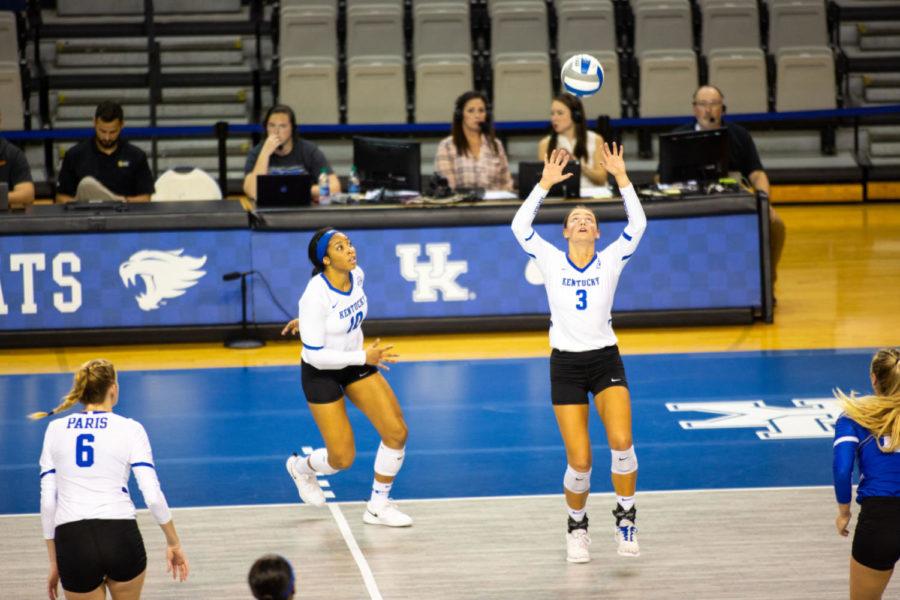 Sophomore Madison Lilley sets the ball during the game against Tennessee on Thursday, Oct. 10, 2018 at Memorial Coliseum in Lexington, Ky. Kentucky won 3 sets to 1. Photo by Jordan Prather | Staff

The No. 12 Kentucky volleyball team aims to “treat” its record to another SEC win by defeating the No. 11 Florida Gators with the Cats’ “tricks” on Halloween night.

The matchup taking place on Wed., Oct. 31, is one of the Wildcats’ most competitive games yet in the season. UK is currently the only undefeated team in SEC matches, and they aim to keep it that way with this highly anticipated game.

“There’s a lot of respect between [Florida and Kentucky],” coach Craig Skinner said. “I think that goes a long way in how you prepare for these teams.”

A large majority of the respect between the two programs has stemmed from the collaboration that individual players had playing with each other during the summer for Team USA volleyball.

Madison Lilley, sophomore setter and three-time 2018 SEC Player of the Week, acknowledged benefits of the familiar atmosphere between the two teams.

“I’ve played with three or four of the girls on the team,” Lilley said. “Competing against them, obviously, is game on but it gives you a little bit of insight in the way they play.”

Kentucky and Florida usually match up twice per season, but this year the competition takes place only once. With trick-or-treating being moved to Tuesday, Oct. 30, in Lexington, the team hopes that the crowd will bring spirited support for the home team.

“Everyone is trying to get [Memorial Coliseum] packed,” Lilley said. “I would love to play them twice, but I’m happy that the one time we’re playing them is here.”

Beginning the season with an 0-3 record, the team has come a long way to be undefeated in the conference, and the threat that the long-rivaled Gators bring to the table has the players hungry to protect that title.

“We’re first and second in the league,” Skinner said about the two teams’ rankings in the SEC. “I think it says a lot about where the programs are historically that we’re always trying to compete for championships and make runs to the NCAA tournament.”

Playing a team of high-caliber like the Gators has caused Kentucky to closely evaluate their weaknesses and prepare for what is expected to be a great night for volleyball. Kentucky’s defense is expected to be especially challenged, but Skinner said he thinks that the players are ready to “scare” their opponents.

The Kentucky Wildcats take on the Florida Gators at 7 p.m. on Oct. 31 at Memorial Coliseum.