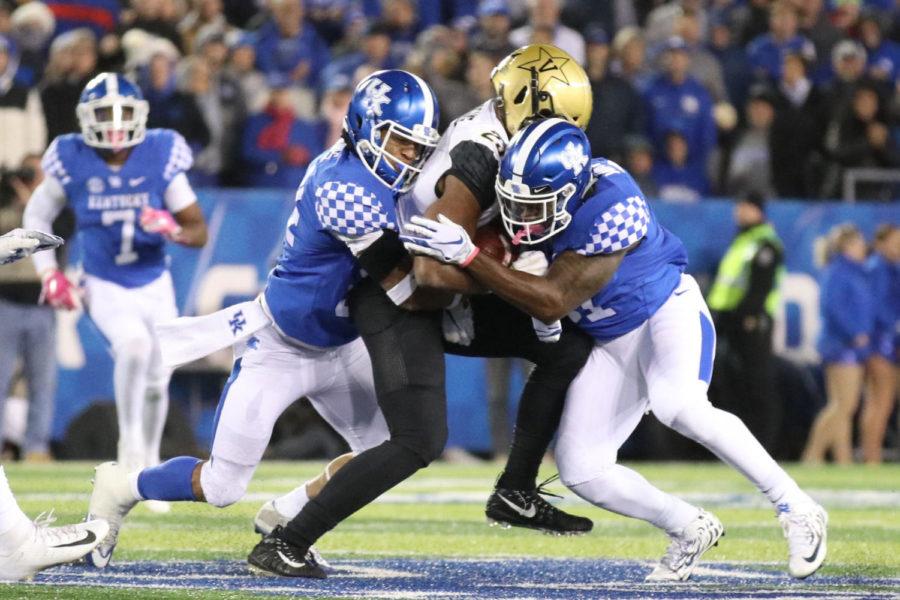 Jordan Jones makes a tackle during the game Vanderbilt on Saturday, October 20, 2018 in Lexington, Ky. Photo by Chase Phillips | Staff

The No. ranked 12 Kentucky football team will take on the offensive-minded Missouri Tigers Saturday, and UK’s defense talked with the media after practice to preview the upcoming game.

Linebacker Kash Daniel wore a red jersey at practice Wednesday, signaling other players not to hit him and to be cautious. After breaking his hand last game and having a minor procedure to his hand Monday morning, Daniel will be forced to play next game with a club on his hand.

Daniel hasn’t had many problems tackling players in practice, but now he has to tackle differently due to the injury. He can’t bend his wrist on the hand where he’s wearing the club, so now it’s a matter of “bear-hugging with the right arm and going down to the ground that way.”

“I can wrap up still,” Daniel said.

Defensive coach Matt House has noticed Daniel improving as he gets used to the club.

“He’s been working with it in practice, and I think he’ll be fine,” House said.

Henry Clay graduate Davonte Robinson is living his dream playing for UK. The Lexington native is playing hard and staying late after practice to get better, and with numerous senior defensive backs, the sophomore safety knows the importance of playing well.

“They’re trying to get us reps for next year, I guess, but we’ll just keep working hard,” Robinson said. “We’re in the film room all the time, watching extra film, doing whatever we can because next year we’re gonna lose a lot of guys.”

The Tigers have a senior quarterback, Drew Lock, who was expected to go early in the NFL draft. Members of Kentucky’s football team commented on how impressed they were by his game.

“I definitely think he could’ve went [to the NFL] last year,” Daniel said. “He’s probably one of the most dynamic quarterbacks I’ve seen on film.”

“He’s got unbelievable arm talent,” House said. “I think he hangs in there and makes tough throws. He can see coverages, and he knows where he’s going with the ball.”

The Tigers play a high-tempo style of football and have an explosive offense that ranks near the top of the FBS rankings. Senior linebacker Josh Allen hopes UK’s high-powered defense can counter them.

“This is going to be a good matchup for our defense,” Allen said. “This will help solidify our defense, and I’m just really excited for this matchup.”

Kentucky will face the Tigers at 4 p.m. on Saturday in Columbia, Missouri.