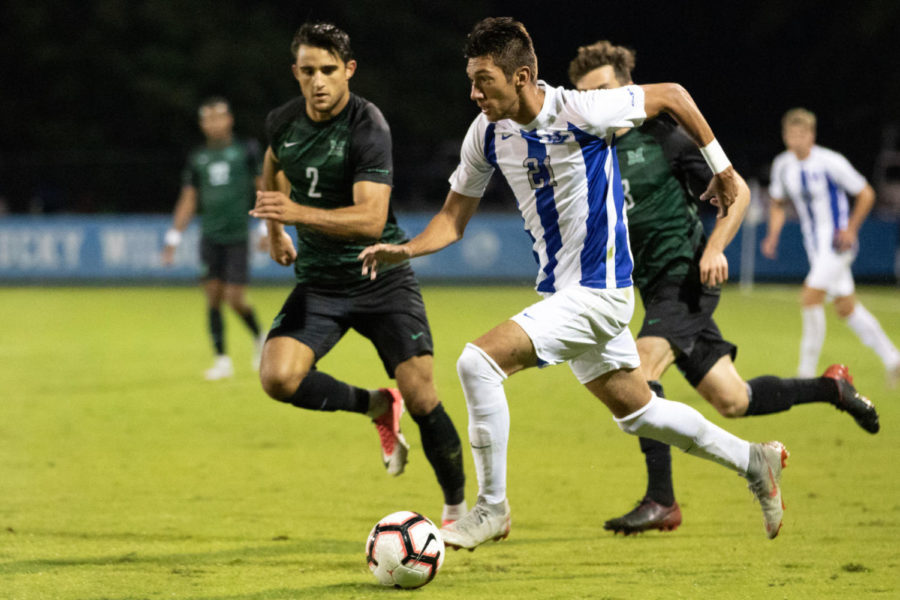 The UK men’s soccer team has now won two in a row following a win on the road over the Ohio State University Buckeyes on Tuesday night. UK defeated OSU 3-0 from the strength of three different scorers.

The 3-0 score is UK’s highest on the road this season.

Midfielder Kalil Elmedkhar started things off for UK with his opening goal in the 10th minute. Elmedkhar now has five goals this season, which is second most on the team behind J.J Williams.

Freshman standout Jason Reyes buried the Buckeyes even deeper with his own goal just seven minutes later. He shot the ball from 23 yards out into the upper right goal to extend the lead 2-0. Reyes now has three goals and the most goals among all UK freshman this year.

UK’s defense stood tall in the first half as the Wildcats’ back four defenders stopped an OSU scoring drive in the 35th minute. Kentucky goalkeeper Enrique Facusse kept Ohio State in its tracks with three saves in the half. Facusse’s clean sheet Tuesday night gives him his 10th clean sheet in 13 games.

Things only got worse for the Buckeyes in the second half. They played a man down for the rest of the half after Jack Holland received a red card and was ejected in the 49th minute. Two minutes later, the game was officially put away by Williams.

Williams got the ball and shot it from just inside the outer box. The ball went off the right post and into the goal as Williams scored his 11th goal this season. He maintains his position as the C-USA leader in goals scored this season.

The Cats have defeated the Buckeyes for the second straight season. UK defeated OSU at The Bell last year in a 1-0 victory. UK is now 11-1-1 (4-1 C-USA) this season – still sitting atop the C-USA standings.

UK will head back home to Lexington for a conference matchup this weekend. It will take on the University of New Mexico Lobos on Sunday, October 21st at 1 p.m at The Bell.