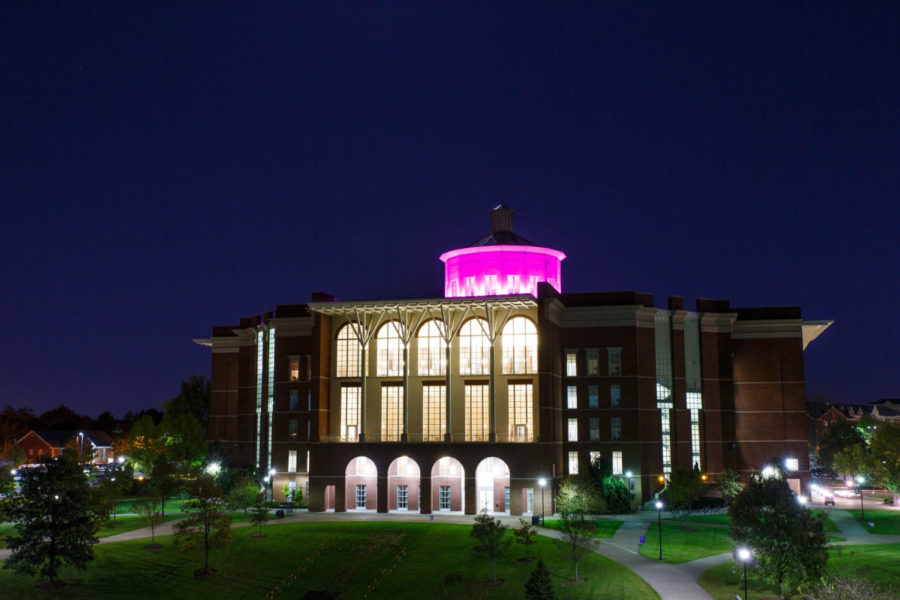 To raise awareness for domestic violence, UK turned the special lighting of some buildings around campus to purple on Tuesday and Wednesday, October 23 and 24, 2018. Photo by Jordan Prather | Staff

UK’s campus has gone from blue to purple this week in a campaign to raise awareness for domestic violence.

The change comes near the end of Domestic Violence Awareness Month, which is intended to encourage discussion of the prevalence of domestic violence.

The campus re-decoration is a collaboration between the Violence Intervention and Prevention Center and several on-campus organizations, according to a UK press release.

The color purple, which has become an unofficial symbol of the movement to combat domestic violence, will be making other appearances on campus as well. Purple pinwheels will adorn the lawn of Frazee Hall this week, and the VIP Center will be painting pumpkins purple in honor of the season.

But these initiatives are only a few of many the VIP Center has taken for DVAM, according to the center’s prevention education specialist, Chelsey Reid.

Earlier this month, for example, members of the Green Team volunteered at Greenhouse17, a shelter for domestic violence victims, and VIP Program Specialist Stephanie Smith created buttons, ribbons and stickers for supporters to wear around campus.

Members of the VIP Center also participated in the Clothesline Project, overseen by Dr. Emily Bonistall of UK’s Department of Sociology. The project allows supporters and survivors to decorate t-shirts with personal messages relating to domestic violence.

According to Reid, the Clothesline Project “blends together survivors’ voices and words of solidarity from supportive others.”

“Supportive others” will find numerous other ways to become involved with the VIP Center’s awareness campaign.

Reid encourages concerned students to volunteer for the VIP Center. Volunteers will provide support for events and tabling throughout the year. Undergraduate students may also apply for Prevention Programming Internships with the center.

“We all have a part to play in making the difference to end interpersonal violence,” Reid said. “Which includes domestic violence and dating violence.”

Even if we do not perceive a direct connection between ourselves and the issue of domestic violence, Reid said, there’s a chance someone we know or care for has been impacted.

According to the CDC, about one in three women and one in six men experience domestic violence during their lifetime.

While this number remains high, the VIP Center will continue to wear purple in support of those affected.