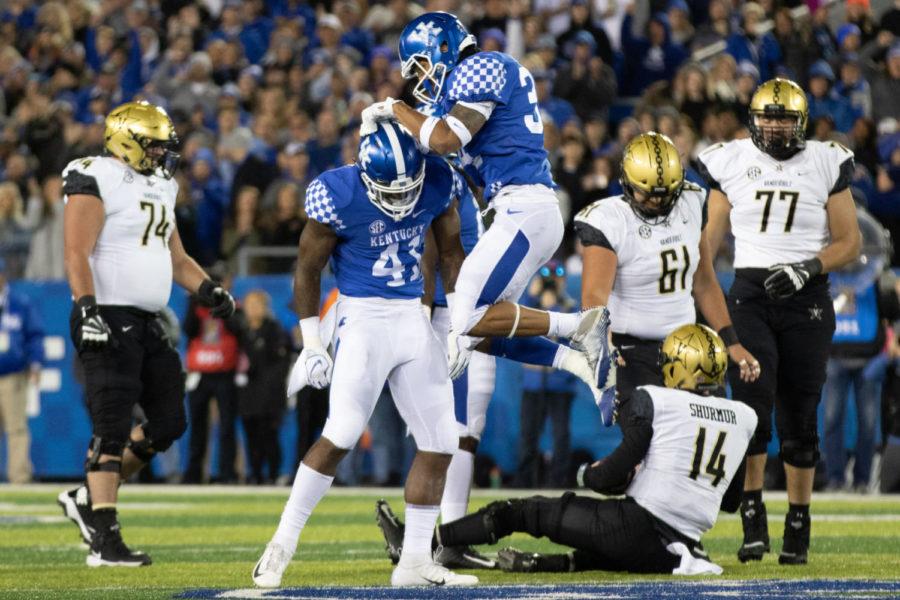 Not a surprise to most, but Kentucky football’s defense stood out yet again in their 14-7 win over the Vanderbilt Commodores, making the Wildcats bowl eligible in their sixth win of the season.

In every level of their defense, the Cats had players coming up with big plays Saturday night. Count eight tackles for loss, four sacks and three forced fumbles to sum up their defensive efforts—not including broken up passes, quarterback hurries and total tackles.

Two of the defense’s most crucial plays came in the fourth quarter when the Cats needed them most. About three minutes into the fourth when Kentucky and the Commodores were tied at 7-7, Kentucky middle linebacker Kash Daniel pressured Vandy’s quarterback on 4th and 1, allowing the Cats’ nose guard Quinton Bohanna to strip the ball out, forcing a fumble and landing on top for the recovery.

“It just shows that one player isn’t just out there making plays,” Daniel said. “It’s awesome seeing everyone work together. You have 11 guys always flying to the ball to get a tackle and that’s one of our standards, it’s what we hold ourselves accountable to. Overall, it was a great defensive play.”

Great for the Cats, but bad for Daniel as he broke his hand trying to strip the ball– however, the junior says he’s got a cast on and is still “absolutely” going to play with it.

“I’ll play with it, sleep with it, walk in it, whatever,” Kash said of wearing the cast.

Daniel led the Wildcats and tied his career high in tackles with 11.

The forced fumble turned into the Cats driving 80 yards down the field to score an eventual touchdown to lead the game 14-7.

Nearing the end of the fourth quarter, the defense came up with another big stop, this time with the help of Josh Allen. The senior linebacker/defensive end sacked Vanderbilt’s quarterback on second down, causing a fumble which was recovered by teammate and safety Mike Edwards.

The Kentucky defense held the Commodores to seven points, but holding teams scoreless is what head coach Mark Stoops wants to do.

“We said that to the defense today, going into the game, that every yard and every point was personal. It means something to us. We’re trying to do our best to shut them out, hold them the as best we can,” Stoops said.

Despite their success, Kentucky’s defense says there are still things to improve on.