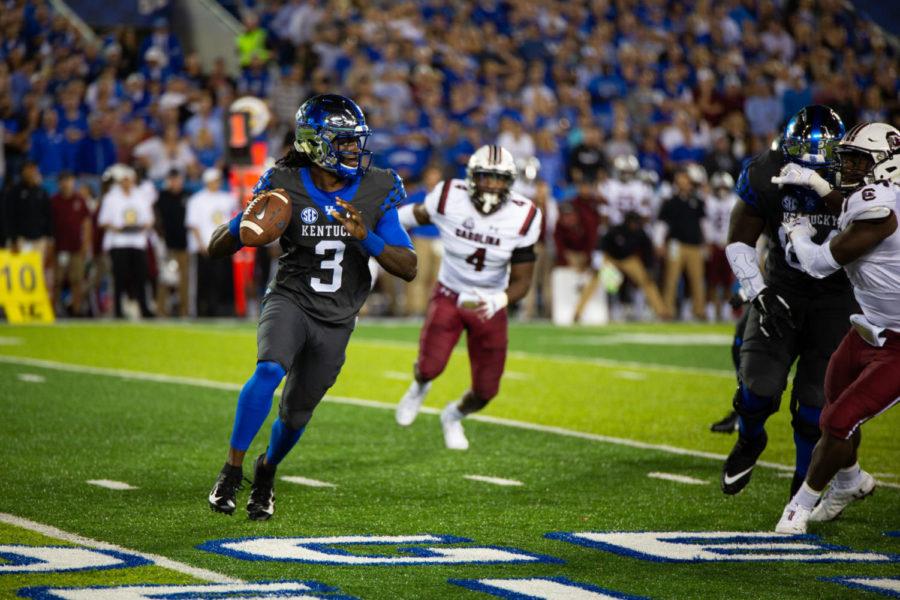 Kentucky football has a much-needed break this weekend after playing six straight weeks of football, and select players spoke with the media after practice Tuesday about their play up until this point.

The no. 17 ranked Cats have recovered from their overtime loss to Texas A&M and are figuring out ways they can improve on both the offensive and defensive sides of the ball.

Head coach Mark Stoops says that after watching the film from Saturday’s game, he’s actually very pleased with the way his team played and was encouraged by the good things that he saw. He says he “really appreciates” the work ethic and fight of his team.

“Obviously disappointed we didn’t come up with a few more plays and we’ll work on that, but love the effort and it’s a good time for our bye week to get out here and continue to build on the good things we’re doing,” Stoops said.

The Wildcats’ offense struggled against Texas A&M’s defense, being limited to just 178 total yards on the night. Stoops says they’re going to work on getting things going at the wide receiver position.

“There is some opportunity this week to look at some ways to create some plays,” Stoops said. “Looking at our options and some of the speed at wide receiver, trying to find some ways to maybe get some of those guys that aren’t getting as many reps on the field.”

Kentucky tight end CJ Conrad gave his evaluation of the offense so far this season and says his team wasn’t quite as physical against the Aggies as they should have been.

“I think we’re in a good spot. I think the bye week came at a good time for us, you know I feel like we know who are now,” Conrad said. “No one wants to lose, but I feel like it was almost in a way good for our offense to have some adversity…. We’re a running football team and I think we got away from that just because we weren’t physical like we need to be.”

The Cats are one win away from bowl eligibility, but Conrad says that’s not on their minds at this point in the season.

“We don’t really think about bowl eligibility. We think about one week at a time,” Conrad said. “We’re 5-1 right now and our goal is to get to 6-1 and try to win the SEC East, because that’s our first and foremost goal.”