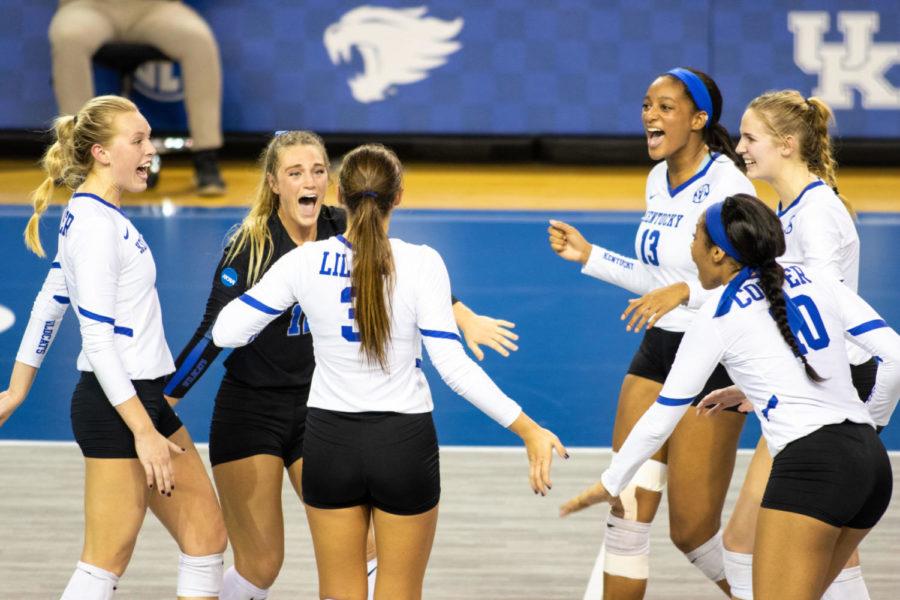 The promised tricks and treats for Halloween night’s game were delivered with Kentucky volleyball’s sweep of the other major power in the SEC.

Kentucky volleyball overcame one of its most anticipated face-offs of its season against the Florida Gators on Wednesday night. The Halloween surprises that the Cats pulled during the match attributed to a dazed opponent, extending the Cats’ win streak to 14 matches. The Cats’ record improves to 17-4, remaining undefeated in the SEC.

“I think we’ve just been playing really well recently all around,” said sophomore setter Madison Lilley. “Our offense was rolling tonight, and our passing was really good.”

Immediately in the first set, both the Gators and the Cats proved that the high anticipation surrounding this game was rightfully deserved. The Gators showed they were hungry to knock Kentucky off its first-place throne in the SEC, and the Cats responded by showing that they were ready. The Cats used tips and emphatic kills that landed just inside of the lines to effectively throw the Gators off guard. Kentucky was halfway to the set victory already by the time Florida managed to score its first seven points.

The second part of set one continued to test both teams with long rallies and tricky plays. After an intense kill from middle hitter Kendyl Paris that ended one of the set’s longest rallies that was immediately followed by the second service ace from the Cats, the Gators put forth all they had in an attempt to claim the first set. Their efforts ended in multiple attack errors, continuing to give the Wildcats an edge. With the teams tying in the number of kills, the Gators managed to slightly narrow the gap in scoring. However, the Wildcats brought the heat that they knew was required to dominate one of their fiercest rivals yet, and they took the set 25-15.

Florida seemed as if they would tie the match early on in the second set, but with clean kills from Brooke Morgan and Leah Edmond, the Cats continued to challenge the Gators’ abilities. That coupled with several attack and ball-handling errors gave the Cats the slight edge in the beginning. When Florida threatened to take over the lead, the Wildcats brought more Halloween tricks, like Lilley’s kill on their first hit of the play, to keep the Gators on their toes.

After a strategic timeout by Florida, the second half of the set intensified. Edmond proved that her SEC player of the week title was well-deserved with three consecutive kills, one of which was from the back row. Throughout the whole set, Kentucky’s lead was much narrower than in the first set. The Gators remained resilient with surprises of their own for the Wildcats. Kentucky responded to the best of its ability, but ended up with several self-inflicted attack errors and kills to which they could not respond.

On Lilley’s serve, the Cats scored six straight points and gave the Gators a true challenge in taking the set. Through an extremely long-fought set with several close moments, the Wildcats took the set with Alli Stumler’s seventh kill of the match. Florida scored 18 points in the set.

“By the third set you’re getting kinda tired cause you’re serving so much,” Edmond said. “You never know what they’re gonna give you… it’s good for keeping us honest and making us have to actually read.”

Going for the sweep, the Wildcats continued their streak of intense play— but the Gators had to bring more to the table to be able to upset the Wildcats. They forced longer rallies, began successfully blocking hits, and caused the Cats to think on their feet like they were not required to do in the last two sets. Just like the first two, this set began with Kentucky in the lead. The Gators struggled through the first half trying to conquer the Cats.

With Kentucky’s offense reaching new levels of challenging, the Gators had to respond quickly. When many of Kentucky’s star players of this game were subbed out, the Gators seemed to take advantage of new opportunities to score. They began targeting the weaker areas of the Wildcats’ defense in an effort to take the match back. But with a hitting percentage that more than tripled that of the Gators, the Wildcats did not let up. In one of the longest, most challenging three-set matches of their season, the Cats swept the Florida Gators, who scored 20 points in the set, with a final, clean kill by Edmond.

This win ties the current win streak with the longest under head coach Craig Skinner. He attributes the successful sweep to the heavy pressure that the Cats’ offense put on the Gators combined with the hard practicing that focused on the defense.

“Our floor defense has been a big improvement over the last few weeks.” Skinner said. “[Lilley] was insistent a lot, so she had options to set and she made some great decisions. [The team] were scheming on some players early in the match and she recognized that.”

The Wildcats will be in Oxford, Mississippi, on Sunday, where they will face the Ole Miss Rebels for the second time this season at 2:30 p.m.