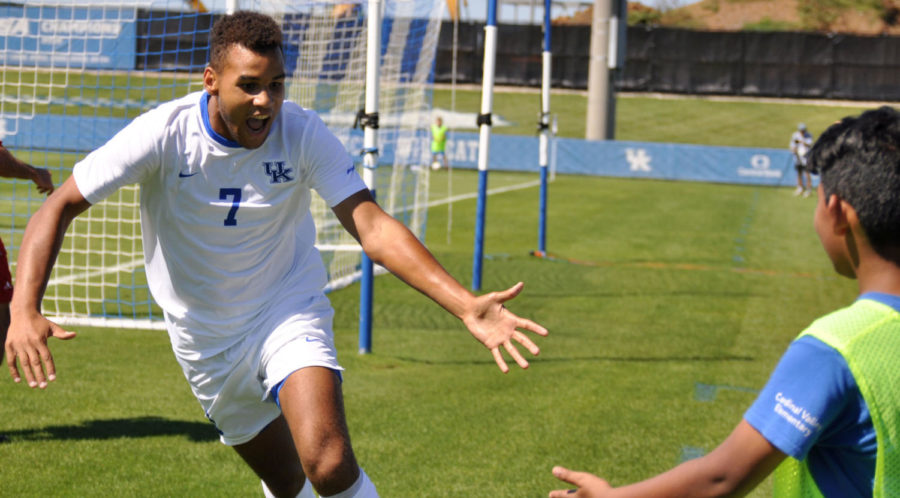 UK men’s soccer forward J.J. Williams has provided support for the team’s success on the field.

Off the field, however, his success stretches beyond numbers.

The Cats lost seven seniors prior to this season. With only two seniors and so many new players on the roster, Williams said he wasn’t sure about how things were going to go.

Williams said that other team captains have to take the weight of responsibility when things don’t go well. However, after having played with previous team captains such as Napo Matsoso, Jordan Wilson and Landon Souder, Williams said he believes that he’s meant to be a team captain.

The new team captain brought change to his team– something he didn’t see on his previous Wildcat teams.

“My teammates are so close as a team, you can’t separate us,” Williams said.

A team culture that goes hand-in-hand with being a tight-knit team is a part of that change. That echoes back to what he said about making sure the “culture was right.”

Williams referred to the roster reboot and his leadership opportunity as catalysts for the new culture. As he put it, the new culture was sculpted by his teammates.

“That culture makes us easy to play with, but hard to play against,” Williams said. “The reason we’re successful is because we’re all so close.”

UK’s opponents might agree with him. The Cats are off to one of the program’s best start to a season, and Williams is a big part why. He’s near the top C-USA in goals scored and goals-per-game.

How did Williams develop as a leader on and off the field? His start goes back to his Alabama days.

The Montgomery, Alabama, native led Alabama Christian Academy to a 21-0 record his senior year in 2016. He was named Alabama High School Player of the Year that same year.

Williams credited his Alabama and Kentucky success not just to his hard work, but to someone who helped him along the way.

“My trainer Katrina [Wilson] back home is the one who introduced me to the game when I was six,” Williams said. “Since then, she has just been working with me day in and day out.”

Wilson uses unique strategies to help Williams on the field. One of those strategies is analyzing different successful international players like French striker Thierry Henry and Ivorian striker Didier Drogba.

After Wilson breaks down those players’ styles of play, she tries to mold Williams after them.

“[Thierry] Henry, if you think about it, is a bigger guy and crafty. [Didier] Drogba is also big and played against center backs, but he was crafty too,” Williams said. “Whenever I get in big situations, I have to get technical just like them. I remember one summer Katrina told me ‘You can’t be one-dimensional.'”

Williams said that Wilson is more than a trainer to him.

“She’s just like family. The best part is when I’m on the field and she yells at me,” Williams said. “She tells me how it is to make me the best player I can be.”

Now that he’s halfway through his junior year, he is slowly creeping up on his senior year. Williams said that, even as a junior, he already has expectations for next season. He wants his legacy to be about both himself and his teammates.