Stoops trying to limit distractions while keeping excitement up 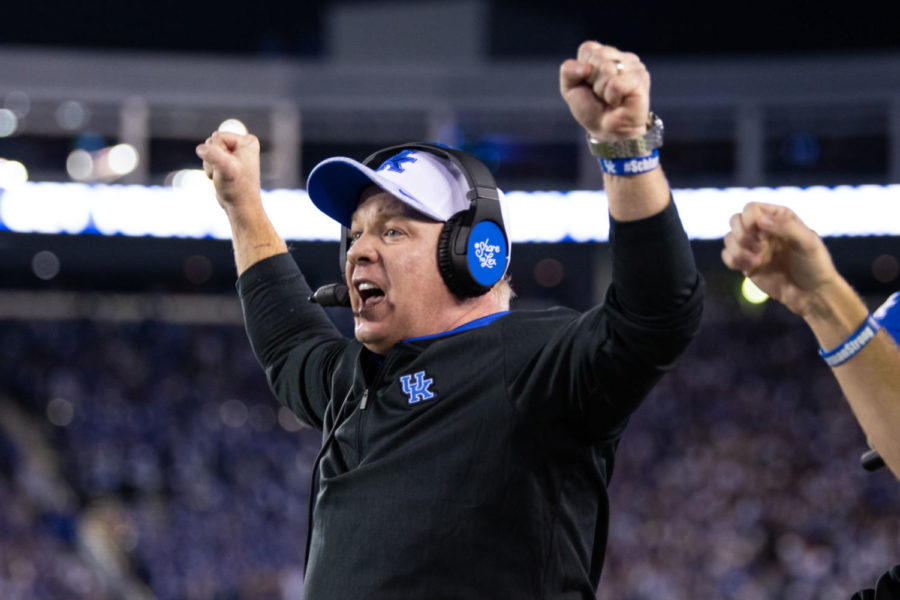 It’s no secret that this weekend’s football game for Kentucky is massive, and head coach Mark Stoops knows that.

Typically, head coaches try to steer their players away from pregame hype on social media, but with what’s up for grabs this weekend, Stoops knows it’ll be tough to prevent his players from hearing the hype.

“You can’t shy away from it, there’s too much information out there, they know what’s going on, and that’s OK,” Stoops said in his weekly Monday press conference. “They’re allowed to be excited.”

A chance to play in the SEC Championship is on the line this weekend, as the winner between this weekend’s game of Kentucky versus Georgia will be crowned the SEC East champions. It’s the first time in the Stoops era that Kentucky has seriously contended for the SEC East title, and the first time in a long time that Kentucky has legit chances to play in the SEC Championship game.

Tickets for this weekend’s game have been sold out for nearly a month, and the game will be broadcasted in the CBS primetime afternoon slot. It’s the first time Kentucky has appeared in the CBS afternoon game all season.

“I don’t need to build them up on that, probably more need to calm them down and just again go through the process of what we’ve done to put ourselves in this position, and go about our business and have a normal week,” Stoops said.

Having normal weeks and efficient practices are what’s led to UK being 7-1 and a chance to play in the SEC Championship. In order for UK to have its best shot to move to 8-1, Stoops said he believes that his team needs to do the same thing they’ve done the previous eight weeks, even if this weekend’s game is more significant than the others.

“The situation changes, that’s what I always say,” Stoops said. “Situational, what’s the situation? The situation is the fact is we’re playing for the East. What are the football keys and what’s our motivational piece? That approach won’t change.”

To keep the approach the same, Stoops won’t have a deep talk about what a win over Georgia would mean.

A win would give UK a chance to win its third SEC Championship, the first since sharing the regular-season SEC title with Georgia in 1976.

Kentucky has never competed in an SEC Championship game since the game debuted in 1992. If all that were to change, it would have massive effects for the Wildcats, such as in recruiting and possible bowl game destinations.

Because of the pressure this weekend’s game carries, Stoops is electing not to bring up the history and implications with this team, so the players focus on the task at hand instead.

“When I have (talked about the history) in years past, it’s kind of been counterproductive to me,” Stoops said. “It’s more it is what it is. It’s this year; this is this year’s football team. We are who we are and you are what you are on film.”

Nothing Stoops does or doesn’t do will take away from the significance of the game, but he’s trying to limit the team’s distractions while keeping the excitement up for this weekend’s game.

“I think the situation, it is what it is. They’ve worked hard to put themselves in that position, but we just got to stay consistent and be the best version of ourselves we can be,” Stoops said.