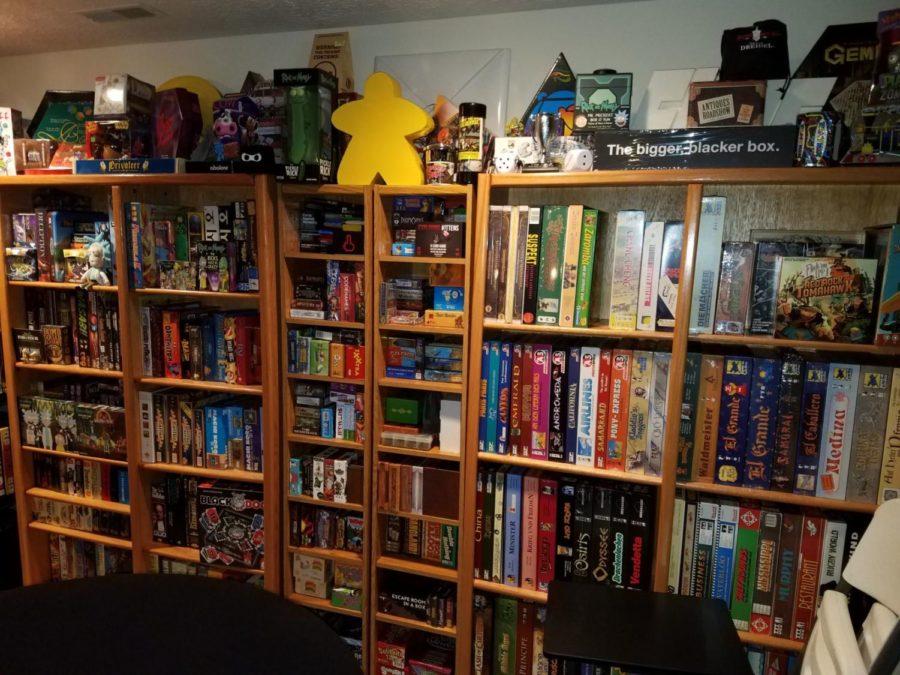 Everyone has a favorite board game.

Some people keep Monopoly in the china cabinet to pull out when the family comes over during the holidays or a deck of cards in the junk drawer just in case their friends want to play around the dinner table.

Games are entertaining, engaging and most of all, fun. Tony Elam would know. He has about 7,800.

“I always liked games growing up, but I lived in a small town in Louisiana, and I didn’t have access to much. I had Monopoly, Scrabble, Clue and just a few of the normal games that people would see back in those times,” said Elam, Director of Strategic Initiatives in the College of Engineering and Associate Director of the Center for Computational Sciences.

It wasn’t until 1971, his freshman year at UK, that Elam started to become interested in the types of games he collects today. He found an Avalon Hill war game at the old Turfland Mall on Harrodsburg Road, and his wife bought it for him because he thought it seemed interesting. Elam started playing and was hooked.

“I started buying more of these Avalon Hill war games, and back in the early seventies that was the most sophisticated kind of games you could get,” Elam said. “They were historical war games about fighting the Battle of Gettysburg, D-Day, great battles in history. But they were fun and intricate, and I really liked them.”

Elam had a growing collection of these war games by 1974, the year Dungeons and Dragons was released. Although Elam said that the rules were poorly written at first, and he switched over to playing Tunnels and Trolls temporarily, D&D soon released a new edition with updated rules that was much better. As the first role-playing game of its kind, D&D was a hit with gamers everywhere.

Elam became a nationally renowned Dungeon Master and would travel to gaming conventions to help run tournaments throughout the late ’70s and early ’80s. Different versions of these role-playing games were being released to keep up with the trend, like Call of Cthulhu. As a collector, he purchased them all.

In the late ’80s, Elam began to collect games dated back to the 1800s. He said it’s difficult to find them now, especially in good condition, because many are missing pieces or have crumbling cardboard, but games from this time period have some of the most beautiful artwork.

In the late nineties, Elam became interested in the European gaming industry. The United States had a dominated gaming market with few companies releasing different versions of the same game each year, but the market in Europe was filled with multiple small companies who would frequently release new and innovative games. Elam purchased a German version of a game called Settlers of Catan and then expanded his collection to include more games from Europe.

“They have a big board game convention every year in Essen, Germany. That’s on my bucket list,” Elam said. “I’ve been to England a few times, and every time I would go I would buy as much as I could carry in my suitcase or boxes. I’ve always enjoyed seeing the different designs and new gaming mechanics.”

Elam’s favorite game is called Cosmic Encounters, but some of his favorite games to collect are those with miniatures, and he has over 12,000 miniatures in total. His role-playing game collection, which included all his Dungeons and Dragons games, consisted of over 1,000 pieces and is now located in the National Toy Museum in New York. He has parted with a few other pieces of his collection, including his Magic the Gathering card collection, which included a card called the Black Lotus that Elam valued at $10,000 to $15,000.

The remainder of Elam’s table-top game collection is stored library-style in the basement, bedrooms and library of his house here in Kentucky. He purchases games online to add to his collection but also occasionally buys from local game stores. Elam also backs game developers through Kickstarter to show his support and gain special access to new releases. He has Kickstarted over 300 games and is looking forward to the release of one of these games, Joan of Arc, in the next six months.

Elam’s final role in the world of gaming is on the selection committee for the National Toy Hall of Fame. Every year, he is asked to narrow down a selection of 12 toys to his top three.

“It’s something I have really enjoyed doing. I take it very seriously,” Elam said. “Having an engineering background, I have my spread sheet, and I have my categories and criteria, and I read every toy and decide is it iconic? Does it foster discovery? Is it innovative? It is something that I get to do every year, and I always enjoy that.”