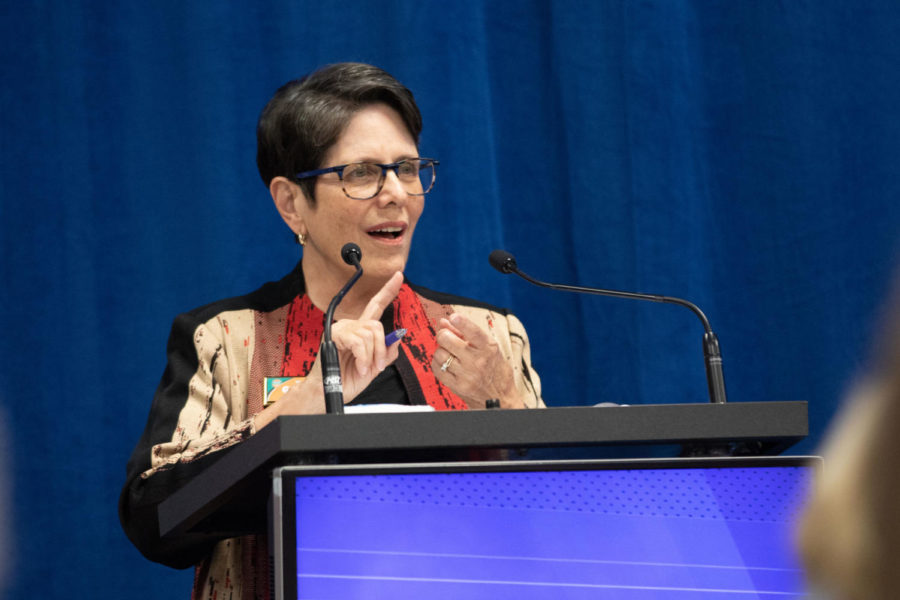 The race to be Lexington’s next mayor is heating up, but while the city’s candidates may have their sights set on having the run of the town, neither have forgotten about another community right in their own backyards.

The Lexington Mayor’s office is roughly just a mile from the heart of UK’s campus– it might not be a stone’s throw, but a few recent steps have been taken to narrow the gap between Main Street and Avenue of Champions, according to Mayor Jim Gray.

Linda Gorton and Ronnie Bastin are each aiming to take over the reins of Lexington from Gray come Election Day on Nov. 6. And to do so, both are hoping to get the support of the city’s voters, some of whom are part of the UK community.

While voter turnout among college students is stereotypically the lowest of any population, leaders of the Lexington community are calling for that to change.

“It’s essential for University of Kentucky students to get involved in local elections,” current Mayor Jim Gray said. “While you’re in school, and perhaps beyond, you’re citizens of this city… citizens we need to hear from as we make decisions that affect the entire city. You’re very important to Lexington. You bring energy and bright young minds that fuel our economy. I encourage you to make your voice heard.”

After serving on the Lexington-Fayette Urban County Council for 16 years and as the city’s vice mayor for four years, Gorton, a UK alumna, has decided to dust off her jacket and get back into the political arena with a bid for mayor.

While Gorton said she will take a fair share of experience into the job, should she be elected mayor, she said she’d also be bringing a love for the community, including UK.

“We love the university. We love that it’s in the heart of our city, and that the students add so much to the vibrancy,” Gorton said. “We’re all in; we have lots of blue and white clothing.”

Aside from her adoration for the UK community, Gorton is resting her campaign on the pillars of ideas like creating a safe and growing city. She said she is aware of the city’s crime, and hopes to tackle crime using her background as a registered nurse.

“The way we’re going to lower crime is to lower the drugs,” Gorton said. “As a city and a community, we’ve got to have an approach to this thing where we include public safety, we include addiction recovery experts, we include mental health experts.”

Gorton said she’s also putting a premium on maintaining a growing economy by preserving jobs in the community.

UK currently serves as the county’s largest employer, employing about 14,000 people, according to statistics from UK. This makes these jobs, and even those for recent graduates, important to the “health” of the city, according to Gorton.

“One really important thing to me is that we make a concerted effort to have enough available jobs here that our UK graduates can stay here,” Gorton said.

Gorton said these pillars of her campaign will help to create an increasingly better “quality of life” index in the city.

Mayoral candidate Ronnie Bastin is also relying on an extensive career in public service to carry him into the winner’s circle come election night.

The UK alum has substantiated a more-than-30-year career on the Lexington Police force, and was eventually appointed police chief in 2008. Bastin has also served as the city’s Public Safety Commissioner since 2015.

That experience has translated into knowledge on how to confront the city’s crime issues, according to Bastin.

As mayor, Bastin would push for “tough” enforcement for violent crimes, but he said he knows you can’t “arrest your way out of crime.”

Bastin said that promoting a healthy economy and securing jobs for the community is also a priority of his. He plans to shift a portion of his focus toward the city’s small business operations as well.

“In order to create jobs, we want to attract jobs to Lexington,” Bastin said. “But an important responsibility of a leader is to be able to manage that… We want everyone to stay in Lexington.”

Aside from his badge and career, Bastin said one thing that has always been at the core of his life is UK. Bastin said that if he were to be elected mayor, he realizes the importance of a strong relationship between Lexington and the university.

“I have more skin in the game when it comes to UK than almost anybody I know,” Bastin said.

Just three weeks away from Election Day, Bastin has said that he would be able to get to work from the minute he is elected mayor, thanks to his long career in the city.

“I know what works and what doesn’t work. I’ll be able to go in day one… There’s no learning curve for me,” Bastin said.

While Bastin is confident in his ability to effectively lead as the city’s mayor, he said he’s still encouraging voters to look at the differences between each of the candidates.

As both Gorton and Bastin ready up for the last legs of their respective campaigns, those in the UK administration are hopeful that, regardless of the outcome of the election, the city of Lexington and UK can continue to maintain a prosperous relationship.

“We are fortunate to have a strong and dynamic relationship with the community that is home to our main campus, a relationship we look forward to growing as our fortunes and futures are inextricably linked,” UK President Eli Capilouto said. “Both candidates– as with Mayor Gray– have recognized the impact UK has in terms of fueling Lexington’s economy and helping ensure a highly skilled workforce. They are committed to UK as UK is committed to Lexington.”