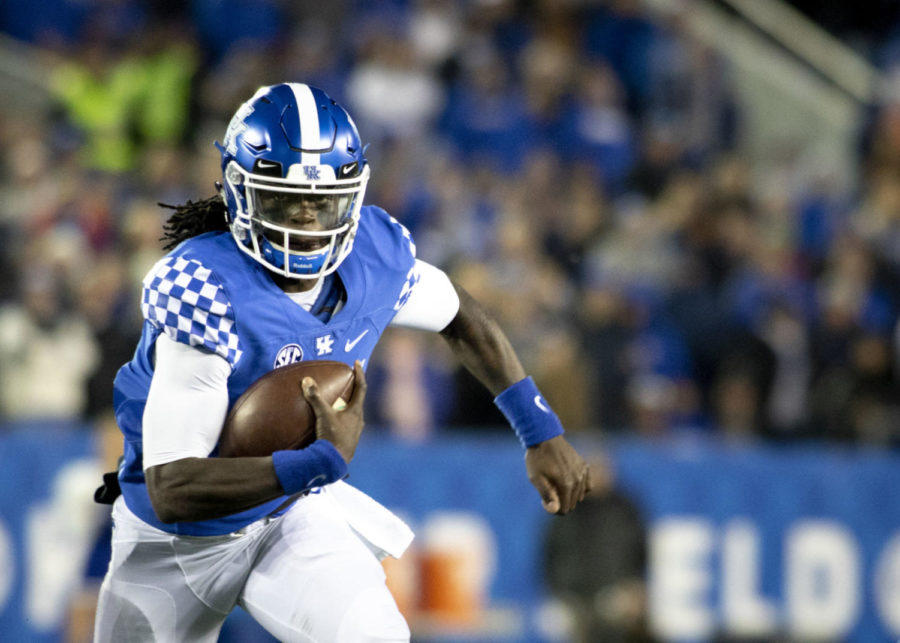 Kentucky Wildcats quarterback Terry Wilson runs down the field during the game against Vanderbilt on Saturday, Oct. 20, 2018, at Kroger Field in Lexington, Kentucky. Photo by Arden Barnes | Staff

The UK football team saw another bump in the road at home against Vanderbilt Saturday night, but was able to draw out the win 14-7.

The game marked their second straight in which the offense struggled to get anything moving. The Cats finished with 298 total yards, with 201 of them coming in the fourth quarter.

UK felt their offensive struggles almost immediately after their first possession began. After a modest rush by Benny Snell Jr., quarterback Terry Wilson fumbled the ball, giving the ball to the Commodores.

The fumble gave Vanderbilt a short field to work with, and the first touchdown of the game was the result of the ensuing drive, and wouldn’t retake the lead until much, much later.

Almost immediately after the touchdown, the Cats coughed the ball up again after a botched lateral pass to Lynn Bowden Jr., but the Commodores couldn’t make anything of it.

The offenses would continue to struggle back and forth with four consecutive drives that ended in punts. Nothing scoring-related would take place until the end of the second quarter, when Bowden made a toe-tapping catch on a pass from Wilson to draw the teams even. The score would remain tied at 7-7 until the fourth quarter.

The third quarter opened with what would have been a kick return touchdown by Bowden called back by a holding penalty on receiver Tavin Richardson. The Cats spun their wheels and had to punt.

On the ensuing Vanderbilt drive, cornerback Derrick Baity nearly secured yet another interception on the season, but the play was ruled defensive holding on Baity. The Commodores drove into the red zone, but the strong winds in Lexington swerved the field goal attempt wide left.

Unfortunately, the same thing happened to the Cats on the next drive. They drove down the field, but their 39-yard field goal attempt came up short, as the score remained 7-7.

The Commodores applied heavy pressure on UK in the fourth quarter, as they drove down the field into field goal range. Knowing the disadvantage the wind brought, the Commodores elected to keep their offense on the field on fourth down before linebacker Kash Daniel caused a fumble, leading to the game’s final go-ahead drive.

Snell then showed his often game-breaking fourth-quarter production as he led a UK march down the field and right into the end zone with just over eight minutes left in the game. From there, Vanderbilt struggled to create anything before turning the ball over to the Cats again, this time forced by star defensive end Josh Allen and recovered by safety Mike Edwards.

UK got to kneel the game out, and they walk away with their sixth win in seven games. They’ll take on Missouri next Saturday in Columbia at 4 p.m.