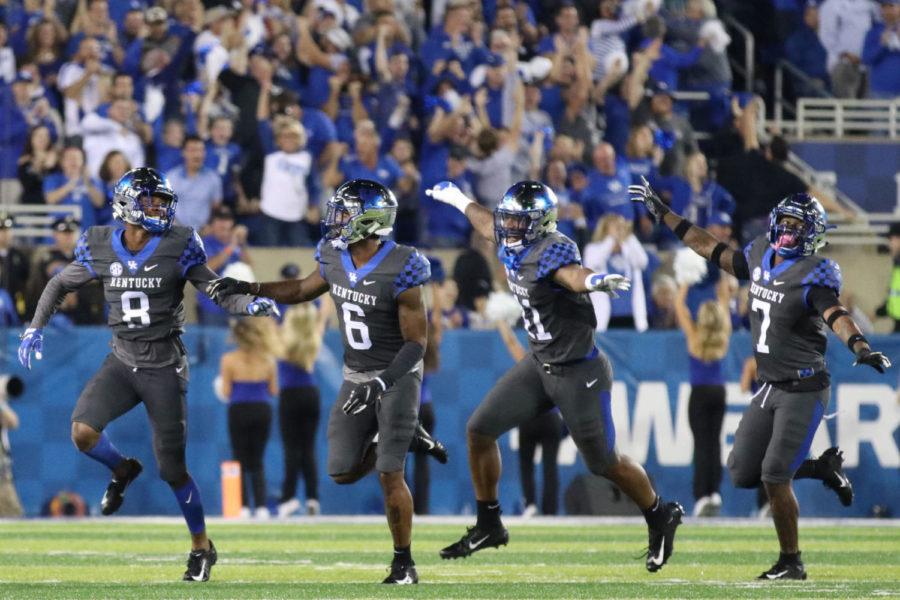 Kentucky defense celebrates an interception during the game against South Carolina on Saturday, September 29, 2018 in Lexington, Ky. Photo by Chase Phillips | Staff

Kentucky football’s defense had time to heal up over the bye week and fix some issues they’ve had in the first half of the season. Defensive coordinator Matt House and several defensive players spoke with the media after practice Wednesday to give some insight on how they’ve worked over the bye week and what they expect this weekend from Vanderbilt’s offense.

“Very balanced, explosive runners, veteran quarterback who knows where to go with the ball,” House said of Vandy’s offense. “Really good receiver, good tight ends, they present a challenge. And they do a good job of using multiple sets.”

Last year after UK’s bye week, the Cats faced Mississippi State and lost 45-7, but this year there’s talk about how different the off-week has been for them.

“I think every year’s different, we’re a more mature football team. I think we’ve definitely practiced with more energy, more intensity, and I’d expect that from this group,” House said.

Kentucky junior linebacker Kash Daniel said this past week he and his teammates have had a different mentality and came out with “high energy and high focus,” and it has given the defense a good opportunity to break down everything they’ve done so far.

“We got a lot of work done, we got a lot of stuff corrected that in a week’s time [that] takes a little more effort to get corrected,” Daniel said. “With us having extra time we got to walk our way into it and make sure that everybody’s got the right communication, the right checks, and everything in between.”

Communication is something that Daniel said is key for his defense, and something they have to get better at.

“If you’re in a coverage and you don’t have the right checks on the secondary, you’re not giving the right checks to the [defensive] line or the outside linebackers, it screws up the whole defense,” Daniel said.

Daniel said Vandy’s offense will present several challenges for the Cats due to their explosive running backs and how physical the unit is as a whole. Wildcat defensive back Mike Edwards believes the bye week gave his team a jump-start on the Commodores and is ready for the challenge ahead of them.

“Different motions they try to create, they try to take you off your landmark and try to confuse the defense,” Edwards said.

Kentucky will face Vandy this Saturday at 7:30 p.m. at Kroger Field. The game will be shown on the SEC Network.